As fans wait for 'Halloween Kills' to be released, here's what you need to know about its connection to Mike Myers, Jamie Lee Curtis and South Jersey

"Death has come to your little town, sheriff.''

His hometown of ... Haddonfield.

While the iconic Halloween slasher film is set in a fictional town of Haddonfield, Illinois, it is inspired, at least in part, by the upbringing of the late cinematographer Debra Hill, who was born in Haddonfield, in Camden County, and later moved to Philadelphia. 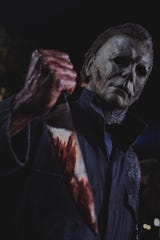 The 1978 holiday classic starred Jamie Lee Curtis, and has spawned a canon of 11 films so far, not to mention novels, comic books, a video game, countless trick or treat costumes, famous quotes, a permanent change in how we view a Captain Kirk mask — and much more. (The character Mike Myers is not part of the plot of "Halloween 3,'' so you can argue among yourselves whether the canon is really 10 films. More on that later.)

Myers was sent to a sanitarium after he murdered his sister, Judith. In the first film, he escapes and returns to terrorize the unsuspecting people of Haddonfield on Halloween. That movie, written, directed and scored by John Carpenter, was co-written by Hill. It is said to have been inspired by the Alfred Hitchcock jump scare classic "Psycho.''

He's back: Michael Myers is back to his bloody shenanigans in 'Halloween Kills'

The 11th film in the franchise, 2018's "Halloween'' (directed by David Gordon Green and written by Green, Danny McBride and Jeff Fradley), is a direct sequel to the original film and also starred Curtis. That "Halloween" picked up 40 years after the events of the original. Masked murderer Meyers returned to his hometown, where the iconic survivor of Meyers' previous massacre (Curtis) was waiting to face him. You can't keep a bad man down, as Michael Myers demonstrates yet again in "Halloween Kills." (Photo: Universal Pictures)

At the time, Asbury Park Press entertainment writer Alex Biese called the 2018 film "an incredible return to form for a franchise that lost its way decades ago. Green and company have disregarded the original's seven sequels, its 2007 remake and that film's 2009 sequel, crafting their movie as a direct continuation of only the first film.

"So how did Green get it so right?,'' Biese asked. "By sticking to the pure terror and merciless minimalism that made the original 'Halloween,' and much of Carpenter's work in general, so scary to begin with.''

Halloween 2021: Scary attractions, parties and concerts sure to thrill in NJ, NY and PA

Next up in the franchise is "Halloween Kills,'' set to be released on Friday, Oct. 15, and also starring Curtis and Nicholas Castle, reprising his role as Myers. The movie will be released to theaters and available to stream on Peacock. A follow-up film, "Halloween Ends,'' is scheduled to hit theaters Oct. 14, 2022. 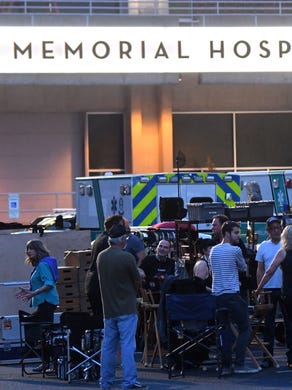 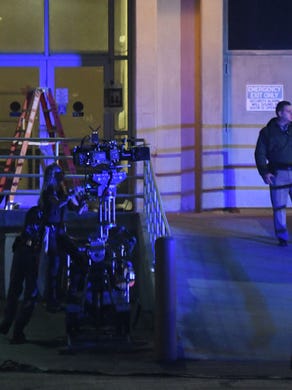 The cast and crew of "Halloween Kills" film a scene in and around the Cape Fear Community College campus in downtown Wilmington, N.C., Monday, October 7, 2019. The horror sequel starring Jamie Lee Curtis began shooting in Wilmington in mid-September. "Halloween Kills" is the first of two sequels set to close out the latest "Halloween" trilogy, with "Halloween Ends" expected to shoot back to back with the film. MATT BORN/STARNEWS
Fullscreen

The area around the Cape Fear Community College campus was set up for the filming of "Halloween Kills" in downtown Wilmington, N.C., Monday, October 7, 2019. The horror sequel starring Jamie Lee Curtis began shooting in Wilmington in mid-September. MATT BORN/STARNEWS
Fullscreen

The area around the Cape Fear Community College campus was set up for the filming of "Halloween Kills" in downtown Wilmington, N.C., Monday, October 7, 2019. The horror sequel starring Jamie Lee Curtis began shooting in Wilmington in mid-September. MATT BORN/STARNEWS
Fullscreen

'Debra Hill is a hero of ours'

Death came too early for filmmaker Hill, considered a pioneer for women in Hollywood. The South Jersey producer and filmmaker died of cancer at age 54 in 2005.

A documentary about the Hollywood trail blazer was said to be in development 10 years after her death, by DPYX.

Creators Marcy Boyle and Rachel Holzman of DPYX said at the time they hoped to preserve an important piece of Hollywood history and help empower female filmmakers. 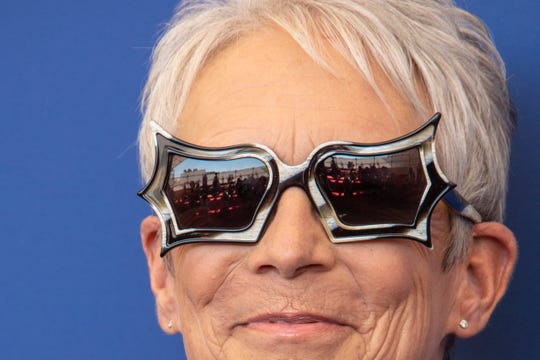 Sept. 8, 2021: Jamie Lee Curtis poses for photographers, reflected in glasses, at the photo call for the film 'Halloween Kills' during the 78th edition of the Venice Film Festival in Venice, Italy. (Photo: Joel C Ryan, Invision/AP)

"Debra Hill is a hero of ours," Marcy Boyle told the Courier-Post in 2015. "Not only did she break into the industry on her own, through intelligence, talent and tenacity, but she produced so many films that have become part of pop culture."

"We hope the next generation of filmmakers can be inspired to move forward on the path blazed by women like her and so the industry can be reminded that women have been instrumental in some of the greatest success stories in the film business," Holtzman said at the time.

Hill was born on Nov. 10, 1950, in Haddonfield. Upon graduating from Haddonfield Memorial High School in 1968, she became a script supervisor and production assistant on documentaries in the early 1970s before getting her first big break by co-writing "Halloween" with Carpenter.

When she passed after a long struggle with colon cancer, Carpenter told the Associated Press working with her was "one of the greatest experiences of my life – she had a passion for not just movies about women or women's ideas but films for everybody".

So why Haddonfield, New Jersey?

Carpenter has said in numerous interviews over the years that the setting for the Halloween classic was influenced by his own growing up years in Bowling Green, Kentucky, where his family lived in a log cabin near the university of the same name. The latest film was shot in Wilmington, North Carolina.

However, it is not difficult to imagine the leafy side streets and Victorian homes in the jump scare classic taking place not far off Kings Highway right here in New Jersey's leafy suburbs.

In fact, a sense of suburban isolation figures big in what makes the fairly spare film so powerful after so many years. 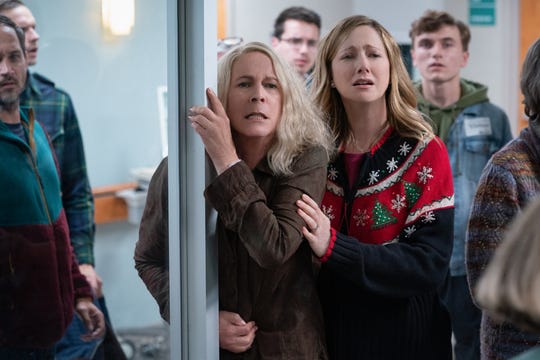 As for Hill, she had nothing but nice things to say about the town whose name she lent to what would become a $640 million franchise (so far).

"Haddonfield was a place that I loved,'' she told Courier-Post columnist Jim Walsh in 1999 as part of a Halloween column about the local connection. "It's really a beautiful community.

`Basically, I used the name to pay homage to the town where I grew up.'

Tammy Paolino is Features Editor for the Atlantic South region of the USA Today Network.  She’s an award-winning reporter and editor who  loves to cover trends, diversity, the arts, food and drink. Reach her at tpaolino@gannett.com or 856-486-2477 or on Twitter @CP_TammyPaolino. Help support local journalism with a digital subscription.