Plan to move the games of the Hammonton Hawks football organization to William T. Capella Field took a step forward. 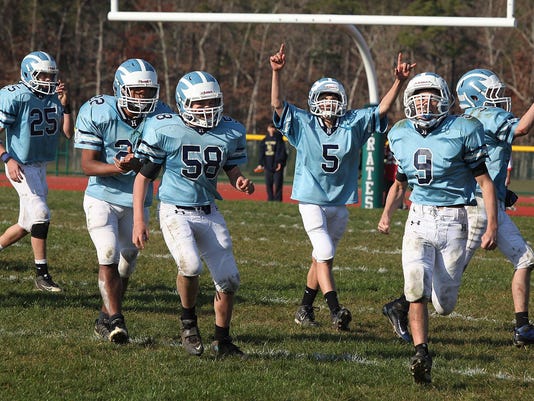 HAMMONTON - A plan to move the games of the Hammonton Hawks football organization to William T. Capella Field took a step forward on Dec. 14 at the monthly Town Council meeting.

The Hammonton council agreed to enter into a shared service agreement with the Hammonton Board of Education, which will allow improvements to be made to the facility in order to facilitate the move from Hammonton Lake Park to William T. Capella Field.

The school board will also have to approve the measure for shared services.

“We are trying to move as quickly as we can,” said Hammonton Councilman Mike Torrissi, who heads the education committee.

The plan calls for new lights on the football field as well as the parking lots. The Hawks, who are members of the Atlantic County Junior Football League and once called William T. Capella Field its home field, have been playing games in the outfield portion of the baseball field at Hammonton Lake Park.

The project also will call for improvements to bleachers, constructing a press box and improving the concession stand. As of now, the Hawks expect to play their games at William T. Capella Field in 2016. The long-term goal is for the facility to be used for practices, as well as house equipment.

“I think the school will benefit as well because they can use the lights for their activities,” Hammonton solicitor Brian Howell said.

Town Council also took the time during the meeting to thank and say goodbye to Howell and Councilman Ed Wuillermin. Howell is stepping down as the town’s solicitor after 10 years, and Wuillermin, who has served two separate terms on council, will not be on council once it is reorganized on Jan. 4.

They both were presented with a plaque for their service to the town.

“Ed Wuillermin is probably one of the smartest men I know,” Hammonton Mayor Steve DiDonato said. “He is always right, he is a leader who always does the right thing for all 15,000 people. He never thinks of himself, and always thinks of other people. He served on council twice. He has served six years now. His integrity and dedication is second to none.”

Praise was high for Howell, too.

“From one attorney to another, it wasn’t easy and it couldn’t be easy, but you never let them see you sweat,” Deputy Mayor Tom Gribbin said to Howell. “You served the town well over these 10 years and saved them a lot of money. I admire you, not only as a friend, but also as a colleague. You have a great ability to defuse tense situations, which no doubt has been a benefit to this town. You served for the people and not the politics. Your will forever be seen as a model for how all solicitors should conduct themselves.”

• Approved tax exception ordinance for existing residential dwellings and commercial and industrial structures. The exemptions are in place to make it easier for residents and business owners to make improvements to their homes or structures.

• Approved $1,650 for the engineers to complete and submit applications to the state Department of Environmental Protections and the Pinelands Commission to treat the lake.

The next scheduled monthly meeting will be 7 p.m. on Jan. 25 at Town Hall.