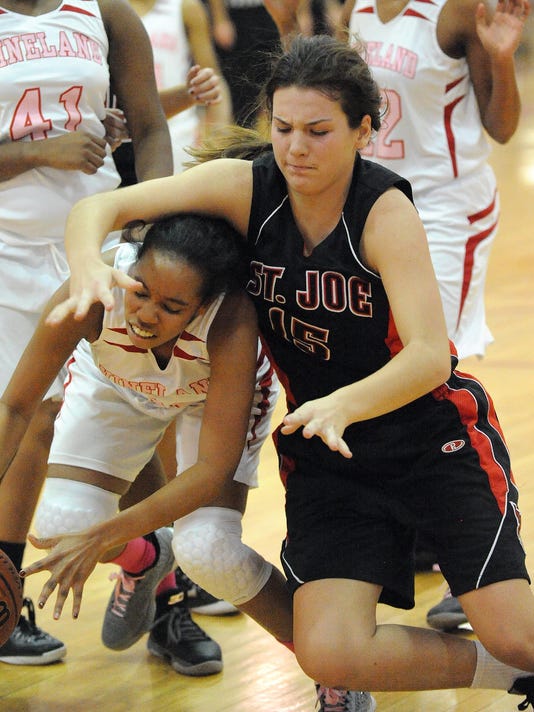 St. Joseph 48, Pleasantville 4 – The Wildcats jumped out to a 24-4 halftime lead, and kept the Greyhounds off the scoreboard for the entire second half during the season opener for both teams.

St. Joseph 50, Vineland 46 – The Wildcats outscored the Fighting Clan 17-11 in the fourth quarter to rally from behind for the win.

Brandywine (Del.) 30, St. Joseph 25 – Galasso scored 10 points and added seven rebounds as the Wildcats dropped their opening-round game in the Kaitlin Anzelone Memorial Bracket at the Boardwalk Classic in Wildwood.

Gerdes had seven points and five rebounds in the loss.

St. Joseph 42, Mastery Charter (Pa.) 14 – The Wildcats rebounded in a big way at the Boardwalk Classic, as Fox scored 12 points and pulled down six rebounds in the victory.

Gerdes and Galasso had nine points and eight points, respectively, for St. Joseph, who outscored Mastery 24-3 in the first half, which included a defensive shutout in the second quarter.

Coming up – St. Joseph is home against Wildwood Catholic on Jan. 6 and Middle Township on Jan. 8 before playing at Buena on Jan. 11.

Auris Tverijonas and Terrence Pough both registered 13 points and Marcellus Ross chipped in 10 in the setback.

St. Joseph 53, Egg Harbor Twp. 40 – The Wildcats picked up their first win of the season as Herrin scored 14 points and added eight rebounds at the Ocean City PBA Shootout.

Drew Hohman scored eight points and Kevin Witasick chipped in seven in the win. St. Joseph started out the game with a 16-9 first quarter and entered halftime with a 30-17 advantage.

St. Joseph 66, ACIT 39 – The Wildcats used a balanced attack to cruise past ACIT as Herrin and Hohman each scored 15 points. Tverijonas netted 13 points and Pough added 11 in the win.

St. Joseph 66, Atlantic Christian 46 – Tverijonas had 16 points, 12 rebounds and 5 blocks in the victory. Hohman topped all Wildcats scorers with 18 points, and Herrin added 15.

Coming up – The Wildcats will travel to Wildwood Catholic on Jan. 6 and Middle Township on Jan. 8. St. Joseph hosts Buena on Jan. 11.

Clayton Classic – Iuliucci (106) and Berry (195) both finished second in their respective weight classes. Evan Fallon (120) and Mascioli (220) each took in third.

Coming up – The Wildcats are on the road to take on Palmyra on Jan 6 and Pitman on Jan. 8. The Wildcats then compete in a quad meet at Delran, which includes Salem and Deptford, on Jan. 9. St. Joseph also travels to Burlington on Jan. 11.