Williamstown 46, Hammonton 28 – Any chance of a Blue Devil win disappeared after a poor start in the fourth quarter.

Hammonton trailed by five heading into the final eight minutes, but was outscored 21-8 over that stretch to drop its fourth straight game.

Coming up – The Blue Devils host Penns Grove on Feb. 4 and travel to Washington Township on Feb. 6. Hammonton is back at home against Triton on Feb. 9. 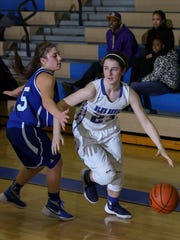 Hammonton’s Dominique Minerva tries to get around a Williamstown defender during a 46-28 setback on Jan. 26. (Photo: Kristian Gonyea/Photographer)

Williamstown 68, Hammonton 43 – Hammonton’s Peyton Mortellite scored a team-high 17 points, including nine from beyond the arc, in the loss.

The Blue Devils’ Pat Costa scored 11 points in the setback.

Marsoreez Bassett chipped in 12 points for Hammonton, which turned a six-point halftime lead into a 21-point advantage with a 25-10 third quarter.

Coming up – Hammonton is at Glassboro on Feb. 4 and at Seneca on Feb. 6.

The Blue Devils’ Anthony Roman (106) and Brian McCarty (152) also put their opponents on their backs, and teammate Vaughn McFerrin (145) completed a technical fall in the third period of his bout.

Hammonton 58, Vineland 13 – Hammonton won 10 of the 12 bouts contested, including seven by pin, in a rout over former Cape-Atlantic Leauge foe Vineland.

Ocean City 34, Hammonton 27 – Hammonton and Ocean City both won seven matches, but the Red Raiders were able to register more bonus points for the victory.

There were four matches that were decided by three points or less with the Blue Devils’ David Diaz (138) winning 8-6 in overtime and David Figueroa (160) earning a 2-1 decision.

Hammonton 36, Penns Grove 28 – Roman (113) and Digiovannangelo (220) each decked their opponents in the victory. Boyle (132) and McCarty added decisions and the Blue Devils also accepted three forfeits.

Coming up – Hammonton is at Clearview on Feb. 3. The Blue Devils then travel to Cedar Creek on Feb. 6 for a meet that also includes Riverside and Palmyra.

Hammonton 4, Gloucester Catholic 0 – Alex Launutti rolled a 211 and a 189 during a team-best 557 series to lead the Blue Devils to a shutout win.

Hammonton 4, Kingsway 0 – Launutti continued to stay hot on the lanes, rolling a 214 and a 198 in a 581 series during Hammonton’s win over Kingsway.

However, teammate Thomas Mature rolled a match-best 245 in a 552 set, as the Blue Devils won for the third time in four matchups.

Coming up – The Blue Devils are tentatively scheduled to compete in the playoffs on Feb. 13.