It was all about cats at the Rollway Skating Rink on Second Road in Hammonton.

HAMMONTON - It was all about cats at the Rollway Skating Rink on Second Road in Hammonton on the weekend as the business hosted the National Norwegian Forest Cat Breed Club Inc. cat show.

One of only three cat shows in New Jersey, the show was a Cat Fanciers’ Association certified event. The CFA is the world’s largest registry of pedigreed cats, and the Hammonton show featured 40 pedigreed cat breeds as well as random-bred household pets.

A total of 180 cats competed in the course of the two-day event, which attracted cat owners from as far away as Canada.

With the end of this year’s cat show season approaching on April 30, exhibitors were eager to earn as many points as possible to bring their cats closer to each owner’s particular goal. 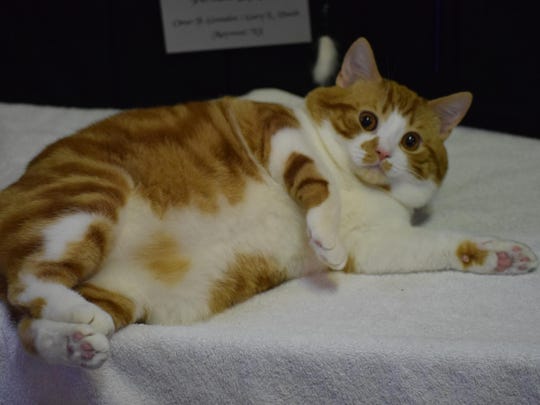 Briar-Mar's Good To Be Me “Manny” is ranked the No. 1 cat nationally. He is a Manx owned by Gary Veach of Maywood, NJ, and he competed in the CFA-certified National Norwegian Forest Cat Breed Club cat show in Hammonton. (Photo: Photo/Jodi Streahle)

Some exhibitors were simply trying to expose a kitten or young cat to the cat show experience. Others were working toward grand premiere or grand champion status while others were striving to get into regional and national competitions, said Sue Robbins, cat show manager and vice president of the NNFCBC.

“This is the biggest show in the U.S. this weekend, which means the most points are up for grabs here,” said Shelby Friemoth who traveled from San Diego, Calif., to compete. 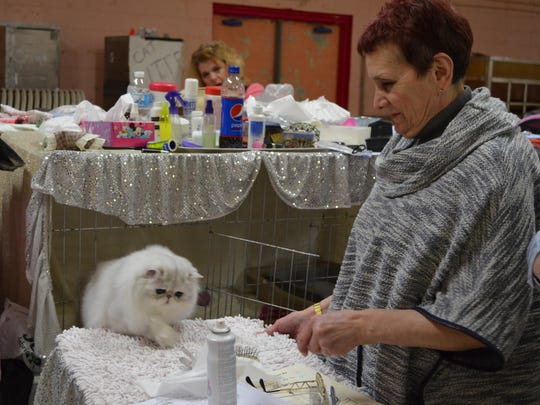 Others like Barbara Giordano of Millville were happy to compete close to home. She has been showing cats for more than 30 years, and entered her shaded silver Persian, Toy Soldier, in the show. “It’s a competition, so you want to win. If not, you still have a good time,” she said.

Six judges participated on Saturday and five judges on Sunday. They described the difference between each breed and the qualities they were looking for in each division to the spectators.

Temperament, presentation, grooming, color, markings, stance and size were among the characteristics that the judges inspected. Owners performed last-minute grooming tasks on their cats, and then offered them rewards once they returned from the ring. 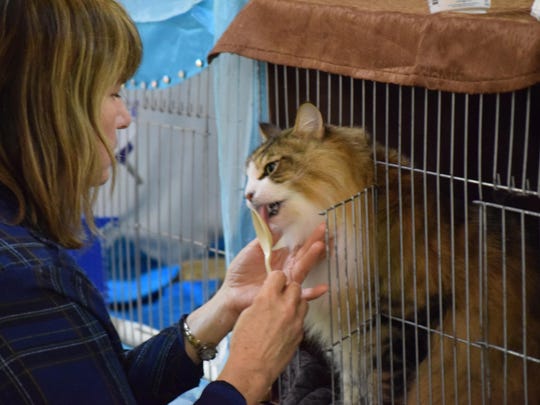 Louis, a Norwegian forest cat, eats a yogurt treat offered to him by his owner, Lucy Lehman of Mulmur, Ontario during the National Norwegian Forest Cat Breed Club Cat Show in Hammonton on Saturday and Sunday. (Photo: Photo/Jodi Streahle)

Lucy Lehman traveled from Mulmur, Ontario with her cat Louis, a Norwegian forest cat. She is working for a national title. She rewarded him for his efforts with a serving of yogurt after he competed. “He loves it, and he always gets a special treat afterwards,” she said. Last year Louis was named a Best All Breed Premier in Canada.

The cat show was presented by the National Norwegian Forest Cat Breed Club, Inc., with assistance from the Delaware River Cats Club, Inc. The show served as fundraiser for South Jersey Animal Shelter/Cumberland County Society for the Prevention of Cruelty to Animals. A $1 discount was given to anyone who donated a can or bag of cat food.