Hammonton’s Dominique Minverva passes the ball during a 46-20 victory over Buena on Feb. 26.(Photo: Kristian Gonyea/Photographer)

Hammonton outscored Pitman 21-7 in the opening half.

The Blue Devils put the game out of reach by outscoring Buena 26-7 over the second and third quarters.

Coming up – The No. 15 Blue Devils played at No. 2 Highland in the opening round of the Group III South Tournament on Feb. 29. The game ended too late for publication. The winner of the game is scheduled to take on the victor of No. 7 Delsea-No.10 Toms River South on March 2.

Gloucester Catholic 58, Hammonton 43 – Josh Troche was the lone Blue Devil to score in double figures, netting 11 in the loss.

The Blue Devils never recovered after getting outscored 25-16 in the opening period and found themselves in 14-point deficit at halftime.

Mortellite led all scorers with 21 points and Marsoreez Bassett netted 11 in the win. Joseph chipped in with eight points, and Pat Costa and Chris Chew both ended the game with seven.

Hammonton outscored Pitman 40-20 in the second half.

Coming up – Hammonton, the No. 14 seed in the Group III South playoffs, was scheduled to open the tournament at No. 3 Toms River East on Feb. 29. The game ended too late for publication. The winner would face the victor of No. 11 Bridgeton-No. 6 Cumberland on March 2 at 6 p.m. 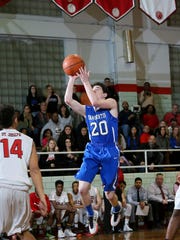 Region 8 Tournament – Hammonton’s Daniel Figueroa, the No. 7 seed at 160 pounds, defeated No. 10 Will Nickerson of Ocean City, 4-0, in the opening round of the tournament, which was hosted by Egg Harbor Township.

Teammates Brett Beebe and Hakeem Parker saw their season come to an end with first-round losses.

Parker, No. 12 at heavyweight, was pinned in the second period by Absegami’s Ben Maggio, who was the No. 5 seed.

The next day, McFerrin won his first wrestleback, decking Penns Grove’s Wayne Scott in 3 minutes, 14 seconds, but lost in the next round to Buena’s Tim Suter, 9-8.

Figueroa, like McFerrin, lost his quarterfinal bout, falling to St. Augustine’s Nick Clark 8-1. The following day, he edged Penns Grove’s Jaquian McPherson in the opening round of wrestlebacks, but then had his season end with a 3-1 loss to Kingsway’s Rory Bushby.