The $203-million project includes South Jersey Gas moving its headquarters from Folsom to the Chelsea section of Atlantic City.

Angela Donio of Hammonton speaks out against the proposed move of South Jersey Gas headquarters from Folsom to Atlantic City.(Photo: Jodi Streahle/correspondent)

HAMMONTON - Hammonton and Folsom councils came together on March 3 in what Hammonton Mayor Steve DiDonato called “a historic meeting” and voted to ask the Atlantic County freeholders to hold off on voting on the Atlantic City Gateway Project until they audit AC Devco, the company heading the project.

The $203-million project includes South Jersey Gas moving its headquarters from Folsom to the Chelsea section of Atlantic City, using county and state funds, according to the council members in attendance. The utility would receive $12 million in tax credits from the Grow NJ program.

The move would also mean a loss of at least 165 jobs for Folsom. The council members also asked for the Local Finance Board to look into AC Devco’s financial shape.

Residents of both Hammonton and Folsom spoke out against the proposed move, often expressing anger at not only South Jersey Gas executives, but also state and county officials.

“It is fair to say I was taken aback,” DiDonato said. “(DuBois) said that they are not staying here because we are in the middle of nowhere. We have to move to attract talent.”

“If we have residents that have to move, like a lot of other municipalities in this country, there are a lot of empty homes,” DiStefano said. “The last thing we need is more empty homes and for sale signs.”

He added: “I take it as an insult. When we met a representative from South Jersey Industries — and I’m paraphrasing — she said that they have to move to attract the best and brightest talent. Everybody in this room should be insulted.” 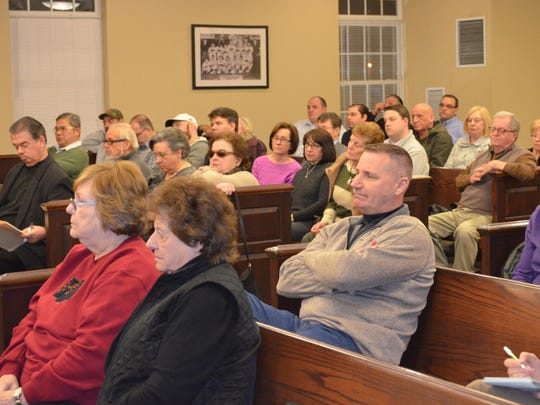 More than 50 residents and business owners attended the meeting to oppose the proposed South Jersey Gas project. If the company's headquarters move to Atlantic City, the Folsom and Hammonton area could lose as many as 200 jobs. (Photo: Photo/Jodi Streahle)

DiDonato argued that the western end of the county has a bigger pool of talent because 30 minutes in every direction is a large community, including Vineland, Philadelphia, and Atlantic City. Having South Jersey Gas in Atlantic City limits the area it can recruit workers.

“I find it appalling that they insult our work force,” Hammonton Councilman Mickey Pullia said.

The Hammonton mayor also explained the project would put county taxpayers at risk if AC Devco should face financial problems.

Buena Vista Township Mayor Chuck Chiarello and Deputy Mayor Teresa Kelly were also in attendance to express their opposition to the move.

“I don’t directly blame Atlantic County for this situation. I blame the rules of the state that allow the Grow NJ and the Economic Development Authority to have this treasure chest of money to offer all these towns and businesses to play hopscotch around the state,” said Chiarello.

The council members also pointed toward the county’s own Economic Development Plan, which was released in September of last year, which advised the county not to poach businesses within the county.

“We need our voices to be heard that we are not going to stand for this any longer,” Hammonton Deputy Mayor Thomas Gribbin said.

Linda Maxwell of Folsom voiced frustration over the incentives being offered to South Jersey Gas for relocating their headquarters to Atlantic City. “I don’t think Atlantic City has a better work pool than we have here ... We are educated people and we are smart people,” said Maxwell.

Sam Mento, president of the Hammonton Board of Education and also a local property and business owner, said even though the area has strong school districts, he is still concerned when jobs move from the western portion of the county. “The western side has had enough, and we are going to do what we have to do to keep our jobs here,” said Mento.

Annette DeRose of Folsom said she recently purchased a house in Folsom because of the school district. “I hate to see Folsom not be as affordable as it is now,” said DeRose. “With taxes going up, I’m concerned because I don’t know if we can afford to live here anymore.”

Benjamin Ott of Hammonton, president of MainStreet Hammonton and vice president of the Greater Hammonton Chamber of Commerce, sent an email to South Jersey Gas executives explaining to them how their potential move to Atlantic City directly contradicts its mission statement.

The Atlantic County Board of Freeholders is expected to meet at 4 p.m. in Northfield on March 15 at the Stillwater Building to vote on the proposed South Jersey Gas project. However, council may request to move the meeting to a bigger room in order to accommodate a potentially large crowd.