Mayor: Despite vote, will work with county

The coalition between the Hammonton and Folsom’s governments did not get the vote they wanted.

Mayor: Despite vote, will work with county 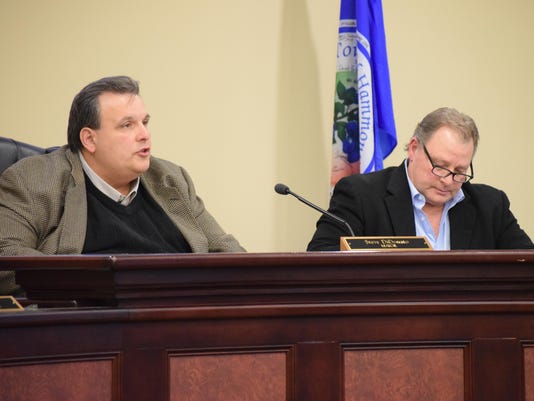 HAMMONTON - The coalition between the Hammonton and Folsom’s governments did not get the vote they wanted at last week’s Atlantic County Board of Freeholders meeting.

Despite opposition from the municipalities in the western part of the county and some of their residents, the freeholders voted to guarantee up to $60 million for the Gateway Project in Atlantic City, which would include South Jersey Gas moving its headquarters from Folsom to the resort town, at a meeting on March 15 in Northfield.

“I guess I was hoping for a last-second miracle,” Hammonton Mayor Steve DiDonato said, “to somehow keep South Jersey Gas in this part of the county because of these jobs and the local stake they have in Hammonton and in Folsom. I was a little disappointed.”

He added: “It’s pretty much a done deal. They are moving to Atlantic City.”

In the weeks leading up to the vote, representatives from Hammonton and Folsom argued the utility’s move is exactly what the county’s own economic development plan argues against. The two councils even came together in an official meeting to oppose the plan and ask for the utility and the county to reverse its decision.

Opponents of the move also felt that taxpayers’ money shouldn’t fund the utility’s relocation. County representatives countered that the funding is for the Stockton University campus and that the utility will be paying for their own move.

When the project is completed, more than 165 jobs will move from Folsom to the new headquarters in the Chelsea section of Atlantic City.

“It’s unfortunate. We are Hammonton and we will find a way to fill those vacancies,” Hammonton Councilman Steve Furgione said. “You never want to see those businesses leave. Folsom is our neighbor and you don’t want to see a good business leave.”

Despite taking on the county in recent weeks, both DiDonato and Furgione believe the town and the county can and will work together in the future without animosity.

“I think it will be fine,” Furgione said. “I am very pleased that John Runfolo (Hammonton Chamber of Commerce) is on the new economic development board. We will have representation. As long as we are heard that’s all we can ask for. We want to make sure our voices will be heard and we want a fair share in our end of the county.”