“Mission: Possible” was the theme this year, drawing focus to the fact the fundraiser makes a culinary education possible for many students. 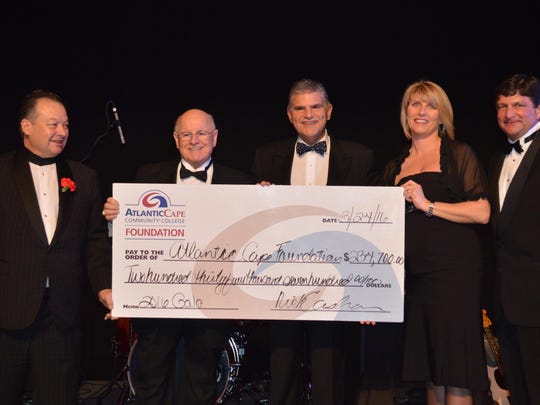 Kyle Timpson of Dennis Township, a student at the Academy of Culinary Arts, worked with graduates Steve Calhuon and Blaise Calamorino, both of Washington Township, to make inspired hors d’oeuvre.

“It’s like a bomb bursting in your mouth,” said Timpson.

The trio applied their scientific and cooking skills to make hors d’oeuvre that popped open in your mouth. It was a tomato served with a balsamic honey reduction, fried basil, olive oil powder and Parmesan crisp. “It’s molecular gastronomy with a twist on a Caprese salad,” said Timpson. 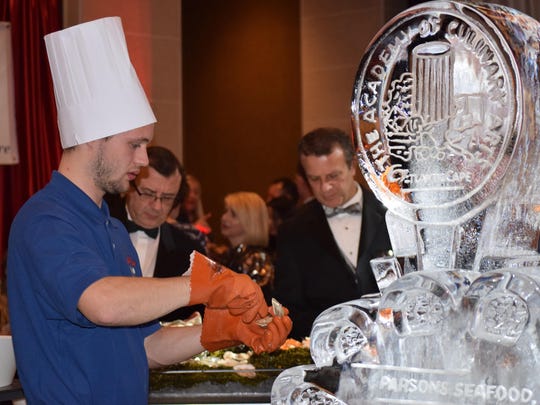 Pete Siner of Mullica Hill, an employee at Atlantic Cape Fisheries, shucks fresh clams during the Atlantic Cape Community College Restaurant Gala. He is standing next to an ice sculpture that was made by students at the Academy of Culinary Arts. (Photo: Photo/Jodi Streahle)

In his third year at the school, Timpson looks forward to the gala every year. “It’s nice because we get to see the public to get their reaction and feedback,” he said.

For Paula Spoltore of Oceanview, who attends the gala annually, the highlight of the night is talking to the student chefs. “I think it’s wonderful. The students are so happy to be doing what they do,” said Spoltore.

Hors d’oeuvres included extravagant spreads of meats, cheeses and vegetables, a cold seafood bar and specialty items such as duck liver mousse and a purple fried rice stir-fry. Inside, a flavorful spread of house specialties displayed the talent of area chefs.

Shawn and Maureen McCloud of Hammonton talk to Kyle Timpson of Dennis Township, a student at the Academy of Culinary Arts, about his hors d’oeuvres that were served during the cocktail reception at the 33rd Annual Atlantic Cape Community College Restaurant Gala that was held March 24 at Harrah's Waterfront Conference Center in Atlantic City. (Photo: Photo/Jodi Streahle)

“We’re looking for anything that is inventive or creative,” added her friend, Elizabeth Ellison of Somers Point.

“What’s not to like? You get to try things from places that you don’t get to visit. It’s an awesome event,” said Maureen McCloud of Hammonton. 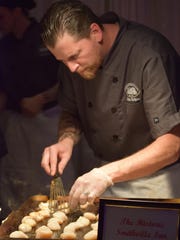 Since 1984, the gala has raised more than $3 million for scholarships at the Academy of Culinary Arts and Atlantic Cape Foundation operations. The Restaurant Gala was held in the Avalon Ballroom of Harrah’s Waterfront Conference Center in Atlantic City.