Hammonton’s Brandon Gazzara gets a hit during a 7-4 victory over GCIT on April 14.(Photo: Kristian Gonyea/Photographer)

Dylan Ruskanen singled three times and knocked in two runs and Anthony Fazio had two hits, including a double, and an RBI. Sean Cocuzza singled twice and also allowed one unearned run in three innings of relief while striking out six.

Triton 4, Hammonton 3 – Restuccio doubled and knocked in three runs in the loss. D’Antonio took the loss, allowing three earned runs while striking out seven in 62/3 innings.

Triton scored a run in the top of the seventh inning to earn the win. 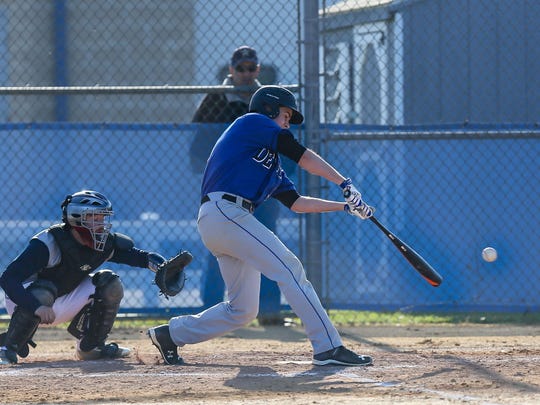 Hammonton 13, Overbrook 3 – Hammonton’s Izick Flores picked up the win and also doubled in the win. Ross Restuccio had three hits, including a double, in the victory.

Hammonton 5, Pennsville 1 – Cocuzza allowed one run on four hits while striking out four as the hosts won their own tournament. Stephen Restuccio had a double and knocked in three of the Blue Devils’ five runs.

Coming up – Hammonton is at Kingsway on April 20 and then home on April 25 against Williamstown.

Hammonton 12, Penns Grove 0 – Miranda Shinn allowed one hit in five innings while striking out six to pick up the win for the Blue Devils.

GCIT 3, Hammonton 1 – Madison Mathes’ single drove in Emmons for the Blue Devils’ only run of the game. Emmons doubled for the team’s only extra base hit. 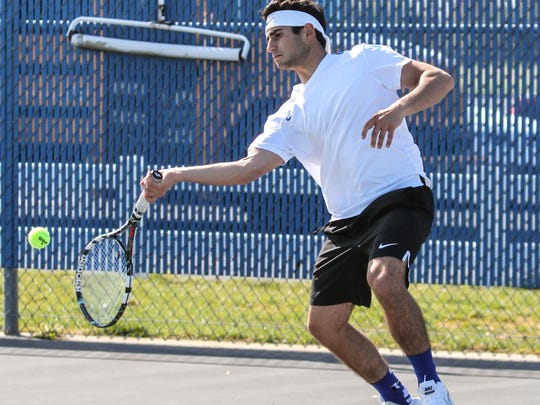 Hammonton’s Vincent Maimone returns a serve during a 5-0 triumph over GCIT on April 14. (Photo: Kristian Gonyea/Photographer)

Hammonton 3, Hightstown 1 – The Blue Devils scored three runs in the top of the seventh inning to advance in the Rancocas Valley Tournament.

Washington Twp. 5, Hammonton 2 – The Blue Devils scored two runs in the fifth inning to take a 2-1 lead, however, Washington Township rallied for four runs in the seventh inning for the win.

Coming up – The Blue Devils host Kingsway on April 20 and the Hammonton Invitational Tournament on April 23-24. Hammonton is at Williamstown on April 25.

Coming up – The Wildcats are at ACIT on April 20 and on the road at OLMA on April 22. St. Joseph plays in the Hammonton Invitational on April 23. They are also at Wildwood Catholic on April 24 before hosting Buena on April 26.

Hammonton’s Jordan Mitchell returns a shot during a 5-0 win over GCIT on April 14. (Photo: Kristian Gonyea/Photographer)

Hammonton 5, Triton 0 – The Blue Devils cruised to a shutout win over Triton, blanking their counterparts at every position.

Coming up – Hammonton is on the road for three straight matches beginning April 20 at Kingsway. They are at Cumberland on April 21 and Pitman on April 22. The Blue Devils are back home on April 25 against Williamstown.

Coming up – Hammonton hosts Highland on April 20 and is at the Bridgeton Invitational on April 23. The Blue Devils are at Clearview on April 25.

Coming up – The Blue Devils are at Highland on April 20 and home against Clearview on April 25.

Schalick 181, Hammonton 191 – Gage Solis shot a team-best 44 for Hammonton in the loss. Both Zach Piro and Chad Syvertson shot a 47.

Williamstown 175, Hammonton 201 – Solis was the only Blue Devil to break 50 in a loss to the Braves.