St. Joseph’s Lauren Rutt bunts during a 6-4 win over Cedar Creek on May 20.(Photo: Kristian Gonyea/Photographer)

St. Joseph 5, Buena 2 – Kyra Berrios had two hits, including a triple, and knocked in a run, as the Wildcats rallied from two runs down to top the Chiefs.

Gianna Morganti, Cara Owsley and Taylor Sirolli all had an RBI and Sara Raubertas added a double in the win. Sirolli picked up the victory, striking out 11 and allowing two earned runs on three hits in seven innings.

St. Joseph 7, Middle Twp. 5 – Sara Raubertas was 3-for-3 with two home runs, a double and three RBIs to lead the Wildcats over the Panthers.

Sirolli, who was the winning pitcher, plated two runs and doubled.

St. Joseph 11, Cape May Tech 0 – Berrios, Owsley and Sirolli all drove in two runs for St. Joseph. Nicole Fox had two hits, including a double, and also registered an RBI.

Gabrielle Fanelli struck out six in 42/3 innings to pick up the win. 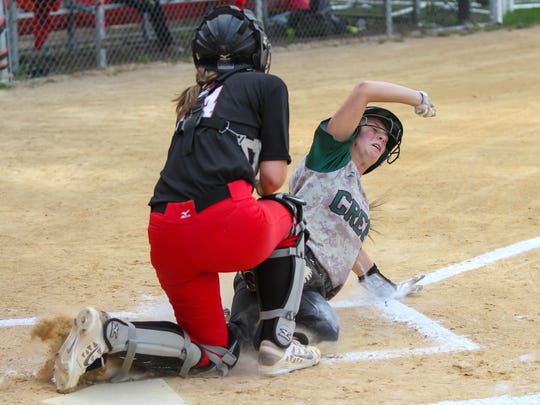 St. Joseph 6, Cedar Creek 4 – Sirolli allowed one earned run on six hits while striking out seven in a complete-game victory.

Owsley had three hits and an RBI and Fox and Sirolli both added two hits. Fox also scored twice and knocked in a run.

St. Joseph 6, Gloucester 5 – Berrios drove in two runs and had two hits as St. Joseph scored in its last at-bat to win its seventh consecutive game.

Sirolli doubled twice and Raubertas singled twice for the Wildcats. Sirolli pitched a complete game for the win.

Coming up – The Wildcats are the No. 5 seed in the Non-Public B South playoffs and are at No. 4 Gill St. Bernard’s on May 26.

St. Joseph 13, Middle Twp. 4 – Salaam Horne had three hits, including the 100th of his career, in the win. The Wildcats’ John Payne added two hits, including double, and Jacob Brennan picked up the victory.

Cape-Atlantic League Championships – St. Joseph’s Devon Martin placed third in the 110-meter hurdles (14.9 seconds) and fourth in the 400 hurdles (57.75) at Bridgeton. Dontae Loveland was fourth in the high jump (5-10).

Coming up – St. Joseph will compete in the Non-Public B South Championships on May 27-28 at Central Regional.