Fundraising efforts to bring a dog park to Hammonton received a major boost from the Beneful 2016 Dream Dog Park Project. 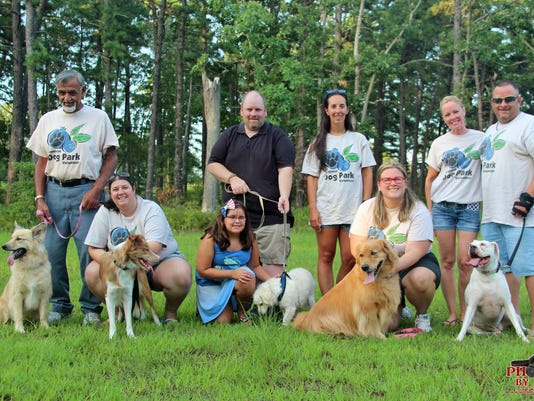 The Hammonton Dog Park Volunteers have been working hard to bring a dog park to Hammonton.(Photo: Photo/Submitted)

The Beneful team recently awarded the Hammonton Dog Park Volunteers with a $2,000 gift and the promise to match donations made to the organization’s GoFundMe account through Sept. 15 up to $5,000.

The money will be used to purchase material for a fence that will enclose the 2-1/2-acre property at the Boyer Avenue fields that will become the town’s first dog park. The estimated cost of the project is $18,000, said Dan Bachalis of the Hammonton Dog Park Volunteers.

“The Beneful matching challenge has really given the whole project a massive shot in the arm and it really has proven the thing that turned the tide on raising the funds to get the fencing,” Bachalis said.

The project has been in the works since 2013, and it could be completed as early as October. The concept formed after a report was completed by the town’s Companion Animal Task Force, and residents expressed the desire for a dog park.

“One of the ideas was creating a network of dog parks in the town so that people no matter where they lived in Hammonton would have access to walk their dogs over and get them some exercise and socialize with other dogs, and the owners could socialize with other residents of the town to stimulate that civic engagement,” said Bachalis.

The vision of a dog park at the Boyer Avenue fields was quickly formed, but it was delayed due to Pinelands Commission regulations for almost two years. It was approved this past spring.

The property features a large fielded area, a small water feature and a line of trees. The dog park will have separate sections for large and small dogs. The fenced area will feature double gates to avoid any dogs escaping while others are entering or exiting the area, said Bachalis.

Hammonton Dog Park Volunteers formed about two years ago to raise funds and help bring the concept into fruition. President Shelley Weckerly reached out to the Beneful Dream Dog Park Project. Once she shared the town’s vision, the park was selected for the challenge.

Another challenge was raising $5,000 in 30 days in order to qualify for the matching funds from Beneful. “I was amazed how quickly we raised it. We had 30 days, but we did in about a week and a half,” said Weckerly.

The Hammonton Dog Park Volunteers GoFundMe page has raised more than $14,000, and their goal was $12,000. Any additional funds raised will be used for supplies at the dog park, such as signs and animal waste disposal supplies.

Weckerly has a golden retriever and a puppy. She has to drive about 20 minutes to get to a dog park where she can exercise her dogs off the leash. “I thought it would be nice to have a place where you could hop in the car and go over for 10-15 minutes and ware them out and then come home instead of them having more time in the car than they actually spend playing,” she said.

“We are going to try to make a fun environment for dogs in the town of Hammonton,” said Weckerly.