The Furry Buddies are for children of all ages to practice their reading skills on a non-judgmental audience.

HAMMONTON - It was all about sharing and reading among friends on Sept. 6 as the Mays Landing Branch of the Atlantic County Library System hosted the Furry Buddies, a group of therapy dogs that children can come and read to.

The Furry Buddies are for children of all ages to practice their reading skills on a non-judgmental audience.

Downs also brought along newcomer Kody, a 4-month-old male English chocolate lab, who Downs is in the process of training to be a diabetic alert dog.

Freedom, Erin and Cavan enjoy coming out and spending time with the children they visit. “He listens to the stories and enjoys the pets,” said Berenotto about Freedom. The dogs do not even mind being swamped by dozens of kids when they are taken to schools.

Downs is no stranger to using service dogs to help with reading. “I have been doing reading programs at my home for 25 years,” said Downs, who is a dog behaviorist. She has found that children are calmer when they pet an animal, especially children with disabilities.

Downs and Berenotto have known each other for years. Downs trained all four of Berenotto’s dogs, including Freedom. Before finding Freedom, Berenotto had been looking for a service dog. One day, she received a call from Downs. “Donna got a hold of me and said I found your dog.” 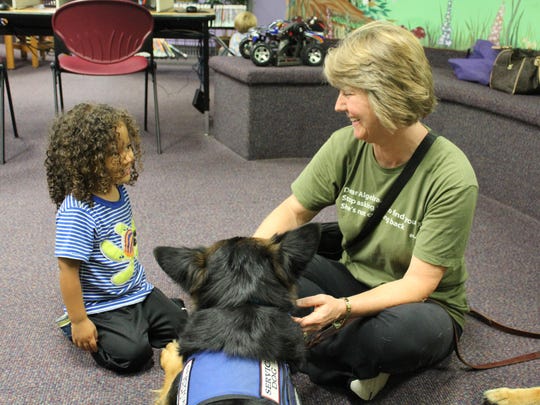 There will be plenty of opportunities to see the Furry Buddies over the next few weeks. They will be back at the Mays Landing Branch of the library system on Sept. 20, Oct. 4 and 18. They also will be at the Galloway Township Branch on Sept. 27 and Oct. 11, all of which start at 6:30 p.m.