Companies work together to pay it forward

When Larry Stiteler heard a sermon at church challenging him to use what is in his hands to serve others, he looked and saw a hammer.

Companies work together to pay it forward 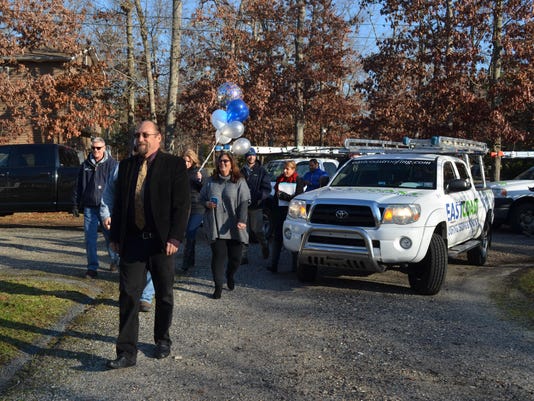 EGG HARBOR TOWNSHIP - When Larry Stiteler heard a sermon at church challenging him to use what is in his hands to serve others, he looked and saw a hammer.

That was more than nine years ago, and every year since Stiteler, the owner of East Coast Roofing, Siding & Windows, has been working with his employees and other local businesses to deliver a free roof giveaway to a lucky winner every Christmas.

“A baker can bake a loaf of bread, a barber can give a haircut, but we can give a roof,” said Stiteler. “That’s what the Lord has put in our hand. That’s what we have to serve the community with.” He said he is motivated by the love of Christ and that is what allows his company to hold the contest annually.

Larry Stiteler, owner of East Coast Roofing, Siding & Windows, surprises Master Sgt. Christopher LeConey of Egg Harbor Township with the news that he won the 9th annual Roof Giveaway on Dec. 14. A new roof will be installed on his house before Christmas. (Photo: Photo/Jodi Streahle)

“We wish we could do more, but we know that everybody can do something. That’s what we are trying to do: reward somebody for what they have done and give a pass it forward type of attitude,” said Stiteler.

“This year’s winner is really special to us because he is military active duty,” said Stiteler. “He is protecting our freedoms.”

LeConey has 23 years of service with the Air Force National Guard and is currently stationed at the 177th Fighter Wing. He is a single father and has been using tarps to protect his three children and his home from the elements. 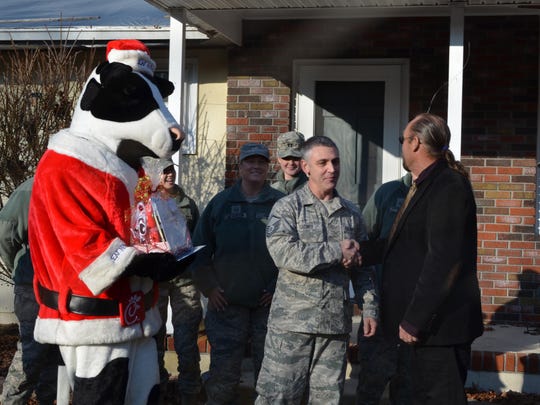 Master Sgt. Christopher LeConey of Egg Harbor Township is surrounded by members of his unit and the cow from Chick-Fil-A as he thanks Larry Stiteler of East Coast Roofing, Siding & Windows. (Photo: Photo/Jodi Streahle)

He will be deployed early in 2017, and knowing that his roof will be repaired before that is a tremendous relief for him.

“His roof is in pretty bad shape. He has tarps covering major leaks, and he was concerned about leaving his family with the situation,” said Stiteler. “This is one less thing he has to worry about when he is over there.”

LeConey was overwhelmed as he watched his front yard fill with all the people who are involved in the project.

“I’ve never had anyone do anything for me,” said LeConey. “I’m not used to this.” 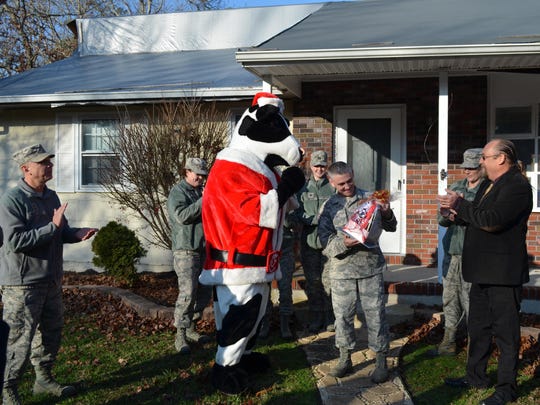 The cow from Chick-Fil-A presented a gift basket to Master Sgt. Christopher LeConey, who won the 9th annual roof giveaway. The contest is organized by East Coast Roofing, Siding & Windows and is completed through partnerships with local businesses. (Photo: Photo/Jodi Streahle)

The Egg Harbor Township Police Department provided a police escort for the caravan of vehicles making their way to the presentation. They hit the sirens as they approached LeConey’s home, and everyone quickly gathered to deliver the good news.

East Coast will complete the roof in time for Christmas. Universal Supply Co. is donating all materials for the roof; Apex Gutters is installing new gutters, and Clean Lines Painting and Powerwashing will complete interior work. Chick-Fil-A also joined the gift-giving effort this year and brought its cow mascot and breakfast for everyone at the surprise presentation.

“We’ve donated gutters for as long as Larry has been doing this. We always want to give back. We are always happy to help,” said Chuck Somers, owner of Apex Gutters.

“Our company loves to give back to the community and what better way than something like this with sharing what we can give and the compassion and love that comes with it,” said Karl Burrows, marketing representative for Chick-Fil-A. 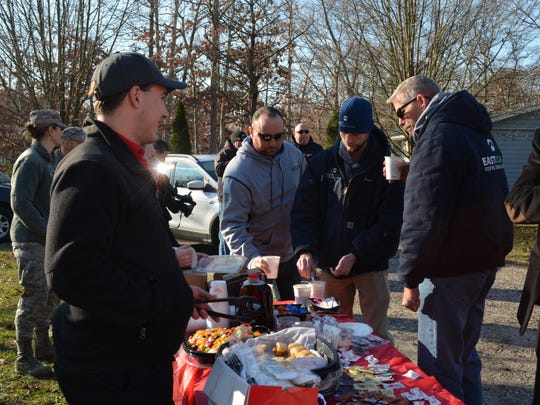 LeConey was nominated for the contest by his co-worker, Chief Diana Samborski. “I’m excited for him. He truly needs and deserves this ... I was so excited when I found out; I felt like I was getting a roof!”

She said the free repairs will give LeConey peace of mind when he is deployed and will allow him to spend valuable time with his children instead of working on his house.