County honors those for serving in spirit of King

This year, the award was presented to Bill and Tammy Schmincke of Egg Harbor Township.

County honors those for serving in spirit of King

ATLANTIC CITY - County and local officials didn’t let anything, not even a bomb scare, distract them from honoring the legacy of Dr. Martin Luther King Jr. and celebrating his message of giving back to the community.

Less than an hour before Atlantic County’s 30th annual Dr. Martin Luther King Jr. commemorative birthday celebration was scheduled to begin Friday, the county office on Atlantic Avenue in Atlantic City was evacuated because of a suspicious package.

By 11:30 a.m., the area was secured and deemed safe to reenter by the New Jersey State Police, and the ceremony began after a half-hour delay. 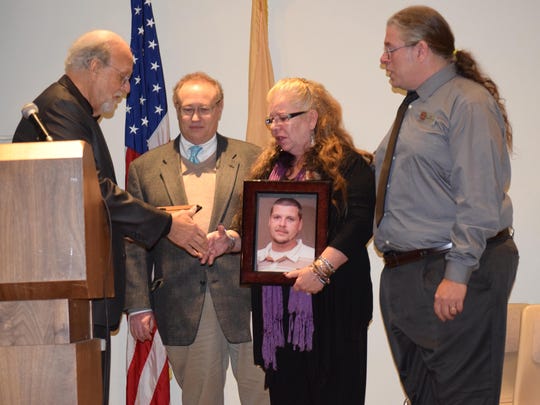 “We usually have the room crowded, but today we had a bomb scare,” said Atlantic County Executive Dennis Levinson. “I guess the people who were coming saw that they couldn’t get in and kept going. But that should not distract from the extraordinary work that these four individuals have done for our community in the spirit of Dr. Martin Luther King.”

The highlight of the celebration is the presentation of the MLK Community Spirit Award that is awarded to individuals who work to make an impact in the community.

This year, the award was presented to Bill and Tammy Schmincke of Egg Harbor Township, founders of the Stop the Heroin organization, and Kelsey and Kimberly Jackson, owners of Kelsey’s Southern Café and Kelsey’s Supper Club in Atlantic City.

“Our honorees are involved. They are involved in our community in different ways to fight for our children in our community,” said the Honorable Mark Sandon, a N.J. Superior Court judge, who served as the guest speaker. “The legacy of Dr. King is to free the oppressed, to free the enslaved. Slavery to a drug is subjugation to a chemical which kills … We all have to be involved in the fight. We are fighting for the lives of our children and for our lives. We are fighting for our communities. Dr. King would have led this fight, I am sure. He is not here, but you are.”

The Jacksons were both raised in Atlantic County and attended Atlantic Cape Community College. They support several organizations including Sister Jean’s Kitchen and the Atlantic City Rescue Mission, as well as providing internships and raising scholarship funds for local culinary students. They were recognized as the Atlantic County Institute of Technology’s Business Partner of the Year.

The Schminckes founded a local organization, Stop the Heroin, after tragically losing their son Steven to a heroin overdose in March 2016. The organization promotes addiction education and awareness and supports people making the transition to drug-free living after rehabilitation. In December, they opened Steven’s House in Pleasantville.

“We have to all understand that the problems that are associated with addiction effect our whole society and we can’t keep doing what we’ve been doing,” said Levinson, pointing out that there were 1,600 drug-related deaths in New Jersey in 2015. “We all know that. We understand it, but what do we do about it? We have some individuals today who are being honored that have done the very best they could in their community to make sure that they at least try the best they can in this little spot on the earth to make it a better place.”

“I think it’s very fitting that we have these two honorees who work on the same problem in different ways,” Shabazz said. “When young people can’t get a job in other venues, Kelsey and Kim’s comes to the rescue. In addition to being an outstanding restaurant where you can get a fabulous meal, they are entrepreneurs who have a social conscience who are dedicated to giving back in the community.”

The Jacksons said it was second nature to them give back and it’s “just what we do.”

Tammy and Bill Schmincke of Egg Harbor Township are pictured during the 2017 MLK Community Spirit Awards presentation at the Atlantic County office building in Atlantic City. The Schminckes founded the Stop the Heroin organization after suffering the loss of their son, Steven, to a heroin overdose. (Photo: Photo/Jodi Streahle)

“We’ve only been doing what I’ve been taught to do and that’s always encouraging other people and giving back to the community,” said Kimberly Jackson. “I believe that what we provide to the community is hope. We provide that hope by giving you a purpose. When you can take a young individual and give them something to look forward to, a skill, something to make them feel good about themselves, that’s hope, and when you have hope, you can look to the future with it.”

Dr. King “changed this country with his heart, passion and action,” said Bill Schmincke. “As an organization we try to make that same impact on our community.”

“I am so honored to even have my name spoken in the same sentence as Dr. Martin Luther King,” said Tammy Schmincke. She congratulated the Jacksons, saying, “Keep up the good work. It’s the little people like us that are going to help others out there who really need us.”