Need a break from it all? Step back to a simpler time, the Reagan era, when rock music had the power to make you forget the world outside. 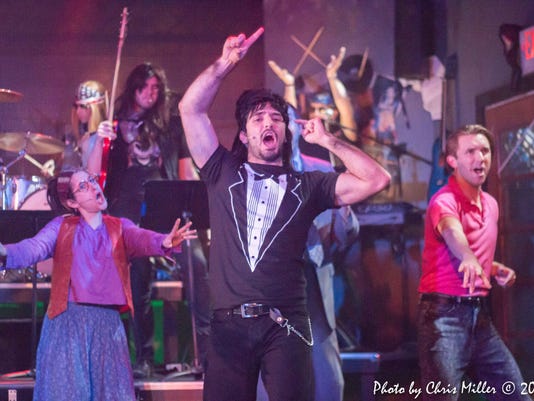 ROCK OF AGES will run through Feb. 19 at the Eagle Theatre in Hammonton. Tickets can be purchased at www.TheEagleTheatre.com or by contacting the box office at (609) 704-5012.(Photo: Provided)

HAMMONTON - Need a break from it all? Step back to a simpler time, the Reagan era, when rock music had the power to make you forget the world outside.

Set in 1987, ROCK OF AGES, running through Feb. 19, is known as the quintessential, riotous, raucous, feel-good-party musical. Featuring explosive anthems such as “Don’t Stop Believin’”, “Wanted Dead or Alive”, “Here I Go Again”, “We’re Not Gonna Take It”, and “Hit Me With Your Best Shot.”

Co-artistic director Ed Corsi states, “Throughout the performance, actors break the fourth wall, directly addressing the audience, reminding patrons that they are also actors in the musical.”

The show’s band, clad in typical metal-head costumes and accoutrements, also breaks theatrical tradition as they share significant stage time with the actors.

Eagle Theatre cast member and choreographer Sal Pavia said, “You don’t have to be a musical theater buff to appreciate every ounce of entertainment ROCK OF AGES has to offer.”

The original Broadway production ran for 2,328 performances, closing on Jan. 18, 2015, placing ROCK OF AGES in a tie with Man of La Mancha as the 27th-longest running show in Broadway history. Since its debut in 2009, it has spawned a plethora of productions worldwide in Japan, Australia and the United Kingdom, as well as several regional and touring productions. In 2012 it was adapted to film, starring Russell Brand, Paul Giamatti, Catherine Zeta-Jones, Alec Baldwin, and Tom Cruise.

However, the real star of ROCK OF AGES is the music itself.

Eagle Theatre cast member Leanne Smith exclaims “Journey, Styx, Foreigner, Bon Jovi ... It is an exciting musical because it’s all songs you know and love, that make you want to get out of your chair and dance or sing.”

Eagle Theatre is located at 208 Vine Street, Hammonton. General admission tickets are $20 to $40. Run time of the production is about 2 hours, 15 minutes (including intermission). Tickets can be purchased at www.TheEagleTheatre.com or by contacting the box office at (609) 704-5012.