This Saturday, Hammonton welcomes a new venue to town — the Kathedral Event Center.

The view from the new stage at the Kathedral Event Center.(Photo: Photo/Hannah Fox)

“We hope to pick up where the town leaves off,” said owner and Hammonton native Kevin Rodio. He said he has been in the entertainment business for years with his company Spellcaster Productions, but he was ready for a change. That was when an opportunity came along that he could not pass up.

The former St. Martin DePorres Church on South Egg Harbor Road had been empty for a few years before an idea began to form in Rodio’s mind after he saw the closed church. He knew it was the perfect place for the kind of event center he had in mind. 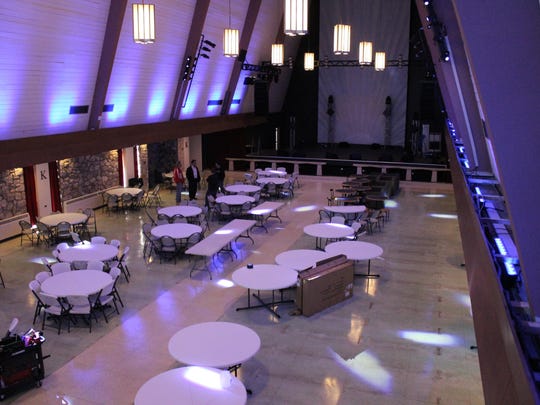 A bird’s-eye view from the VIP section. (Photo: Photo/Hannah Fox)

Once Rodio put in an offer for the former church towards the end of last summer, things moved quickly. Now less than a year later, the Kathedral Event Center is ready to open its doors. He credits the Town Council and the town’s coding and zoning board for supporting him “every step of the way.”

That strong town support was well complemented by a lot of hard work.

While Rodio and his team removed the pews and religious symbols from the building, they restored everything else to its original state from when it was built in 1964, including the original paint colors, stone and bathroom tiles. They even kept the original marble that surrounded the former alter, which is where the stage is now. 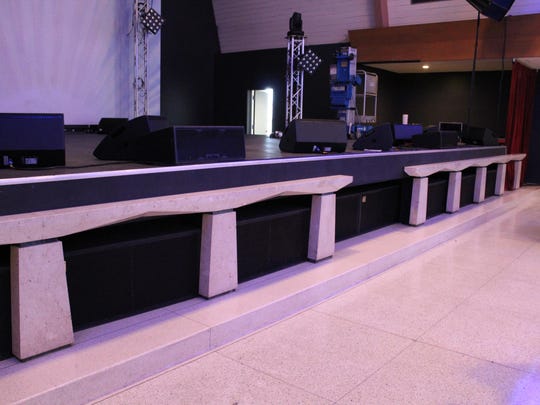 The faithful need not be worried about the use of the building for various events as being sacrilegious. The former church was desanctified, Rodio said, and the original cornerstone removed before work began on the building. Rodio is pleased that all of the hard work is paying off.

“It’s absolutely coming together,” he said.

The Kathedral Event Center will be a place for high-end entertainment and for people to rent out for personal events, such as weddings. The Kathedral will have two areas for rent, the main hall/concert hall in the former sanctuary and the banquet hall downstairs.

“There really is nothing like it. It gives us the flexibility to be whatever we need it to be,” said Kathedral managing director Andrew Rivenbark. 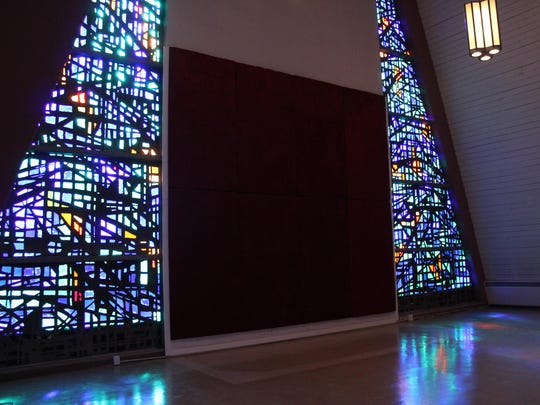 Light pours through the original stain-glass windows in the VIP Section of the Kathedral Event Center. (Photo: Photo/Hannah Fox)

“I think this place can be a regional powerhouse,” Rivenbark said.

Rivenbark believes the Kathedral will give people who may not want to travel to Philadelphia or Atlantic City a place to come and enjoy some entertainment.

According to Rivenbark, they are also working on transforming the former rectory into a hotel, though that is a least 18 months away. However, once the hotel is completed, it will be a place for performers, wedding parties or anyone else to come and stay in.

The Banquet Hall is getting some final touches before opening to the public for events. (Photo: Photo/Hannah Fox)

Another upcoming concert event is Beatlemania Again on April 8. The Kathedral also will be holding a Dinner Series where guests can enjoy a buffet-style dinner along with some music, all included in the price of the ticket. Some of the performers for the Dinner Series will be a Tribute to Neil Diamond featuring Tom Sadge on April 28, and Doug Church: The True Voice of Elvis on June 24.

A new cornerstone was put in the place of the original after it was removed during the desanctifying process of the church. (Photo: Photo/Hannah Fox)

The event center will not just be for adults but teens as well. The Kathedral will be hosting Springlo, a party for ages 16 and up featuring Burnbomb and DJ Aronic as part of their Dance Party Series on April 14. Parents will be welcome to stay while their kids enjoy the party.

“If you come to the Kathedral, you are in for a great experience,” Rivenbark said.

The Kathedral Event Center is located at 499 S. Egg Harbor Road, Hammonton. For more information, visit www.kathedral.com. You can also call (856) 685-6664 or e-mail: info@kathedral.com. The center can also be found on Facebook, Twitter and Pinterest.