The 31st annual Red, White and Blueberry Festival burst into town on Sunday with people of all ages enjoying everything blueberry.

Angelo Scattrito, 99, (center) a World War II veteran, is honored during the opening ceremonies at the 31st annual Red, White and Blueberry Festival on Sunday. Scattrito is the recipient of several medals for his bravery during the war.(Photo: Photo/Hannah Fox)

HAMMONTON - The 31st annual Red, White and Blueberry Festival burst into town on Sunday with people of all ages enjoying everything blueberry.

“It’s going just fantastic, everyone responded fantastic and couldn’t ask for a better weather report,” said John Runfolo, executive director of the Greater Hammonton Chamber of Commerce. The chamber held the festival in conjunction with AMI/AtlantiCare. Runfolo was especially grateful to everyone who took part in the event. “I thank all the committee members, the sponsors and the town.”

“The weather is perfect and it’s one of the largest crowds in a while,” said Carl Powell, president of the Greater Hammonton Chamber of Commerce. Powell also was thrilled with this year’s blueberry crop. 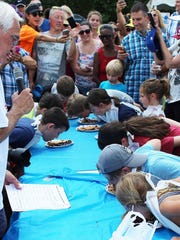 Participants give it their all during the pie eating contest. (Photo: Photo/Hannah Fox)

“The blueberry crop is excellent.” For Powell, the festival is not just another chamber event; he genuinely enjoys everything about it.

“It’s a little bit of everything, it’s just a great event, a nice mix.”

That great mix Powell spoke of included live entertainment from DJ Nicky G from WAYV-FM, WOGL-FM and South Jersey cover band Stealing Savanah. There was a variety of crafters who brought items such as jewelry, soap and even dog collars. There also were kiddie rides and a classic car show that brought in hundreds of vintage cars. 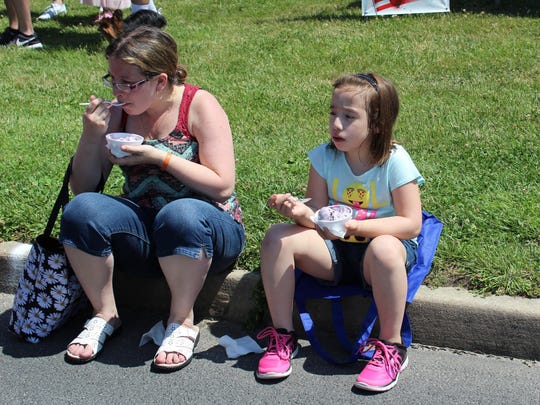 Justina Winkels (left) and her daughter Isabella, 8, take a break from the festival to enjoy some blueberry ice cream. (Photo: Photo/Hannah Fox)

However, the star of the event was blueberries and many food vendors included the prized fruit into their foods. Visitors could get everything from blueberry cannoli to blueberry ice cream; there was even blueberry lemonade. And no event would be complete without some baked goods, so festival goers could pick up some blueberry pies, muffins and breads. And to top off those baked treats, there was some blueberry jam. The Kiwanis Club of Hammonton also held a blueberry pancake breakfast earlier in the day.

Those blueberry pies were put to good use during the pie eating contest.

Participant Tiffany Paretti, 11, was ready to take on the challenge.

“Last year, I actually missed it and I have been waiting a whole year.”

She said she had been studying for the event by watching eating contest videos on YouTube to learn some tricks of the trade. There was one trick in particular that she was looking forward to trying. 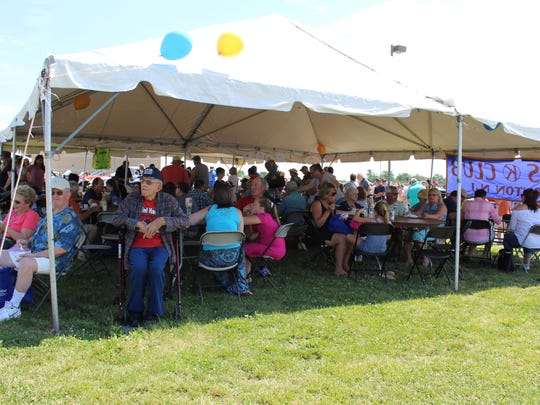 The Kiwanis Club of Hammonton held a pancake breakfast during the early part of the festival on Sunday. (Photo: Photo/Hannah Fox)

“I’m going to breathe through the side so I don’t waste energy by lifting my head up,” she said.

She also made sure she had an appetite by only eating a little at breakfast. In the end, Paretti did not win the contest, but she and all of the other participants walked away with some free blueberries.