It was an evening filled with laughter and tears as Hammonton High School held its 121st commencement ceremony. 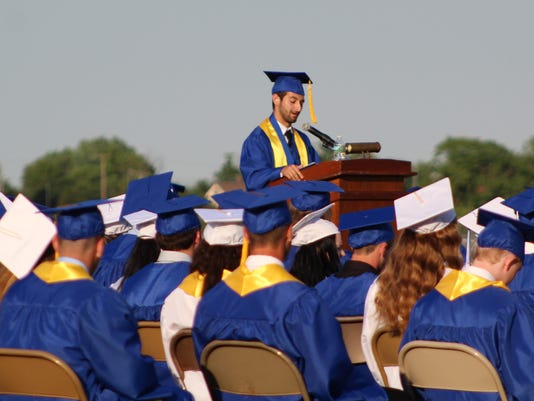 HAMMONTON - It was an evening filled with laughter and tears as Hammonton High School held its 121st commencement ceremony June 20 at Robert Capoferri Athletic Complex.

“I am more nervous than excited. It’s a step into life I haven’t experienced,” said Tadeusz Wardencki IV, 18, before the ceremony.

Wardencki is not exactly sure what his future holds, but he hopes it will include something to do with the music industry because that is his favorite thing. However, there is plenty he will miss about Hammonton High School, particularly the people.

“I will miss being with the majority of my friends and discussions with my teachers,” he said. Yet, Wardencki was confident that the 2017 class will not be forgetton. “The last of the ’90s babies will live on!”

Before the ceremony, Geanna Serechia, 18, also was experiencing a variety of emotions.

“It’s bittersweet, I have mixed emotions about it,” she said. “It’s a big chapter ending, but I’m excited for the new one.”

That new chapter will include attending Post University in Connecticut, where Serechia received a scholarship. She will be majoring in criminal justice as she ultimately wants to become a lawyer. It appears that Serechia will look back on her years at Hammonton High School fondly, especially her years on the softball team where she mostly played first base, but played catcher during her senior year. 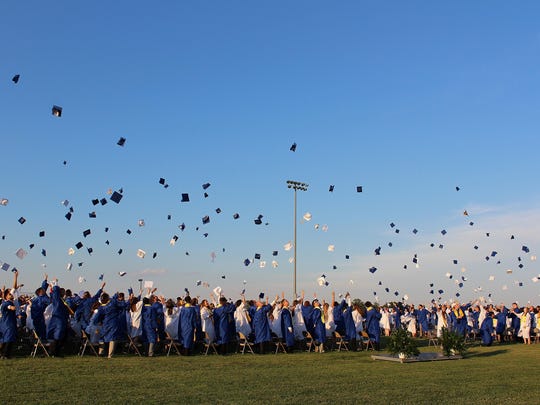 Hammonton High School’s Class of 2017 toss their caps into the air after turning their tassels on June 20. (Photo: Photo/Hannah Fox)

“We are all really hard workers ... and we all clean up really nice,” she said with a laugh.

As the graduates walked across the field and took their seats, they were met by the cheers and clapping of loved ones. It was a moment that all of the graduates had been working towards for years, a fact that was recognized in all of the speeches given during the ceremony.

“I know we are ready to take the next step in our lives,” said salutatorian Ashley Ranere during her speech, which she dedicated to her grandfather who had passed away earlier this year.

Hammonton High School Principal Thomas Ramsay spoke fondly of the 2017 graduating class during his preamble. Ramsay recalled the progress the students had made and that they were an “exceptional group not content with the status quo.”

Ramsay was followed by retiring Superintendent Dr. C. Dan Blachford, who spoke about his hope that the graduates would always look for the good in themselves and in others.

The last speech of the ceremony belonged to valedictorian Paul Pullia.

“If I only had four years to live, I would want to spend them at Hammonton High School ... because they were the longest four years of my life,” said Pullia as graduates, parents and even faculty hardily laughed.

Pullia’s speech was not all lighthearted, however.

He admitted that his years at Hammonton High School were not always easy, but it was there that he found himself and what he truly wanted to be.

With the last speech, graduates were called up one by one to receive their diplomas. Then, the graduates turned their tassels to officially became alumni of Hammonton High School. With a joyous burst of excitement, the graduates threw their caps into the air with a shout as they looked forward to the future.