Say no and stop to bullying.

Author Erin Frankel reads from one of the books in her “Weird!” series to a group of children at the Mays Landing Branch of the Atlantic County Library System on Friday morning.(Photo: Hannah Fox/photo)

MAYS LANDING - Say no and stop to bullying.

That was the message at the Mays Landing Branch of the Atlantic County Library System on Friday morning when author Erin Frankel did a presentation on her anti-bullying books.

Frankel, a Mays Landing native, is the author of the “Weird!” series, which are three books she wrote after hearing stories about bullying on the news and from her daughters’ experiences at school.

“I feel it will empower them in that moment,” said Frankel about what she hopes children will gain from her books.

“It’s important not to label,” said Frankel when discussing why she decided to tell part of the story from the bully’s perspective. “Kids are still learning how to handle their emotions. Just because they do something bad one day doesn’t mean they have to do it the next day.” 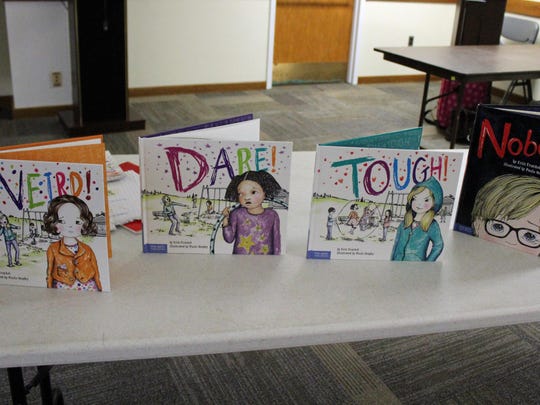 Erin Frankel’s the “Weird!” series of books and the standalone book “Nobody!” (Photo: Hannah Fox/photo)

Frankel’s books dive into the many emotions that those being bullied experience. Frankel knows these feelings well as she herself was bullied when she was in school. In the end though, Luisa learns to love herself for who she is, while Jayla and Sam also learn some very important lessons along the way.

“We have had great feedback,” said Frankel. The feedback has been so positive that the books are in the process of being turned into a musical. The musical will be performed in schools as a way to raise more awareness about bullying.

Along with the “Weird!” series, Frankel has a standalone book called “Nobody!”, which is told from the perspective of a boy who is being bullied. All of Frankel’s books are available wherever books are sold.