The Halloween festivities were in full swing on Saturday afternoon as people enjoyed Hammonton’s Downtown Trick or Treat. 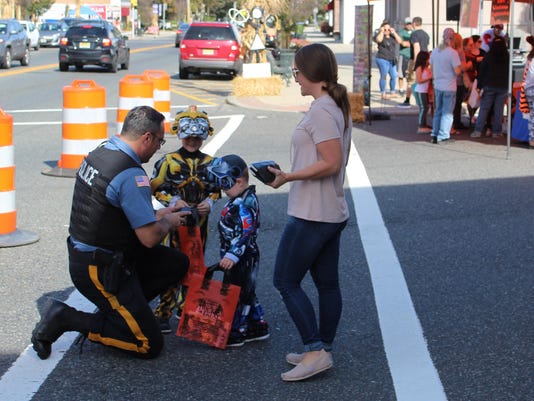 Police Lt. Kevin Friel bends down to talk to Gavin Zbikowski, 5, (left) and his brother Lucas, 3, during Saturday’s Downtown Trick or Treat. The brothers were dressed as Bumblebee and Optimus Prime, respectively, from the Transformers.(Photo: Hannah Fox/photo)

HAMMONTON - The Halloween festivities were in full swing on Saturday afternoon as people enjoyed Hammonton’s Downtown Trick or Treat.

Children of all ages dressed as their favorite characters, heroes and princesses — and in one case a dinosaur — to enjoy all there was to offer.

The tricks and treats got under way along Bellevue Avenue, where businesses opened their doors to offer sweet Halloween goodies. The first stop for many though was at the corner of Bellevue and Central Avenues, where people were able to sign up for a scavenger hunt, paint a pumpkin, or take some pictures in front of some fall- and Halloween-inspired backgrounds.

It was not just businesses that were handing out candy on Saturday, though. Other organizations from all over Hammonton also set up tables to hand out the sweet goodies. 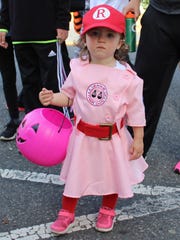 Lillian Domzalski, 2, is dressed up liked a Rockford Peach baseball player such as in the movie “A League of Their Own.” (Photo: Hannah Fox/photo)

“We are trying to get as much involved in the town as we can so people know we are here,” said Lisa Margerum as she helped set up the table for Boy Scout Troop 58 of Hammonton so they could hand out candy. “A lot of people don’t know we are here,” said Margerum’s son, Trey. He said he enjoys being a Boy Scout, but there is one thing in particular that he likes the most. “Camping, camping and more camping,” laughed Trey.

The First United Methodist Church of Hammonton also was out for the event.

However, instead of candy, church members were handing out refreshing juice boxes, a much-needed refreshment on the warmer than average October day.

“We have been doing it since the first year,” said Michelle Perone of the United Methodist Church. “We wanted to spread the good news,” Perone continued.

Kylee Macri, 12, and her friends decided to participate in the scavenger hunt.

“We dance at the dance studio and we usually go to Casciano’s,” Kylee said, but we decided to do this instead.” 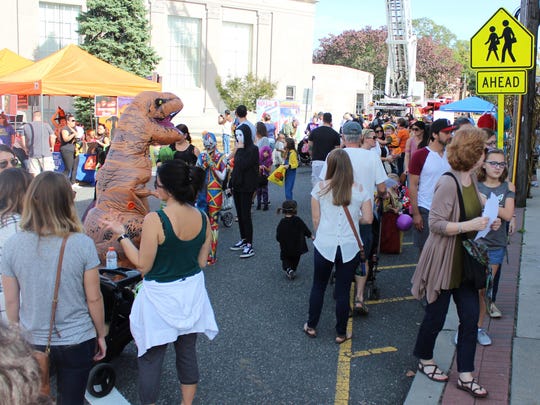 The corner of Bellevue and Central Avenues was packed on Saturday afternoon for all the Halloween fun. (Photo: Hannah Fox/photo)

Kylee and her friends, Katrina Applegate, 11, Ethan Gale, 13, and Alyssa Weber, 16, are all dancers at Paul Morris’s DanceXplosion studio and were on a break when they decided to try their luck on the scavenger hunt.

The Halloween fun has just begun in Hammonton. 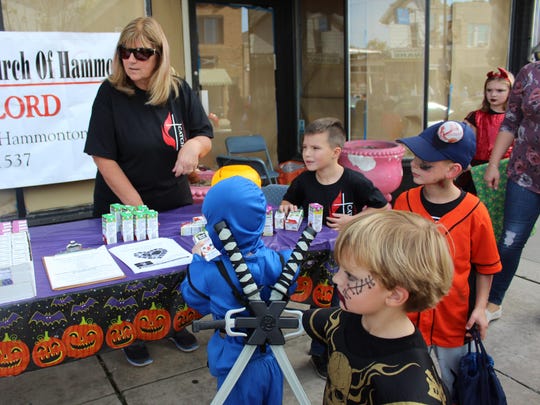 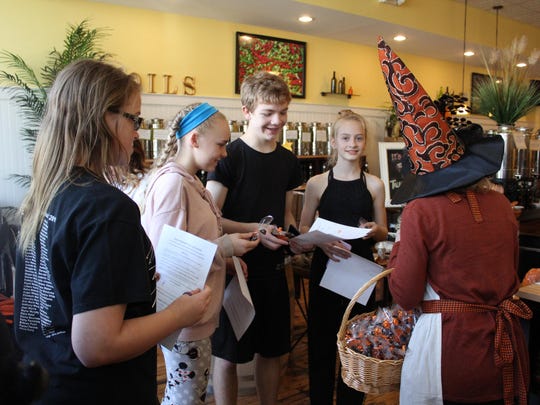 Alyssa Weber, 16, Kylee Macri, 12, Ethan Gale, 13, and Katrina Applegate, 11, get some treats from Kelly Brown, owner of Tales of the Olive, after the group stopped in during their scavenger hunt. (Photo: Hannah Fox/photo)