Stockton University Kramer Hall continued to focus on the “Lure of South Jersey” on Oct. 25. 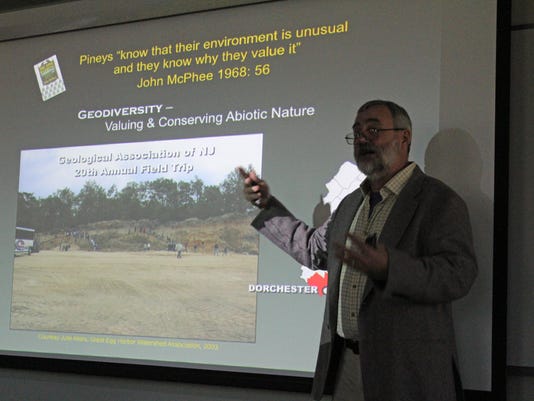 HAMMONTON - Stockton University Kramer Hall continued to focus on the “Lure of South Jersey” on Oct. 25 with the second part of a two-part lecture on immigration in South Jersey.

“This is not any one’s history, it is everyone’s history,” said Mark Demitroff, Stockton University adjunct professor of geography and board member of the South Jersey Culture & History Center.

However, with his background in geography, Demitroff first began the lecture on the geography of South Jersey.

“You’re changed once you understand how unique the landscape is here,” said Demitroff. South Jersey owes much of that uniqueness to the Ice Age and the polar desert that existed in the region more than two million years ago. In fact, the sugar sand that is a staple in South Jersey and the Pine Barrens comes from this Ice Age geographical feature.

The German immigrants to South Jersey would come to leave their mark on the area through a variety of ways. Just one of the many ways was through the name of Hammonton’s very own Bellevue Avenue. Bellevue was the name of a palace in Prussia.

The next group to arrive in South Jersey were the Italians, who arrived in the mid- to late 1800s. Italian immigrants were viewed as an asset because they “knew how to manage small farm plots,” said Demitroff. Many of the Italians who settled in Hammonton came from southern Italy, mainly because many northern Italians were settling in Vineland.

The final group that Demitroff discussed was Russian (Ukrainian) Jews, who first began immigrating to South Jersey after the anti-Jews pogroms in Russia. The first Jewish settlement in South Jersey was at Alliance, with dozens of others following in short order, including Estell Manor. According to Demitroff, many Jewish immigrants took up farming as a part of a belief that one could cleanse the soul through agriculture.

The history of immigration to South Jersey is deep and rich and Demitroff admitted that these three groups were by no means the only ethnic groups to settle in South Jersey, but that time constraints only allowed him to starch the surface of South Jersey’s ethnic history.

Kramer Hall will continue to explore “The Lure of South Jersey: The Resettlement of Migrants” with several upcoming events. On Nov. 4, people are invited to share a brief history of their families. For more information, please visit www.stockton.edu/hammonton.