Magic filled the air at Books-A-Million stores across the country, including the Mays Landing location.

Competition was fierce during the trivia portion of the day.(Photo: Hannah Fox/photo)

MAYS LANDING - Magic filled the air at Books-A-Million stores across the country, including the Mays Landing location, on Saturday for an afternoon of everything Harry Potter.

In the United Kingdom, Harry Potter Book Nights are a bit of a tradition. However, Books-A-Million’s nationwide event on the weekend marked the first-time the tradition had occurred on this side of the Atlantic where celebrations have tended to focus on the release of a new book.

During Saturday’s Harry Potter Book event at the Mays Landing Books-A-Million, fans were welcome to come dressed in their Hogwarts robes and armed with their wands. Fans had the chance to experience several fun activities centering around Harry Potter such as trivia, where competition was fierce, and creating their own magical beast.

“We are doing it all today,” said David Hunt, co-manager of the Mays Landing Books-A-Million. 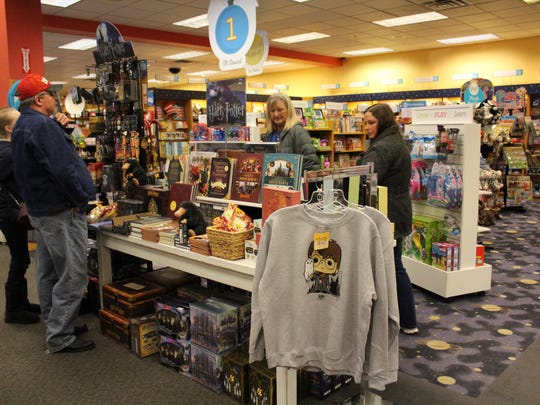 Before the activities started, each fan was given their own Harry Potter 20 Years of Magic Passport, which was stamped at each activity station. Fans have the chance bring their passports back to two more Books-A-Million events honoring Harry Potter. Fans can celebrate “20 Years of Magic” on July 28 and “Christmas in the Wizarding World” on Nov. 10. Once their passports are completely stamped, fans will get a free poster.

Yet, for many fans at the end of the day Harry Potter is about much more than games and trivia, it is about deep and meaningful life lessons.

“The wonderful imagination and all of the wonderful lessons, such as teamwork and kindness,” said Stephanie Grayson about why the Harry Potter series is so important to her.

Grayson, who has been a fan of the series since it first came out, has passed on her love of the series to her children. Grayson’s daughter, Hannah, 8, is particularly drawn to the character of Hermione, one of Harry Potter’s best friends. When asked why, Hannah said it was “because she is a girl and does all these cool tricks.”