Atlantic County Executive Dennis Levinson delivers the State of The County on Jan. 16. 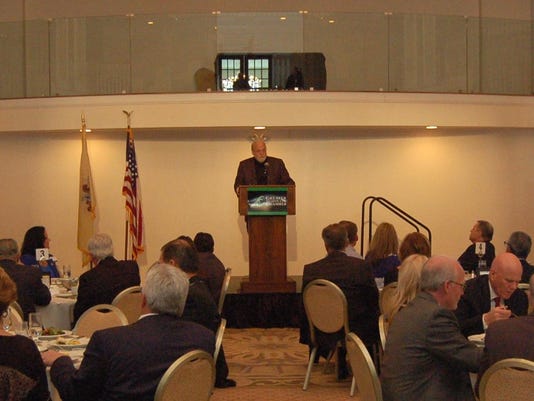 As we begin 2018 Atlantic County remains in excellent financial shape. We are off to a good start and appear to have turned the corner on the economic challenges that have confronted our area.

As a testament to the county’s strong financial position, Moody’s maintained our Aa2 bond rating and even upgraded our outlook. In doing so they noted our strong financial management, long-term capital and financial plans and budget surpluses. Likewise, S&P reaffirmed the county’s AA bond rating and also upgraded our outlook. Both agencies cited our efforts to broaden and diversify the economy as factors in their decisions.

The PILOT made our budgeting process much more complicated since we don’t know what we will receive in total tax revenues from the city that has the county’s largest ratable base. We are the only county in the state in this position. When the state legislature passed the PILOT legislation it failed to clearly specify what Atlantic County’s share would be even though the sponsor’s statement had 13.5 percent included.

A 13.5 percent share of the PILOT payment was agreed to by former Mayor Don Guardian, and promised by Gov. Chris Christie. The Mayor’s Association based their support for the PILOT on this understanding. You can go to our county website, www.aclink.org, and view a video clip we posted and judge for yourself whether the governor reneged on his commitment.

As a result, the county had no alternative but to challenge the constitutionality of the PILOT in court. We believe our case is strong and that we will prevail.

Even though we believe the PILOT is seriously flawed, the county was willing to accept the PILOT if we were guaranteed the agreed upon 13.5 percent share. This amount would assure stability from year to year. This year it is 10.4 percent, which translated into dollars is a difference of $4,000,000. We have no idea what subsequent years will be. The 13.5 percent would also compensate for removing $3 billion worth of casino properties from the county ratable base. Although the casinos paid approximately $100,000 more as a result of the PILOT, we were paid $5 million less because of $3 billion removed from our tax base, almost 10 percent of our value.

On a more positive note, our conservative fiscal policies have enabled us to support critical economic development initiatives. During the good times, we maintained one of the lowest debt ratios in the state. We pay our pension obligations. We don’t have a bloated workforce. We don’t have a structural budget deficit. Therefore, we are able to put our debt capacity to good use by supporting economic development projects that are critical to getting the economy back on track.

Construction of the $210 million Atlantic City Gateway project is well under way and is targeted for completion this September. It includes a new Stockton University campus and South Jersey Gas Co. Headquarters. The Stockton portion of the project was funded by a $127 million bond issued by our Improvement Authority.

The county also helped finance the first building of the Aviation Research and Technology Park. The aviation sector offers Atlantic County the most immediate opportunity for growth. Our Atlantic County Economic Strategy cites aviation as the sector that offered the most immediate benefits. You should feel good to know that this plan is working and is not sitting on a shelf somewhere gathering dust.

The county, along with ACEA and the SJTA, is leading an effort to drive development in an “aviation district” centered on our international airport. The district includes the FAA Tech Center and the Aviation Research Park and an area one mile from the outermost boundaries of the airport. Having this “aviation district” will be of great benefit to our future development.

A priority project currently under way in its early stages is an air cargo operation. There is also a concerted effort to develop aircraft maintenance and repair operations under way at the airport. The airport is an ideal location for these types of operations. Their economic impact will spill over to the surrounding area. They both require a steady stream of skilled workers. That is why we along with Atlantic Cape Community College are working to develop an aviation training academy for aircraft maintenance and repair workers. The academy will be only one component of a comprehensive workforce and development initiative we plan to undertake this year.

We’ve laid the foundation for a vibrant economy in Atlantic County. An economy that is regional, diverse and sustainable. We are now on our way. We have identified clear and obtainable opportunities. We have a vision of what we want to be and implemented a strategy to achieve it. We have committed resources. We know achieving our goals will take time, but we will achieve them. Atlantic County is on the right path and I assure you that by all of us working together — government, business and private citizens — we will enjoy greater prosperity in the years ahead.

Atlantic County is where business and government are working closely to achieve common goals. Our frugality is paying off which allows us to spearhead our economy. We’ve kept our debt low (1/2 of 1 percent of our equalized value), which allows us the ability to invest without mortgaging our children’s future.