Local children riveted while watching ‘I Have a Dream’

Local children riveted while watching ‘I Have a Dream’ 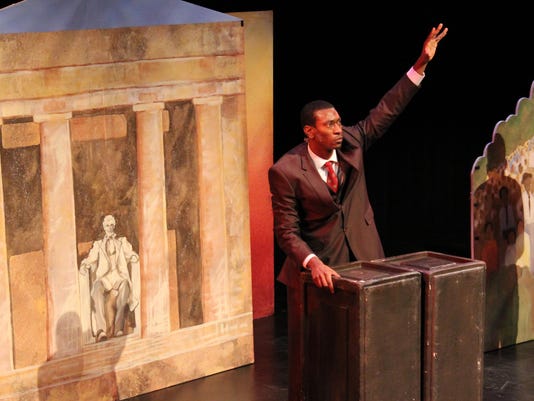 Vaughn Meccod, as Dr. Martin Luther King Jr., raises his arm high during the “I Have A Dream” speech.(Photo: Hannah Fox)

GALLOWAY - On Friday morning, Stockton University’s Performing Arts Center hosted the Virginia Repertory Theatre as it performed its educational play “I Have a Dream: The Life and Times of Dr. Martin Luther King, Jr.”

Stockton University hosted the play as a part of its free series throughout the year for homeschooled children and school groups.

“It’s wonderful to have them,” said Suzé DiPietro, manager of Stockton’s Performing Arts Center about the Virginia Repertory Theatre coming to perform at the PAC.

DiPietro is passionate not only about the arts, but also making the theater a place children want to come to.

“We need to have the arts accessible to children,” said DiPietro. “We don’t want them to think that the theater is only for old people.”

The Virginia Repertory Theatre, which has several traveling groups, was thrilled to perform “I Have A Dream” at Stockton. The play takes on even more meaning during Black History Month and in light of current events.

“I think that this show, especially at this point in our world, it’s an important show,” said actor Mitchell Cole who played several characters in “I Have a Dream,” including Bull Connor, the commissioner of Public Safety for the city of Birmingham, Alabama, who supported violent means — such as using high pressure fire hoses — to stop peaceful protests during the Civil Rights Movement. 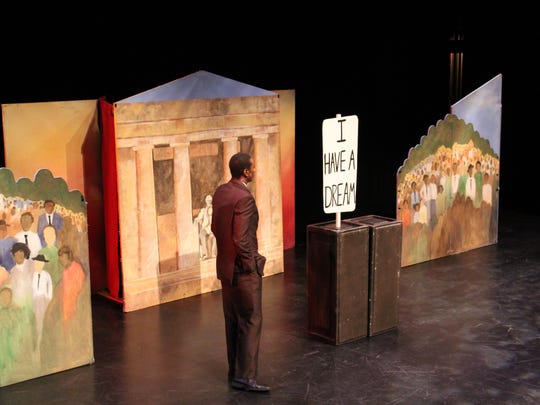 “We have four or five shows that are marketed for Black History Month,” said actor PJ Freebourn. Along with a play on King, the company also has plays on Harriet Tubman and Sojourner Truth.

Like Cole, Freebourn and most of the other actors in the play perform several roles. There is one exception, however. Vaughn Meccod plays only one character, Dr. King. Meccod did not take the responsibility of playing such an important historical figure lightly. He read books and visited Atlanta, Georgia — King’s birthplace — to gain a deeper understanding of King’s life. He then spent two weeks working on memorizing the “I Have a Dream,” speech.

The actors performed to a nearly packed theater. School children of almost all ages sat riveted during the hour-long play that covered all of King’s life. When the play came to an end, the actors received a loud and enthusiastic round of applause.