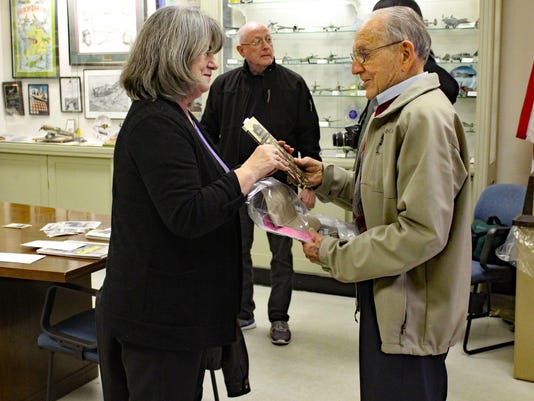 George Washington Whitehouse (right) is presented with a copy of the Arcadia book on the history of Millville.(Photo: Hannah Fox)

Whitehouse, who turned 98 on Thursday, was stationed at the Millville Army Air Field for about 15 months during the war.

“He talked a lot about being here,” said Whitehouse’s daughter, Lynn Birney, who said her father was named after George Washington because he was born on the first president’s birthday. “My grandmother insisted,” laughed Birney.

While well aware of his stories from Millville, Birney and her three brothers did not really know were in the state Millville was having never lived in the area.

However, Whitehouse’s eldest son, George, eventually found where the city was located and visited the museum. After the visit, George knew he had to bring his father to Millville and the museum.

With the help of all four of his children, Whitehouse made the trip rom his home in Emmaus, Pennsylvania, and revisited the airfield decades after he served there.

“I thought it was great,” said Whitehouse about how he felt when his children brought up the idea of visiting the airfield.

Not only was the visit a chance for Whitehouse to see the museum, it also served as the perfect setting to record his wartime experiences for the Veterans Interview Project for the Library of Congress.

The interview was conducted and filmed with the help of Rowan University graduate Rachel Corma and several Millville Memorial High School students.

The interviewers began by asking Whitehouse where he was when he first heard about the attack on Pearl Harbor, the catalyst for the United States entering World War II.

“I was at a cookout at Chestnut Grove Park ... It was real sad because one of the girls in the company just had a brother sign up,” recalled Whitehouse, who was working at Bethlehem Steel Corporation in Lackawanna, New York, at the time. He remembered the general air of uncertainty that many felt after the surprise attack by Japanese naval forces.

“I think we wondered what was going to happen,” he said.

After Pearl Harbor, Whitehouse signed up for the draft but was deferred for a year due to his job at the steel company. However, as more and more of his friends signed up, he decided to join the Army Air Forces as his deferment came to an end. For Whitehouse, it was an easy decision because “I was interested in flying to begin with,” he said with a smile.

Once Whitehouse enlisted, he was sent to Atlantic City for basic training. During his training, he and his fellow recruits stayed at hotels in the city and practiced drills on the boardwalk. The basic training had its perks.

“I had the privilege of hearing Glenn Miller [live] at our dinners,” he said.

After basic training, Staff Sgt. Whitehouse was eventually stationed in Millville, where he was a flight engineer on a brand-new B-26, which was used to tow targets. The B-26 would tow a massive mesh target behind the plane, which P-47 fighter pilots used to practice their gunnery skills. In order to tell who had hit the target, each pilot used different colored painted bullets. The Millville Army Air Field Museum has one of the few remaining tow targets in existence hanging up in the museum — with color bullet holes and all.

Tow target practice had its own dangers, a fact that Whitehouse remembered well.

“All of a sudden there was a whoosh and the bomb bays were open,” recalled Whitehouse about one particular event. Somehow the bomb bay doors had accidentally opened — with one of Whitehouse’s fellow crew members hanging on for dear life and without a parachute. Whitehouse managed to find a parachute and, using one hand, put it on his fellow crew member as the wind tried its best to suck them both out to their deaths.

“I did not think, I just did it,” said Whitehouse about risking his own life to save another.

In honor of his wartime service at the airfield, Whitehouse was given a lifelong membership at the museum and his name plaque on the wall of veterans who have visited the museum.

The Millville Army Air Field Museum is open 10 a.m. to 4 p.m. Tuesday through Sunday. It is located at 1 Leddon Street. Its website is http://www.p47millville.org/.