From orange potatoes to hot dog gravy: The weirdest foods on our holiday tables

Not every holiday surprise is a good one. We asked our readers to share the weirdest dishes they've ever seen show up at the Christmas family feast

From orange potatoes to hot dog gravy: The weirdest foods on our holiday tables

From Twinkies to burgers, stuffing can get pretty weird. 10Best.com

Unlike Thanksgiving, when the table nearly always includes turkey, mashed potatoes, stuffing and predictable sides — or Easter, when a ham typically takes center stage —Christmas is up for grabs.

Some families have a Thanksgiving do-over, while others love a roast, a Christmas ham, or something else entirely.

Depending on where you live, baked ziti or lasagna, pierogi or kielbasa or other ethnic favorites could sidle up to each other on the same holiday table. In some houses, it wouldn't be Christmas without them.

But that doesn’t mean anything goes.

More: Eat your Christmas tree? That is so Jersey

I recall a childhood Christmas when my grandmother, an excellent Polish cook, found a recipe from a women’s magazine for a frozen holiday dessert with ingredients including lots of red Jell-O, mayonnaise and a jar of maraschino cherries.

Hey, I know it was made with love ... and at least there were cookies — and tons of her homemade pierogi.

What were we thinking? 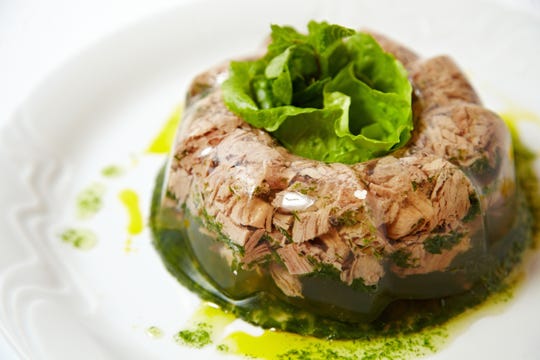 The 1960s and '70s was a time for putting Jell-O just about anywhere. (Photo: kudryavtsev, Getty Images/iStockphoto)

The 1960s and ‘70s was a time that celebrated convenience foods in unusual combinations, and Jell-O where no Jell-O should ever be.

A Huffington Post story last month gathered Tweets featuring the weirdest side dishes that have appeared on Thanksgiving tables. The tweets were filled with nods to mid-century "favorites'' such as pickles, cream cheese, Jell-O, Ritz Crackers, deviled ham, canned pears and tomato soup.

But that anomaly in American cooking provides no cover for my ‘90s-era boyfriend who once tried to serve me mac ‘n’ cheese with trail mix stirred in. Um, hard pass, thanks. (We ordered Thai takeout.)

We asked readers to share memories of their own Christmases past and the holiday dishes that still haunt them worse than Scrooge's "undigested bit of beef, a blot of mustard, a crumb of cheese, a fragment of underdone potato.'' 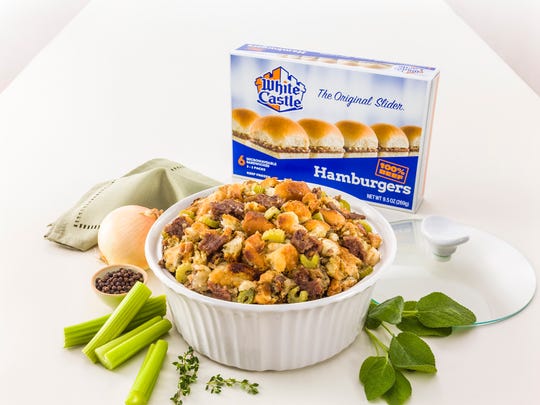 Craving a slider? How about a little stuffing on the side of that bird, featuring White Castle? (Photo: Coe Photo- Peter J Coe/White Castle)

White Castle is either adored or reviled. Much depends on your early exposure to the mini burgers that started the slider craze.

But one thing’s for sure, Arlene Veal of Oceanport, New Jersey, isn’t sure she wants to see evidence of White Castle on her holiday table.

“Recently, my ShopRite had a small pamphlet advertising their new product lines,’’ she writes in an email. “In it was a recipe for stuffing made with White Castle hamburgers (minus the pickles)!!! Do not know anyone who has tried it, but if anyone were to bring it to MY holiday table it would certainly be the weirdest food on the table!’’

Well, Arlene we have the recipe for you right here, should you ever get curious enough to try it.

You can’t contain the weirdness

“This did not happen at Christmas, but it is really weird,’’ she writes. “My mother, after burning the tomato sauce for pasta twice, decided to make her own. She took the leftover coffee from the Mr. Coffee maker (yes it was the '70s) to use as the sauce and decided it needed sausage. However, not having any sausage left, she decided to use hot dogs. She was the only one who ate it. It was never made again.’’

We could have guessed that last part, Tammy!

“I’m calling to let you know that my sister always made lettuce soup!’’

We don’t think she asked for seconds. 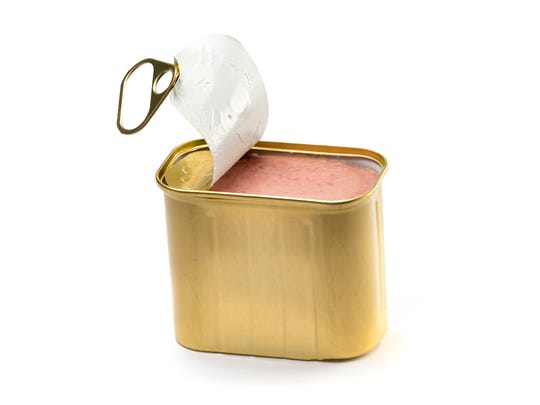 Just because you can, doesn't mean you should when it comes to making a holiday, er, surprise. (Photo: Getty Images/iStockphoto)

Roll them right out the door

Sue De Fortuna of Barnegat, New Jersey, loves the holidays, and she even loves stuffed cabbage.

But sometimes, it’s good to resist the urge to improve upon the original.

“My mother-in-law (an excellent Italian cook) decided to try a different ethnic cuisine to make a dish to bring to my Mom’s buffet Christmas Eve dinner,’’ she recalls in an email. “She made stuffed cabbage and thought it would be ‘festive’ to hold the cabbage rolls together with colored toothpicks.

“They smelled delicious. However, while the green blended in well with the cabbage, the red, blue, orange, purple and yellow ‘veins’ running throughout the dish proved to be quite unappetizing.’’

In the end though, it wasn’t all bad: “It’s a memorable and amusing story we still chuckle about from almost 40 years ago!’’

Make that the Feast of Six Fishes

Grace Depalma of Manahawkin, New Jersey, may or may not have savored the baccala and the smelts, but they aren’t the fish that left a bad taste in her mouth.

More: Feast of the Seven Fishes: A rich tradition preserved in South Jersey

“I want to tell you that on Christmas Eve my mother made a variety of fishes, seven in all,’’ she says in a voicemail. “The weirdest one of all was sea urchins, that’s u-r-c-h-i-n-s. My mother and one of my four brothers were the only one who ate them. Ugh! U-g-h with a ton of exclamation points after that!’’

Grease is the word

Richard Behr of Chadwick Beach Island, New Jersey, is a good storyteller, so I’m going to let him do the talking:

“As a kid, I lived in Jersey City. My grandmother lived downstairs. She had friends that lived in Secaucus and owned a pig farm. They gave my grandmother a suckling pig for our Christmas dinner as a treat instead of turkey. I guess it was about 10 pounds because it just fit in the roasting pan..

“I remember the pig in the pan about to go into the oven. Time passes — the table is set, potatoes are mashed, string beans with Seckel pears are waiting on the stove. Pop gets the pig out of the oven prepared to slice it into portions.

“Well, I guess no one told my grandmother that the pig should be roasted on a rack. The pig is in the roasting pan, in about two inches of grease that had cooked out of the pig. With some difficulty, choice words, Pop cut the pig the best he could,’’ he continued.

“Sadly, we could not eat it. While Pop tried to figure out how to cut it up, some of the grease was absorbed back into the pig. It was just too greasy to eat.

You lookin’ at me? 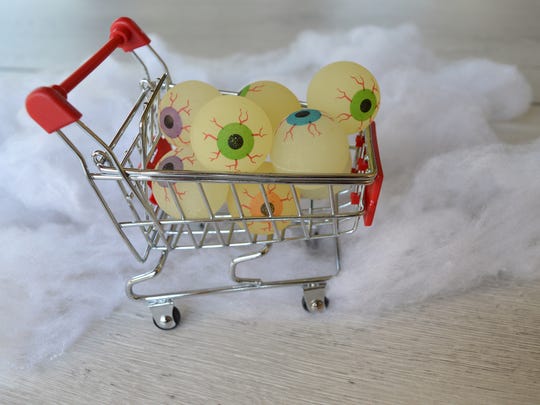 When shopping for a holiday meal, it's best to leave the eyeballs for Halloween. (Photo: DonnaSuddes, Getty Images/iStockphoto)

For Janis Sabatino of Winslow Township, New Jersey, a ghost of Christmas Not That Much Past came in not through a door or window, but on a platter.

“The weirdest food I ever saw on a table was the head of a goat even with its eyeballs intact,’’ she writes in an email. “I had seen these in store windows when I was a child walking with my father in Little Italy in Greenwich Village. But I saw it on the table a few years ago at my daughter’s in-laws from Sicily. Eee-uu-ww. Scary looking!’’

Orange is the new yuck?

“I never thought of this as a ‘weird’ Christmas addition to our dinner, but apparently it was not done in every home,’’ recalls Terrie Smith of Medford Lakes, New Jersey, in an email.

“The first time my husband-to-be ate Christmas dinner at our home he leaned over and whispered to me, ’Why are the mashed potatoes orange?’ My mother always cooked turnips and mashed them into the potatoes.  Bob never did like them, so I stopped doing it.’’

But Bob may have been alone in his leeriness, as Terrie misses the combo. “My daughter Lynn will sometimes make a small batch because they really taste fantastic together!’’

We’ve saved the best one for last …

You can lead your family to the holiday table, but you can't make them eat. (Photo: GMVozd / Getty Images)

Audrey Sanko of North Plainfield, New Jersey, has enjoyed plenty of traditional meals with loved ones at Christmas. But one year stands out from all the rest:

“Regarding the Christmas table, one year we had a big family dinner at my cousin’s house,’’ she says in a voicemail. “Karen set up a beautiful table, turkey trimmings and everything else. She had a fight that morning with her husband. And so when everyone was seated, her husband Stan came to the table with an open can and a small pot of Dinty Moore stew and proceeded to feed himself the stew while everyone else was feasting on the turkey.

“We were not happy about it at the time,’’ she says with a chuckle, “but of course we laugh about it now. That was clearly one of the weirdest things that happened to us.’’

You really shouldn't have ...

So, there you have it, folks. From our tables to yours, a very Merry Christmas and Happy New Year!

And remember, whether you’re spending Christmas with your nearest and dearest, gathering with new BFFs or dining with your partner’s clan: You are not required to partake of the mac 'n' cheese with trail mix, the kale cookies, the kombucha eggnog or anything with eyes, even if they are served to you with love.

Tammy Paolino covers restaurants, breweries, food trucks and arts events for the USA TODAY New Jersey Network. She’s an award-winning reporter and editor who has covered the Garden State for more than 30 years. Reach her at tpaolino@gannett.com or 856-486-2477 or on Twitter @CP_TammyPaolino. Help support local journalism with a Courier-Post subscription.