Anirudh Mamtora of Cherry Hill speaks about his TV appearance on The Food Network's Halloween Baking Championship and his love for making macarons. Cherry Hill Courier-Post

Cherry Hill pastry chef Anirudh Mamtora never imagined he’d be on a competitive show in the United States, let alone one on The Food Network.

But when he was picked as one of 10 contestants to complete on season seven of the "Halloween Baking Championship,'' he was overjoyed for the chance to share his talents on the big screen.

As host John Henson puts it, contestants have a “totally tubular time” as they “create mouthwatering and hair-raising desserts” to win $25,000 and the title of Halloween Baking Champion.

More: Beloved LBI eatery The Chicken or the Egg to open second location in Marlton 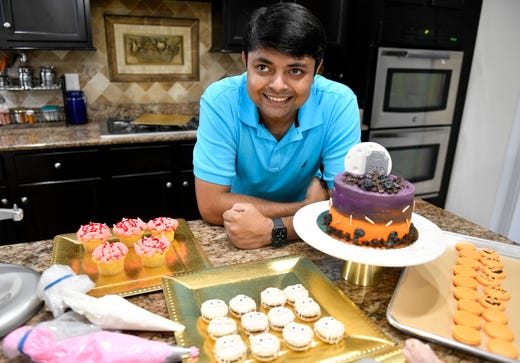 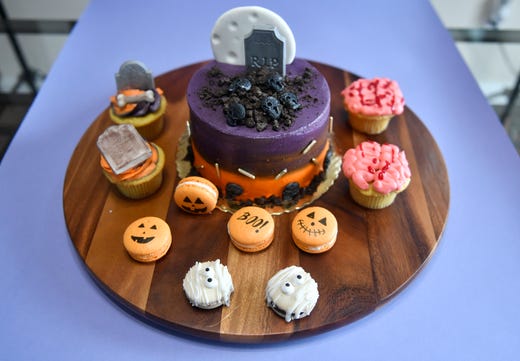 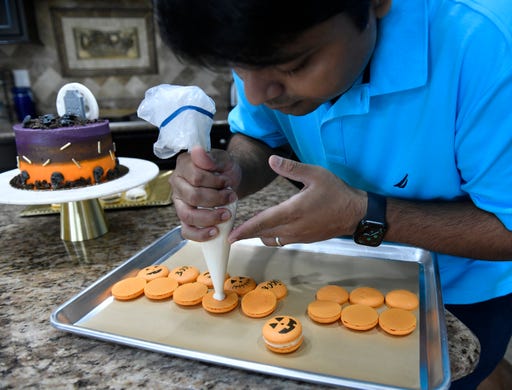 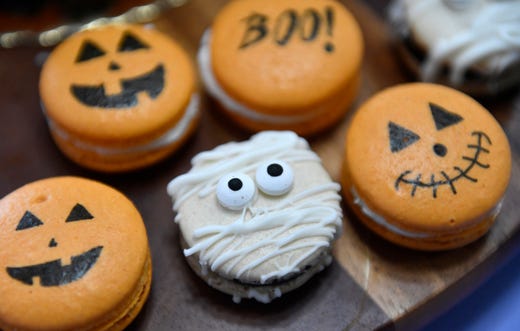 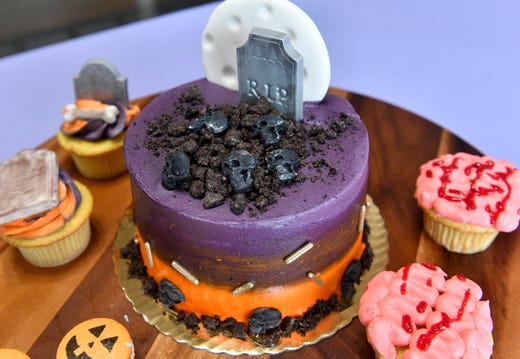 Anirudh Mamtora is ready for Halloween with a bunch of fun desserts for family and friends.    Adam Monacelli/Courier-Post
Fullscreen 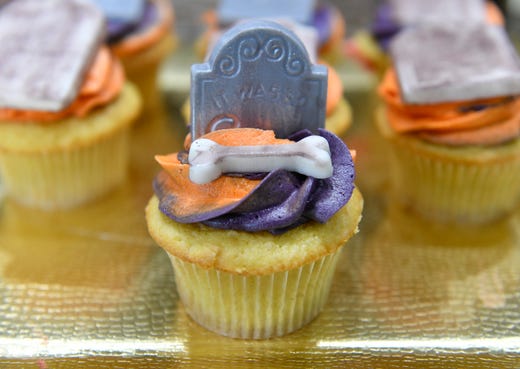 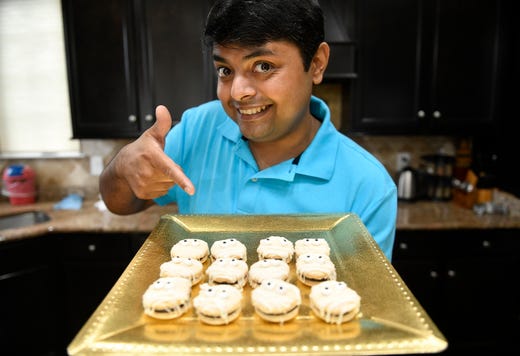 Anirudh Mamtora shared his French training and Indian background during his time as a contestant on The Food Network's Halloween Baking Championship. Adam Monacelli/Courier-Post
Fullscreen

The show that first aired in 2015 is now on its seventh season and showcases the country’s top bakers. Like Mamtora, they use their dessert expertise to battle it out throughout the spooky season.

The first episode of the new season aired on Sept. 13.

Although Mamtora didn't win the competition, he was happy to get the experience to work with talented chefs.

The split portrait cakes are coming together! #HalloweenBakingChampionshippic.twitter.com/covK5HwnYV

"I would say the experience was really, really great," Mamtora said. "I mean, I did not actually expect to make the good friends in the competition that I did. So, I feel that in a way I won, making new friends and connections rather than losing out on the competition, which was just a part of the whole thing."

From pastry school to the big screen

Mamtora's pastry journey began in France, where he studied the basics of pastries under French chefs through an exchange program scholarship.

Though he's been baking and cooking since he was 5 in his home country of India, it was while studying hotel management in college that he decided to combine his passions for art and food and pursue learning to create pastry.

After his training, he traveled Europe for a bit, before returning to France. There, he began working in five-star hotels and fine dining restaurants.

Later, he changed course, working on cruise ships and visiting 35 countries, which broadened his plate of desserts. He also taught pastry-making in India. 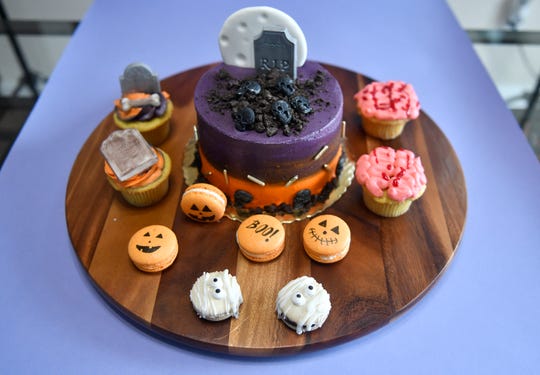 Anirudh Mamtora is ready for Halloween with a bunch of fun desserts for family and friends. (Photo: Adam Monacelli/Courier-Post)

After marrying Ruchi Banker in India, the couple settled in Cherry Hill, where she had been living.

From there, he worked at the former Bleu Bear Bakery in Haddonfield as head of operations, developing gluten-free products.

“So that was a learning curve as well as challenging for me in terms of actually enhancing my product portfolio,” Mamtora recalled.

Mamtora worked at the Haddonfield bakery for about a year and a half before he got the opportunity to bake on The Food Network.

An instructor from his days at The French Pastry School told Mamtora the show would be a good opportunity for him to share the intricate and detailed work he excelled at in school.

The network approached Mamtora to audition for the TV competition, and then he baked and described his creations for producers over Zoom calls, eventually being selected for the show. 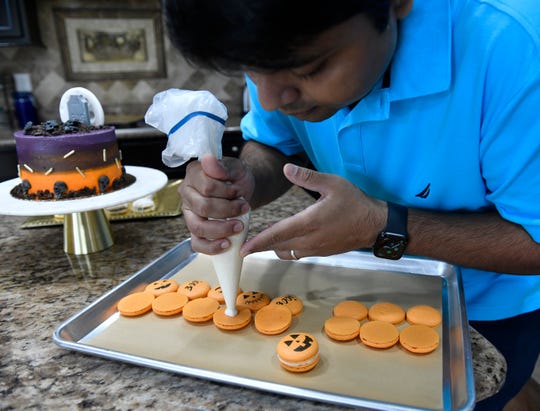 “First of all, I did not believe it when I got the email, and then I got a call right away from the producer and I was like, ‘You’re kidding, it cannot be true!’” Mamtora remembered.

“I was not even holding my breath for it because I knew that there are a lot of talented people … I did not see myself being picked up for the show. And once I found out, it really took me a long time to actually see, in reality, that I am actually going to be part of the Food Network's show.”

With the show behind him, Mamtora is excited to work on a new venture — a healthy dessert line for retail.

He’s working with Washington, D.C.-based Union Kitchen through their accelerator program to help him take his concept from startup to success. He hopes to launch the business next year.

“My whole plan is to make a healthy dessert which is gut-friendly, something that you can snack on and not worry about getting a lot of calories,” Mamtora said.

'A fusion' of classical French training and Indian spices

On the show, Mamtora brought his French baking expertise and Indian background to the challenge, incorporating traditional techniques with bold combinations of flavors.

“I’ve always been inclined towards the French desserts and the French techniques, as well as — because I have a cultural background from India, I have a knowledge of a lot of spices,” Mamtora said. “So I always try to do a fusion of both.”

In the first episode, he created a chocolate ganache pie with peanut butter dulce de leche crumble as his “Cereal Killer” for the first challenge and a cardamom rosewater-infused sponge cake with raspberry jam filling for the “really nerve-racking” second challenge, as Mamtora describes.

In the second challenge, the two made individual halves of a cardamom-spiced cake — Mamtora layered his with cardamom white chocolate ganache with toasted sliced almonds and coconut simple syrup.

Unfortunately, Mamtora ended up in the bottom four in the tally and entered the “Sudden Death” round, where he was challenged as a vegetarian to make a hand pie shaped like a severed hand, incorporating meat.

Despite an unfavorable outcome, Mamtora believes he made the most of the experience, which pushed him out of his comfort zone to learn and grow.

"I think that was a big win for me because had I not been in that position I would have never seen myself pushing beyond my limits," Mamtora said. "As long as I could develop and gain more out of the whole competition on a personal level, I'm more than happy."

Try something new this holiday

Halloween was an "alien concept" to Mamtora until he moved to the United States, as there is no holiday like Halloween in India and other South Asian countries, he explained.

High five to the bakers for their severed hand pies! Who do you think is safe? #HalloweenBakingChampionshippic.twitter.com/cD3qLj9OZO

When he learned more about the holiday, Mamtora quickly fell in love with the spooky season, especially the design of holiday-themed desserts.

"I started making desserts which were spooky and which were a little gross and not so presentable to your eye ... I kind of started falling in love with it (the holiday) because that was a way where I could pretty much do anything that I wanted and not be judged or that does not conform into a specific set of [dessert designs].''

For all the home bakers out there, Mamtora recommends trying his “Killer” cake from the challenge this Halloween — especially experimenting with his bold flavor combinations like cayenne, raspberries, cardamom and rosewater.

“That is something that you would not do as often or in normal times on Halloween, but it would be a fun twist to actually put those things together and actually see for yourself,” Mamtora suggested.

You can also decorate desserts such as his macarons with spice-infused filling and mummy or jack-o'-lantern caricatures.

"Halloween is something that everybody should take a moment and sit down and think about things that they could do so much differently if they're making some kind of a pastry and not be judged (for changing trying new flavors)."

Hira Qureshi covers food and drink for the Courier Post, Burlington County Times, Daily Journal, Bucks County Times and Intelligencer. She can be reached at HQureshi@gannettnj.com or 856-287-8106. Help support local journalism with a digital subscription.