Brothers Chris and Bryan Madigan pursued similar education careers. So it's not surprising they went into business together too.

The summertime pest can spread diseases, like West Nile Virus, encephalitis and Zika. Fortunately, we can keep their numbers down if we work together.

TOMS RIVER - Growing up two years apart in Toms River, brothers Chris and Bryan Madigan did many things together, from playing sports to attending the same college and pursuing similar careers in the education field.

Eight years ago, they continued that trend by going into business together as co-owners of Toms River-based Mosquito & Pest Authority of the Jersey Shore.

After both graduated from East Stroudsburg University in Pennsylvania with a degree in physical education, “Bryan and I each taught physical education and then became school administrators — Bryan as principal at Toms River Intermediate East and me as assistant principal at Toms River High School North,” said older brother Chris, 46, a resident of the Bayville section of Berkeley.

“One summer day in 2013, Bryan and I were on our way to an event in Monmouth County and happened to be driving behind a Mosquito Authority truck,” he recalled.  “I thought about how we couldn’t sit outside on our properties without getting eaten alive by mosquitoes and I said, ‘I’m calling them!’” 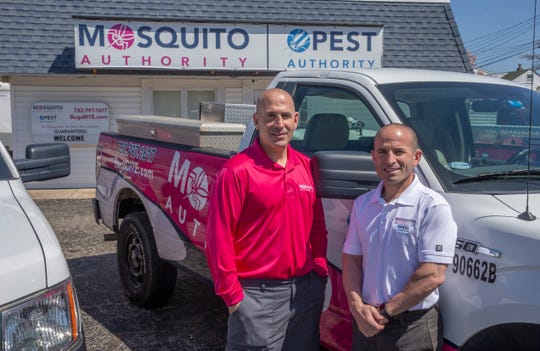 Chris contacted the owner of the business to discuss their service. “It was $79 for a treatment and I tried it and thought it was amazing — we had no mosquitoes for the next three weeks,” he said.

After learning that Mosquito Authority was part of a franchise and that no one owned the Ocean County territory, a light bulb went off.

"While Bryan and I are extremely dedicated to our careers in education, we were always entrepreneurial and discussing different businesses we could get into,” Chris said. “I quickly researched Mosquito Authority, spoke with their head of sales in North Carolina, and was impressed by their overall professionalism, delivery, setup and honesty. Bryan and I ultimately signed on to service all of Ocean County (except Lakewood, Point Pleasant and Brick) as co-owners of Mosquito Authority of the Jersey Shore and eventually expanded to become Mosquito & Pest Authority of the Jersey Shore in 2018.”

Blood suckers in the attic?:  Bat ticks discovered in NJ

Starting out with one truck and one customer that they serviced for free, “Bryan and I answered every call after we got out of school at 3 p.m. and brought on trained technicians during the day,” Chris said.

Since then, “we’ve grown to over 20 trucks and 25 employees, including a manager to oversee daily operations, and service thousands of residential, commercial, institutional and hospitality customers,” he said. 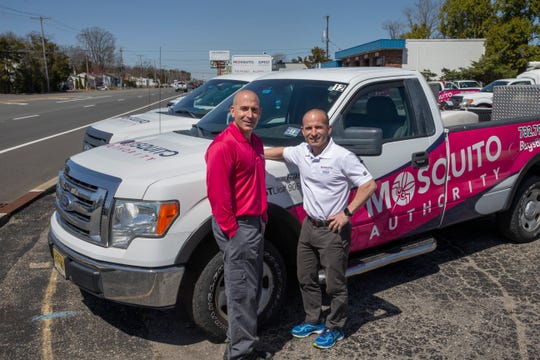 From his own hard experience, Chris knows what a nuisance mosquitoes can be.

“I was always getting bitten up and my body would itch for days, so when I tried this product and it worked, I was 100% sold,” said Chris, who’d previously tried every type of mosquito repellant at his home without success.

“Based on all of the diseases they transmit to humans and animals, mosquitoes are the #1 deadliest animal on the planet, and Lyme disease carried by ticks can also be very dangerous to both humans and pets,” Chris said.

The fact is, our lives don’t have to be ruined by mosquitoes,” he said. “This is a rewarding business to be in because we allow people and pets to safely enjoy their outdoor spaces.”

According to Chris, his company’s approach is simple. “Mosquito season runs from April through the end of October and during that period, we provide a total of eight treatments — one every three weeks for $79 each (with a 10% discount for signing up at the beginning of the season and paying up front),” he said.

“We want to get out there before mosquitoes take over and help you maintain a mosquito-free yard until the first frost. Our treatments cover both mosquitoes and ticks,” he noted, “but if ticks are a serious problem, we can apply a granular tick service for an extra charge.”

Three years ago, the brothers expanded their business to include treatment for 13 of the most common pests, including ants, spiders, hornets, roaches, mice and other rodents.

“Our ‘Barrier 360’ prevention program for $480 covers any initial pest problem and three additional services over the year, during which we’ll treat the foundation and fill any voids/openings so that pests don’t come in,” Chris explained. Customers who simply want a preventative program against pests can avail themselves of this service for just $360.

Among industry trends, “pesticides used today are very different than in the 1980s and 1990s and you can treat differently without exposure to toxic chemicals,” Chris said. “Our approach is to spray around the foundation outside and avoid chemicals inside the house. Also, as experts in mosquito control, our trained technicians spend time ‘tipping and tossing’ any standing water on a customer’s property where mosquitos can breed and applying larvicide to break their life cycle.

"We also inquire when and where on their property the homeowner got bitten so that we know which mosquito species was involved and where they’re likely to be," he said. "We know the pattern of different mosquitoes and can address them in a targeted way rather than just spraying the whole yard.”

What to watch for: Here are five of the most harmful invasive insects that have wreaked havoc in New Jersey

Chris said that he and Bryan rely on organization to juggle their many responsibilities.  “We don’t mix the business with our day jobs,” Chris explained. “We both get up at 4 a.m. to email customers or each other, get involved again after 3 p.m., and have great managers and staff members that we can count on.”

While many businesses struggled over the past year, “the pest industry was deemed an essential service, so we were able to continue to treat for mosquitoes, ticks and pests throughout the pandemic,” Chris said.

“At the same time, a lot of people stayed home and invested in home upgrades instead of vacations in order to enjoy their patio, pool, deck and backyard. We’ve seen more outside bars and gazebos being constructed than ever before,” he said. “Because people wanted to enjoy those spaces bug-free, we saw a boost in our customer base last year and are anticipating another staycation-type summer for many homeowners this year.”

Though they’ve had opportunities to expand throughout New Jersey, “we’re comfortable in the Ocean County area and feel that there’s still plenty of room to develop and grow as a company,” said Chris, who handles hiring, training and marketing with Bryan, while manager Matt Newman oversees day-to-day operations such as scheduling, routing and ordering.

Looking ahead, “we’ll be introducing misting systems this season that allow homeowners themselves to spray for mosquitoes and ticks through remote control access on timers,” Chris said. “We’re also very appreciative of our staff, customers and community and will be offering 100 free sprays per month for the whole season to frontline health care workers and first responders who contact us. Overall, we want to be the leading mosquito and pest control company in Ocean County, deliver the most outstanding customer service, and be the best employers we can be for our workers.”

As for his favorite part of the business, “I love hearing people say that our service changed their lives,” Chris said. “I experienced that and feel that what we offer is a game-changer, but it makes me happy to deliver that benefit to others. It’s the whole reason why we got into this business.”