COVID-19 triggered a dramatic economic shock, perhaps the most severe, sudden form of economic fallout ever recorded in U.S. history, according to the top executive at Huntington Bancshares.

"None of us have seen anything like this. This was an overnight drop-off," said Stephen Steinour, Huntington's chairman, president and CEO.

Factories shut down for weeks overnight. Shopping malls closed their doors. Small restaurants, bars, gyms and stores taped signs on the window saying they closed in order to contain the spread of the coronavirus. The virus began hitting the West Coast after spreading from China in late January or February and much of the economy temporarily stopped doing business as usual in March.

Steinour told me in a phone interview Friday that he doesn't envision a double-dip recession ahead, where the U.S. economy would recover after the official recession that began in February but then quickly stumble into yet another recession.

The governors across the country aren't expected, he said, to once again launch an all-out shutdown of business as the fight against the virus continues, especially if other efforts successfully limit the impact of COVID-19. Much will depend, he said, on keeping the mortality rate down.

Economists note that economic activity has been picking up, fairly quickly in some cases, as businesses reopen, re-hire workers and re-engage.

But Steinour doesn't foresee a swift rebound or what many call a V-shaped recovery either.

President Donald Trump has been hitting the 2020 campaign trail telling supporters, including those in Michigan, to expect a "super-V" economic rebound, even though some economists warn that the U.S. economy could see spottier or more sluggish gains.

More: Struggling to pay the bills, restaurants, other small businesses find a friend in banks

Steinour is in the camp that the economy will end up recovering gradually and still needs more support to rebuild disruptions in the supply chain and the significant inventory imbalances that have taken place.

Businesses and consumers continue to need to get on a better footing to stabilize and grow again.

"The needs are obviously much greater today than they were six months ago," Steinour said.

The Columbus, Ohio-based bank holding company has been rolling out a variety of programs that are pitched as ways to help consumers and small businesses work their way through the economic challenges ahead.

In early September, Huntington put a five-year, $5 billion plan on the table in Michigan that will target making investments, granting loans and engaging in philanthropic efforts to improve financial opportunities for Michigan businesses, consumers and communities. 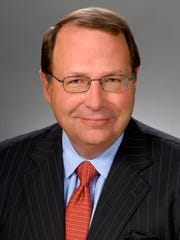 On Monday, Huntington introduced a 24-hour grace period for business customers, where commercial customers are given additional time to cover overdrafts on their checking accounts. The service copies one that's already offered to consumers.

As part of that free program, Huntington will automatically waive the overdraft fee as long as the business makes a deposit during the next business day to resolve the overdraft. The product is available for free on all Huntington consumer, business and commercial checking, savings and money market products.

The previous overdraft fee was $36 for businesses.

Huntington is also introducing a new "No Overdraft Fee $50 Safety Zone" that increases the amount allowed to overdraft from $5 to $50.

The new no-fee overdraft program gives customers more room if they are under modest financial stress.

Steinour said the bank will lose money on such a program but he said it's an important move to make at a time when small business owners may need extra leeway with their cash flow. Many companies, he noted, are paying their employees weekly but they're collecting money as they bill clients monthly. The cash may not be coming in soon enough to cover all the cash that needs to go out.

He said businesses need that extra support until they're on a more profitable footing and can better manage cash flows.

Steinour expects that many businesses will take advantage of the new overdraft grace periods as they work to rebuild their operations.

"The more we do sooner accelerates the recovery path for everyone," Steinour said.

Small restaurants and stores in local communities may need that extra help too, including the efforts planned as part of that $5 billion commitment.

"It's important these businesses come back. They make the neighborhood vital."