Republican U.S. Senate candidate Lauren Witzke in a tweet thanked Proud Boys a day after President Donald Trump was asked to denounce them.

Here are some of the top stories we're following for Thursday, October, 1, 2020. Wochit

A Republican U.S. Senate candidate on Wednesday thanked the Proud Boys, a far-right group with a history of violent confrontations, for providing security at a rally in Delaware.

In response, Trump asked for a specific group, and Democratic rival Joe Biden cited the Proud Boys – identified as a hate group by the Southern Poverty Law Center. Trump did not denounce the group, instead saying, "Proud Boys, stand back and stand by."

When asked for further comment about her tweet, Witzke, in a written statement, criticized the negative labeling of these groups and cited the media as playing a damaging role in the national rhetoric.

"Any media who engages in such labeling of patriotic Americans who defend themselves against violent terrorists like BLM and ANTIFA only serves to stoke societal unrest, and literally already has blood on their hands," she added.

In a tweet posted Wednesday afternoon, Witzke thanked the Proud Boys for showing up to one of her rallies to provide "free security for me when #BLM and ANTIFA were protesting my candidacy.

"I am grateful to them for volunteering their time to keep myself and my supporters safe!"

The Proud Boys showed up to one of my rallies to provide free security for me when #BLM and ANTIFA were protesting my candidacy.

I am grateful to them for volunteering their time to keep myself and my supporters safe!

Black Lives Matter, often shortened to BLM, is a global movement launched after the 2012 killing of Trayvon Martin with a goal to end systemic racism and white supremacy and to oppose violence committed against Black people. The movement has spawned hundreds of protests nationwide – especially in recent months after the death of George Floyd – as Black men and women continue to die at the hands of police.

Antifa, which is often erroneously lumped with Black Lives Matter, is an anti-fascist protest movement that is known for aggressive confrontations that have at times turned violent. The Anti-Defamation League describes them as "a loose collection of groups, networks and individuals who believe in active, aggressive opposition to far right-wing movements."

Noel Fritsch, a Witzke campaign spokesman, said the Proud Boys provided security at a Sept. 24 rally near Wilmington where a group of people came out to protest her candidacy.

This is the same rally in which a Witzke supporter pointed a gun at those protesters assembled across the street. The incident brought a quick denouncement from the candidate.

"Firearms should only ever be used to defend life and property. I denounce this behavior completely, and will support law enforcement as they work to resolve the situation," Witzke said in a statement shortly after the incident. 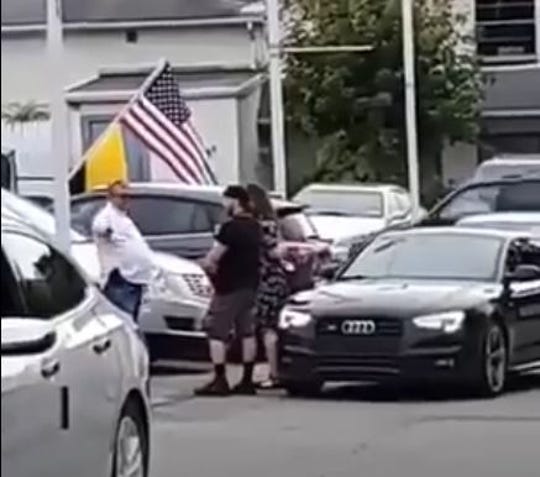 A man attending the "Defend Lauren [Witzke] Rally" points his gun in the direction of a group protesting the GOP U.S. Senate candidate. (Photo: COURTESY OF KRISTINA KELLY)

The gunman has not been arrested.

Who are the Proud Boys?

The Proud Boys group was founded in 2016 by Vice Media co-founder Gavin McInnes and described at the time as a politically incorrect men’s club for “Western chauvinists."

Current Proud Boys leader Enrique Tarrio, who is Afro-Cuban, says the group has "longstanding regulations prohibiting racist, white supremacist or violent activity," Ronald D. Coleman wrote in an email to USA TODAY. Coleman said he is a spokesman for the Proud Boys.

"We do not care what color you are or what your background is ... if you love America ... we consider you a brother," Tarrio said in a written statement provided by Coleman. The group condemns racism, fascism, communism and socialism, the statement says. 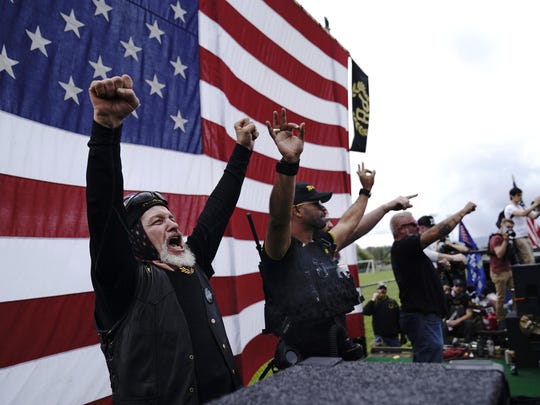 FILE - In this Sept. 26, 2020 file photo, members of the Proud Boys, including leader Enrique Tarrio, second from left, gesture and cheer on stage as they and other right-wing demonstrators rally in Portland, Ore. President Donald Trump didn't condemn white supremacist groups and their role in violence in some American cities this summer. Instead, he said the violence is a "left-wing" problem and he told one far-right extremist group to "stand back and stand by." His comments Tuesday night were in response to debate moderator Chris Wallace asking if he would condemn white supremacists and militia groups. Trump's exchange with Democrat Joe Biden left the extremist group Proud Boys celebrating what some of its members saw as tacit approval. (Photo: AP Photo/John Locher)

The group has garnered attention from organizations monitoring hate groups like the Southern Poverty Law Center, a legal advocacy organization that tracks and documents the existence of hate crimes and organizations promoting them throughout the country. The center has designated the Proud Boys as a hate group.

"Their disavowals of bigotry are belied by their actions: Rank-and-file Proud Boys and leaders regularly spout white nationalist memes and maintain affiliations with known extremists," according to the Southern Poverty Law Center.

The center also wrote that the group is known for "anti-Muslim and misogynistic rhetoric" and has appeared at rallies and events alongside other extremist groups like at the "Unite the Right" rally in Charlottesville, Virginia.

The Proud Boys founder filed a defamation lawsuit against the Southern Poverty Law Center in response to its designation.

The Anti-Defamation League described the Proud Boys as representing "an unconventional strain of American right-wing extremism."

The ADL also noted that the Proud Boys "have carved out a niche for themselves as both a right-wing fight club and a volunteer security force for the GOP."

Want to keep up with Delaware politics? Subscribe to Delaware Online for access to all our stories on how lawmakers and public officials are running the state.

Witzke's tweet about additional security garnered hundreds of shares, responses and likes online from people both supporting and condemning her comments.

Some praised her for publicly lending support to the group, while others drew connections between the Proud Boys and extremist groups like the Ku Klux Klan, criticizing her for her comments.

Coons released a statement late Thursday night about Witzke's comments, condemning both his opponent's comments and Trump's "refusal to denounce groups like the Proud Boys."

“These far-right groups don’t just promote hateful, bigoted ideologies, they pose a real threat to public safety and everyday Delawareans and Americans," Coons said. All of us – Republicans, Democrats, and Independents – must reject hatred, bigotry, and violence in all their forms, and hold perpetrators accountable. Delaware and our country deserve better.”