Michael Cohen created a Delaware LLC in 2016 to funnel "hush money" to a former adult-film star. Last week, Delaware dissolved it and another company.

Two companies created in 2016 by President Donald Trump's former personal attorney, Michael Cohen, to pay off women who claimed to have had sexual affairs with the then-real estate mogul, have been dissolved in Delaware.

The previous month he had created Resolution Consultants LLC with the intention, according to federal prosecutors, of reimbursing the National Enquirer's parent company for its $120,000 purchase of a story from former Playboy Playmate Karen McDougal about her involvement with Trump.

The media company, called AMI Inc., bought the story to prevent others from printing it in what is called a "catch and kill" scheme, according to prosecutors. It did not intend to publicize the allegations of an affair.

THE DETAILS: How Michael Cohen was outed for making a hush payment to Stormy Daniels for Donald Trump

President Donald Trump's former personal attorney and fixer Michael Cohen pleaded guilty on Nov. 29, 2018, to one count of lying to Congress about his work on a project to build a Trump Tower in Moscow. (Photo: AP)

The Wall Street Journal first reported on Cohen's payment to Clifford in an explosive early-2018 article. Later that year, federal prosecutors in New York filed United States of America v. Michael Cohen, a case in which they charged the former Trump "fixer" with evading taxes and making an unlawful campaign contribution, among other counts.

Last year, Cohen told Congress he created Essential Consultants in the fall of 2016 because Trump asked him "to pay off an adult film star with whom he had an affair, and to lie to his wife about it."

He did so, he said, "without bothering to consider whether that was improper."

"Mr. Trump directed me to use my own personal funds from a Home Equity Line of Credit to avoid any money being traced back to him that could negatively impact his campaign," Cohen said to Congress. 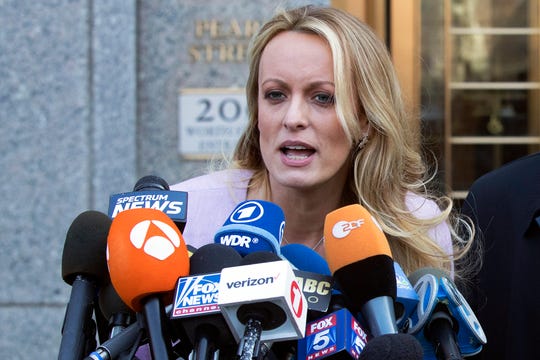 Trump first denied he knew about the payment before later acknowledging it in a string of Twitter posts in May 2018. He called the payment a private nondisclosure agreement.

"In this case it is in full force and effect and will be used in Arbitration for damages against Ms. Clifford (Daniels). The agreement was used to stop the false and extortionist accusations made by her about an affair,....." Trump said in one of three Tweets on the matter.

Want access to all of our stories? Subscribe to Delaware Online to keep up with notable people and events connected to the First State.

To create the Delaware LLCs, Cohen employed the help of a Dover company that registers and maintains entities on behalf of their beneficial owners. Cohen's full name is written at the bottom of his LLC's formation documents, though it was not legally required to be disclosed.

Known as a corporate capital, Delaware is the legal home to over one million business entities. Some of those have been used in the highest-profile global money laundering schemes in recent decades.

The Delaware Attorney General's office filed a complaint last year in the state's Court of Chancery seeking to cancel the registration of Cohen's two Delaware LLCs "because a corporate officer of each of the Defendants has pleaded guilty, and thus confessed, in federal courts."

The Delaware attorneys asserted that the companies had been used to purchase Clifford's and McDougal's "silence and prevent her story from influencing the election."

“We expect every Delaware business to follow the law, full stop, and my office will not hesitate to use our full authority to stop criminal abuse of a Delaware LLC or corporation,” state Attorney General Kathy Jennings said in a statement Monday.