Out and in the pulpit: NJ minister seeks to help lesbian clergy find acceptance

Through a new book and an online therapy service, Pamela Pater-Ennis provides guidance to clergy struggling with their sexual identity.

Out and in the pulpit: NJ minister seeks to help lesbian clergy find acceptance

Pamela Pater Ennis, Mdiv, LCSW, PhD, who authored " Out In the Pulpit ", which is about the challenges of Lesbian clergy, talks about her book at her office in Teaneck. NorthJersey.com

As an ordained minister and clinical social worker for over three decades, Bergenfield's Pamela Pater-Ennis has grown all too familiar with what she calls "religious trauma."

Many of her clients have been abused by clergy, ostracized by religiously judgmental families or rejected by their churches when they came out as gay, she recalled in a recent interview.

Faith is supposed to offer a sanctuary from suffering. But it can turn ugly, said Pater-Ennis, 62, who runs an interfaith counseling service with offices in Teaneck and Hoboken. Her mission, she said, is to help people "make sense of it when religion turns bad." 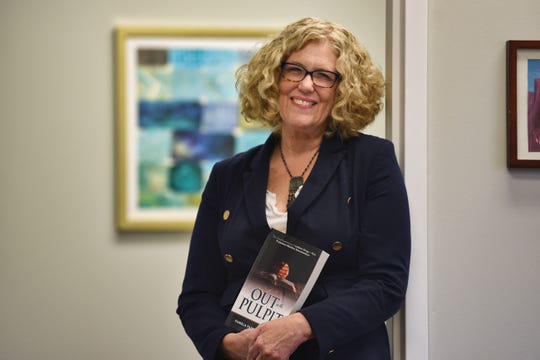 Pamela Pater Ennis, Mdiv, LCSW, PhD, who authored " Out In the Pulpit ", which is about the challenges of Lesbian clergy, poses for a photo at her office in Teaneck on 12/16/20. She is an ordained minister in the Reformed Church in America but works as a clinical social worker who helps people who have suffered because of religion. (Photo: Mitsu Yasukawa/Northjersey.com)

Pater-Ennis, who was ordained in 1984 in the Reformed Church in America, a mainline Protestant denomination, said she's both saddened and fascinated by the ways in which religion can cause pain. She recently launched Sanctuary Healing, an online spiritual coaching and therapy program to help clients address such trauma.

That followed the publication last year of "Out In the Pulpit," her book chronicling the journeys of 13 lesbian clergy who have struggled to reconcile identities as Christians and lesbians. The book grew out of her angst as a straight ally, she said.

The women she profiled were heavily involved in their churches growing up but were shunned when they came out as gay, Pater-Ennis said. They mourned the loss and yearned to return to religious life, but first, they needed to reexamine their own spiritual identities, explore their pain and find their way to a community where they could be accepted.

Eventually, all of them were ordained.

Filling a need: LGBTQ-inclusive books are hard to find. So these groups started sending them to schools.

One of the women featured in the book is Ann Kansfield, now a minister in Brooklyn. During her teenage years, she struggled with suicidal thoughts as she came to the realization that she was gay. An internalized homophobia forced her to keep quiet about her sexual identity, Kansfield told Pater-Ennis.

In particular, she feared revealing her secret to members of the downtown Rochester, New York, church where her family worshipped. It was there that she had found refuge from bullying classmates who tormented her for acting and dressing differently from the other girls.

But at age 18, when Kansfield came out, she was pleasantly surprised by the warm reaction of members at her First Reformed Church. "The congregation loved me the way I was," she recalled. Inspired by their faith and unconditional love, she decided to become a minister.

Yet after Kansfield studied in seminary for several years, she was not granted ordination.

Other women in the book recounted similar roadblocks. Some were kicked out of churches and seminary programs; others still fear they will be stripped of their religious station. Many struggled for years with guilt over their sexual orientation.

"The issue of homosexuality in mainline Protestant churches is currently considered the most divisive and debated issue," Pater-Ennis writes. "There appear to be existing attitudes within congregations that prevent the hiring of lesbian clergy. Many of the clergy who sexually identify as lesbians still found that they need to remain closeted to maintain their employment and their ordination status."

Pater-Ennis has never served in a church but performs her ministry through her counseling service, she said. She's also involved in Reformed Church leadership in Bergen and Hudson counties and at the Clinton Avenue Reformed Church in Bergenfield, where her husband, the Rev. Mark Ennis, is pastor.

Homosexuality has sparked fierce debates among denominations around the world. Passages in the Bible condemn the practice, which has historically been considered taboo by many houses of worship. The Catholic Church, for example, teaches that gay people must be treated with dignity and respect but that homosexual acts are “intrinsically disordered” since they "close the sexual act to the gift of life."

But views have been shifting. A 2015 Pew Research Center survey of religious beliefs in the U.S. found that 54% of U.S. Christians say homosexuality should be accepted. An increasing number of churches across the country now conduct same-sex marriages and permit the ordination of gay and lesbian individuals.

Several Protestant denominations have been at the forefront. When the United Church of Christ ordained an openly gay man in 1972, it was called a first in the history of Christianity. The Evangelical Lutheran Church elected its first gay bishop in 2013, and the Presbyterian Church welcomed the first openly lesbian pastor in 2012.

But that doesn't mean the path has been easy for all.

After studying at the New Brunswick Theological Seminary in New Jersey, Kansfield was informed that the Reformed Church in America wouldn't grant her ordination because she was an open lesbian. She subsequently was ordained by the United Church of Christ in 2011.

Leaders of the Reformed Church also suspended her father, Norman Kansfield, an ordained pastor who was president of the New Brunswick seminary, for performing his daughter's marriage to Jennifer Aull in 2004. He was defrocked the next year but reinstated in 2011.

Outcry over a wedding

"There was an outcry about our wedding which was definitely uncomfortable," Ann Kansfield recalled. "My dad got fired for performing our wedding. ... It was a great sadness for many in our denomination."

Today, Kansfield is co-pastor with Aull at Greenpoint Church in Brooklyn, where they aim to reach out to the economically disadvantaged and create an inclusive space for all worshippers, she said. Kansfield, who started there in 2003, said she is working on social justice issues as well as running food ministries for the underprivileged.

The congregation "chose me to be their pastor knowing who they were getting" and gave her a home, "where I could be myself in spite of systemic homophobia that is present throughout society," she said.

By 2015, Kansfield was sworn in as the first female and first openly lesbian chaplain in the history of the New York City Fire Department. She said she tries not to focus on prejudice that might be sparked by her identity.

"I'm sure there is a lot of sexism and homophobia out there, but I tend to not look for it," she said. "If you look for it, it's very easy to find, and once you find it, it can be disruptive and painful."

Many who have experienced prejudice from within their religion subsequently shut the church out of their lives, Pater-Ennis said.

But the author urges survivors to seek counseling from a religious professional to work through those issues and then to return to some type of spiritual realm where "they can find their own inner peace."

Deena Yellin covers religion for NorthJersey.com. For unlimited access to her work covering how the spiritual intersects with our daily lives, please subscribe or activate your digital account today.