New Jersey's representatives in Washington, D.C., blasted the violence at the hands of pro-Trump protesters on Wednesday.

As protests grow outside the Capitol, the Senate Majority Leader issues a stark warning to colleagues. USA TODAY

From inside the U.S. House chamber, Rep. Mikie Sherrill heard banging and voices. She received updates that rioters were coming closer. Soon Capitol police barricaded the doors and drew their guns as people tried to push inside.

Members of Congress were told to get down, get low, get behind things so they would be as safe as possible if there was a shooter, Sherrill said in a phone interview Wednesday afternoon. She heard glass break, and ultimately crawled out of the nation's halls of power to safety.

"Everyone was very calm and collected, getting out their gas masks and preparing to leave," said the second-term congresswoman from New Jersey's 11th district, which covers parts of Essex, Morris, Passaic and Sussex counties.

She'd trained for emergencies like this during her days as a Navy pilot.

"This is stuff that you train for quite a bit in our military and I have been in certain situations that were very tough like that," she said.

Sherrill and the 13 other members of New Jersey's delegation to Washington, D.C., are safe after pro-Trump rioters stormed the Capitol on Wednesday. Several members remained hunkered down in Washington as the violence continued.

New Jersey's largely liberal delegation quickly decried the violent pro-Trump mob and pledged to finish the job confirming Joe Biden as the next president. Both of the New Jersey delegation's Republican members urged Trump to call off lawbreakers.

"I'm safe on the Capitol grounds," Democratic Rep. Tom Malinowski, whose district includes Hunterdon County and parts of five other counties, tweeted about an hour after people swarmed the Capitol. "The moment we get the all clear, I say we go right back in the Chamber and finish the damn job."

My staff and I are safe.

It’s disgraceful that Trump and his allies have enabled this violence and attacks on our democracy.

Grateful to the Capitol Police for keeping us safe.

The rioters disrupted Congress' counting of electoral votes confirming President-elect Biden's victory. Chaos began soon after President Donald Trump told his supporters during a speech near the White House that he would "never concede" the loss to Biden.

The president's supporters then marched down to the Capitol, scuffling with police and breaking into the building. Security rushed Vice President Mike Pence out of the Senate chamber as the Capitol was placed on lockdown. The chaos endured for hours. One woman was shot and killed, more than a dozen people arrested, and the National Guard was called in to restore peace.

Rep. Jeff Van Drew, a South Jersey Republican who defected from the Democratic party in 2019 and who planned to object to Biden's win, told a reporter for the USA TODAY Network New Jersey the president should "encourage all of the protesters to go to the areas that are marked and indicated for them to be and to protest peacefully, safely, and intelligently."

Rep. Chris Smith, who has represented the 4th district's slices of Monmouth, Ocean and Mercer counties since 1981, said he was writing a speech saying he would vote to confirm Biden's election when alarms sounded in the Rayburn Offices. Smith on Wednesday again supported Trump's challenge to the election results via the courts, but said Trump should condemn violence.

"(Trump is) free to say whatever he wants, but he has to be outspoken on nonviolence and following the rule of law," Smith said. "My sense is that, as soon as anything was happening up here that was law-breaking, he should have found the biggest megaphone and said, 'Cease and desist. Stop it immediately.'"

Van Drew and Smith's Democratic colleagues from the Garden State didn't mince words as they pointed the finger directly at Trump.

"What we are witnessing is an attempted coup directly incited by the criminal in the White House," Rep. Bill Pascrell, a Democrat who represents Bergen and Passaic counties, tweeted. "It will fail."

Sen. Bob Menendez said on Twitter that what was happening "in the Capitol goes against every value we pledge to uphold as a nation. Democracy will prevail."

In a statement hours later, Menendez said Trump's lies about the election result and the Republican lawmakers who refused to certify the electoral votes were responsible for Wednesday's act of "domestic terrorists storming Congress and desecrating the Capitol."

“Accepting losses at the ballot box is never easy — but it is the American way," Menendez's statement reads. "Should Americans lose their faith in the integrity of our elections, from the White House down to the school board, we may soon be left with nothing but the shadow of a once great Republic." 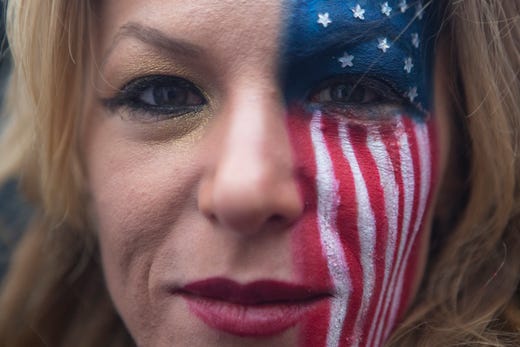 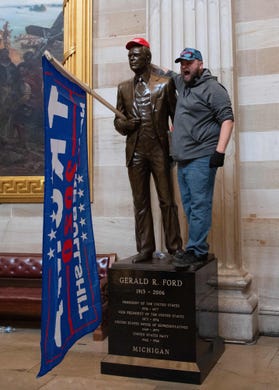 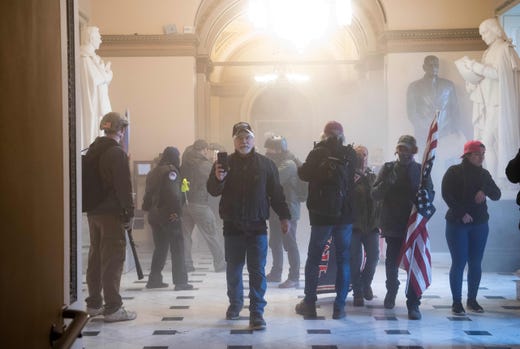 Pro-Trump rioters protest inside the US Capitol on Jan. 6, 2021, in Washington, DC. - Demonstrators breeched security and entered the Capitol as Congress debated the a 2020 presidential election Electoral Vote Certification. SAUL LOEB, AFP via Getty Images
Fullscreen 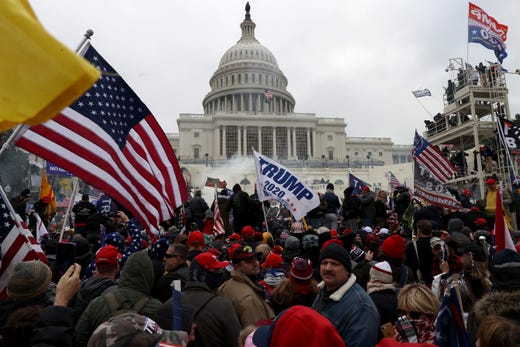 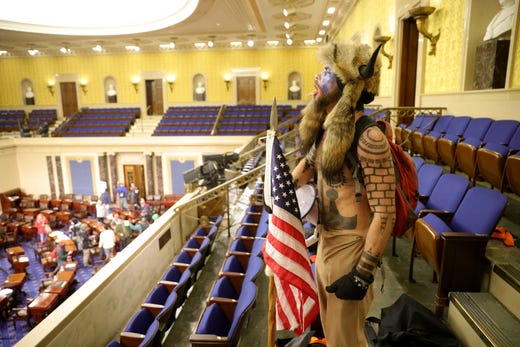 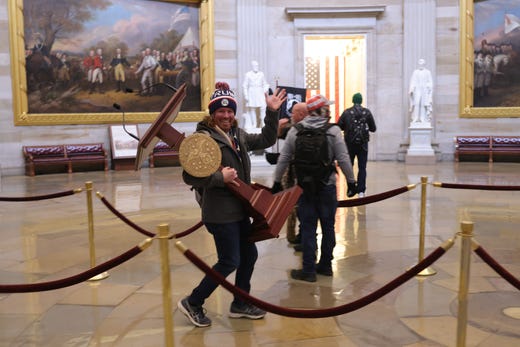 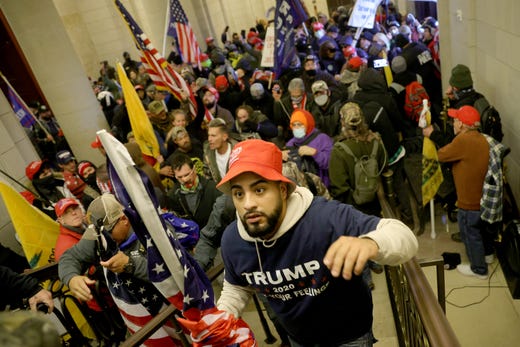 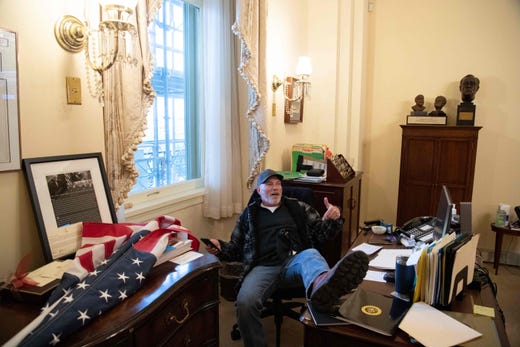 A supporter of President Donald Trump sits inside the office of U.S. Speaker of the House Nancy Pelosi inside the U.S. Capitol in Washington, D.C., on Wednesday, Jan. 6, 2021. SAUL LOEB, AFP via Getty Images
Fullscreen 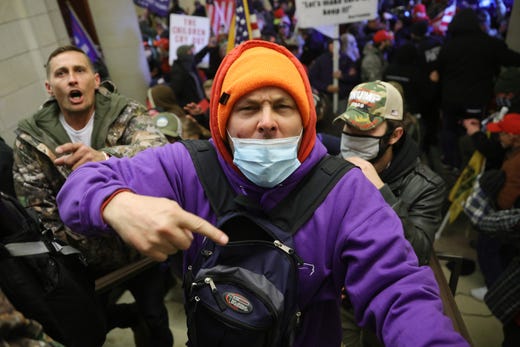 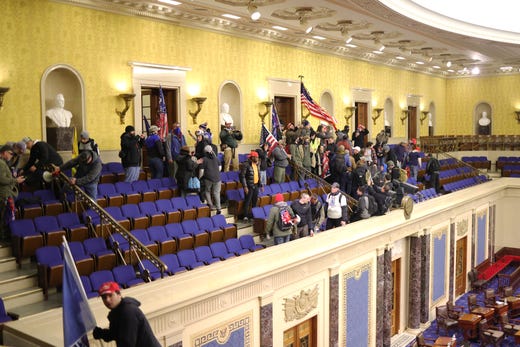 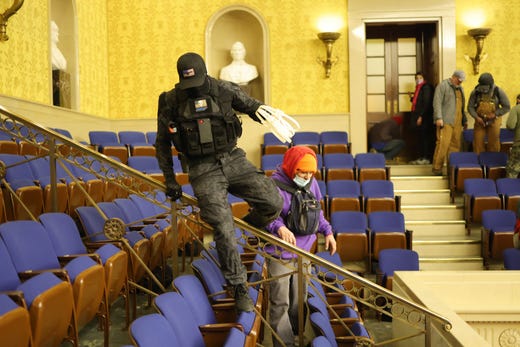 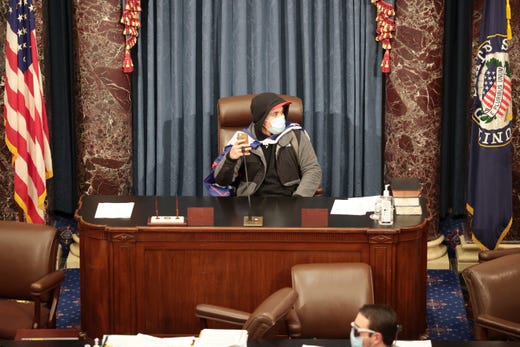 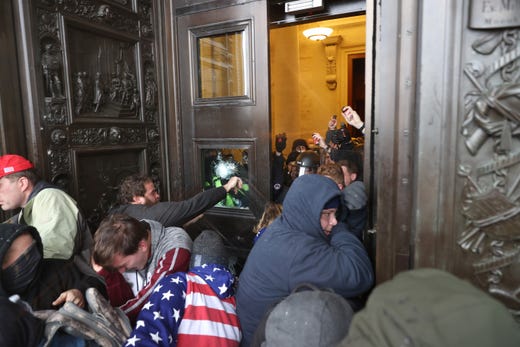 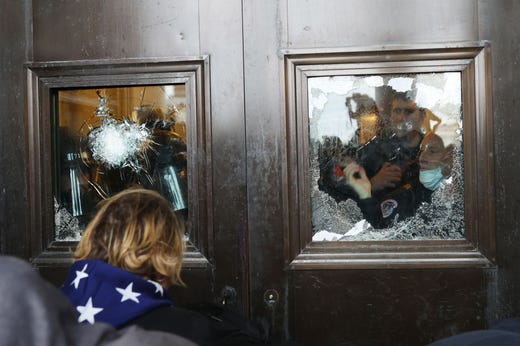 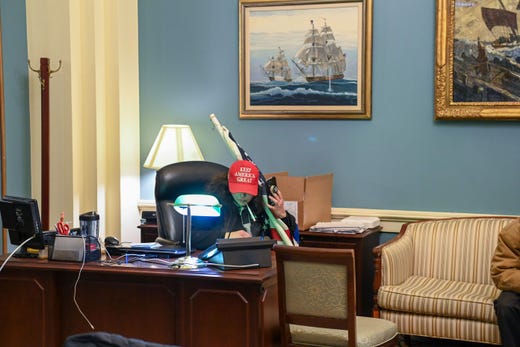 A supporter of US President Donald Trump sits at a desk after invading the Capitol Building on January 6, 2021, in Washington, DC. SAUL LOEB, AFP via Getty Images
Fullscreen

In a phone interview from his office in Washington, Rep. Frank Pallone said that at about 4 p.m. he could still see protesters "storming the Capitol" and engaging with police. Responsibility for the violence falls on Trump, he said.

.@JoeBiden is right – enough is enough. It’s past time for President Trump to simply accept that he lost the election and call off the mob. Congress will get back to certifying the election and ensuring that our democratic processes continue.

Rep. Andy Kim, a second-term Democrat who represents most of Burlington and parts of Ocean counties, said the atmosphere remained chaotic hours after the mob breached the building.

"There is no steady stream of information," he said. "We still don't have full control. ... I am just filled with sadness for our country and our democracy that we had something like this happen."

Tensions remained high among lawmakers, too. James Gee, chief of staff for Democratic Rep. Bonnie Watson Coleman, said the congresswoman was moved to a location with other House members where she was asked not to talk on a cellphone. But Watson Coleman, who represents parts of Mercer, Middlesex, Union, and Somerset counties, laced into a Republican who had planned to challenge the Electoral College vote.

The name of the Republican was not disclosed.

“She told him ‘You shouldn’t be in this room. You should be outside stopping your people,'’’ Gee said.

Later, in an interview, Watson Coleman said was at a meeting in a separate room in the capital, unrelated to the vote, when security guards locked her inside. Eventually, police knocked on the door.

"We were behind locked doors,'' she said. "We said, "Yeah, right show us your badge. Which they did and showed us to another door." From there she was escorted to an undisclosed location with other House members. She was still in the room as of 6:20 p.m.