For immigrants in New Jersey and Pennsylvania, Trump supporters storming the nation's Capitol as Congress met last week to certify presidential election results revealed the fragility of American democracy and the illusion of American exceptionalism.

For Ahmet Tekelioglu of Allentown, Pennsylvania, the insurrection was, on one hand, not surprising given the rise of white supremacy and  populist leaders like Trump gaining a foothold around the world, and many white people feeling their power and influence is being stripped away. 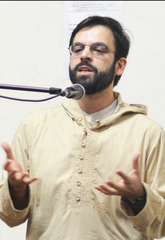 On the other hand, Tekelioglu said the breach of the Capitol and ensuing violence was surprising because there is a false sense of security and superiority in the United States that makes people think such incidents could never happen here.

"So all of that really tells you that we can make Trump a scapegoat but the problem is more than Trump," Tekelioglu said. "If you are not like [Trump supporters], if you are Black, if you are Muslim, if you do not subscribe to what their idea of what good Americans are, then it's very easy to devalue, dehumanize you and what you stand for and your world. I think that's something we need to pay attention to."

Tekelioglu works as the education and outreach director at CAIR Philadelphia, the Philadelphia chapter of the national nonprofit that supports Muslim civil rights and advocacy. He immigrated to the United States from Turkey in 2007 as a graduate student, first living in Boston and then moving to Pennsylvania in 2016.

Capitol riot: Norcross: Capitol takeover 'will go down in history - and how sad'

He was working at Panera Bread in Collegeville, Pennsylvania, when he first heard the news but didn't see the full extent of what was going on until after work, he said, hearing only parts of it from co-workers in meetings.

Tekelioglu, who has lived through coups and other unrest, said people back home point out the double standards the United States maintains during times of civil unrest in other countries, using patronizing language to condemn the countries' people.

"I think that's also respective of the fact that in many cases, unfortunately, the United States has been either on the supporting or facilitating side of coups in these countries whether that's in Pakistan, that's in Turkey or that's in Egypt and any other places," Tekelioglu said.

The discourse about the incident, Tekelioglu said, requires "visual thinking," meaning people need to think about the insurrection by seeing and recognizing the strength of anti-Black, anti-Muslim and anti-minority rhetoric that has been brewing.

Mary from Bensalem, Pennsylvania, who asked to withhold her last name, was working when her husband showed her the news of the insurrection.

"The worst part was when I saw them — they had the U.S. flag up that's flying and then they had another flag ... that they took down and put a Trump flag up, that was like, 'Wow they're taking over the country,'" she said. "It's like how you see in shows the Nazi come in and take over your country or your building, it just symbolized that to me."

Mary, an administrative assistant at Welcoming the Stranger, an educational nonprofit for ESL classes in Langhorne, Pennsylvania, emigrated from Malaysia to the United States about 30 years ago for the freedoms the country had to offer, like religion and education, she said. But she said it's "definitely not the country I adopted 30 years ago."

"But I feel constrained now," Mary said. "I feel I'm in a box sometimes, but the freedom is still there. It's still a great place to stay."

Mary said the rioting in D.C.  reminded her of an incident in her home country in 1967 that involved racial tensions.

"We had a lot of things going on there — that fear came back to me," Mary said. "That there were people going to be surrounding us."

Since President Trump took office, especially during the first months, Mary has been afraid to walk around town on her own, she said.

Seeing a country of double standards

For another Bensalem resident, Vanessa Woods, the insurrection reminded her of stories she would hear of the civil wars in her home country of Liberia.

During a work break, Woods turned on the news last Wednesday to find "the hell that was unfolding." She was surprised, speechless and confused.

"I thought surely, to myself, this is not real," Woods said. "I felt numb and then grossly disappointed. It was not how I was expecting the start of 2021."

Woods, who is on the Bucks County New American Commission and the Bensalem school board, grew up in the United States but emigrated from Liberia with her family due to civil unrest in the country.

Although she was too young to remember much of what took place, she blames the violence in her home country on "the insatiable need for power'' that permitted "citizens of the country to fight amongst each other solely based on what region a person was from.''

Last week's events made her feel as though something similar could happen in the United States, she said.

Dr. Jubril Oyeyemi, a primary care physician in Cherry Hill, New Jersey, was working at a free clinic and didn't know anything was going on until a co-worker said to turn on the TV because there was something "insane" happening.

Oyeyemi felt disappointed and embarrassed watching the mob breach the Capitol, he said, adding that it was a culmination of President Trump's behavior since the most recent election.

"As a Black man, it was the worst demonstration of that white privilege," he said. To him, it clearly reflected the reality that if the mob had been "Black, Muslim, anything probably but white, the response would've been entirely different." 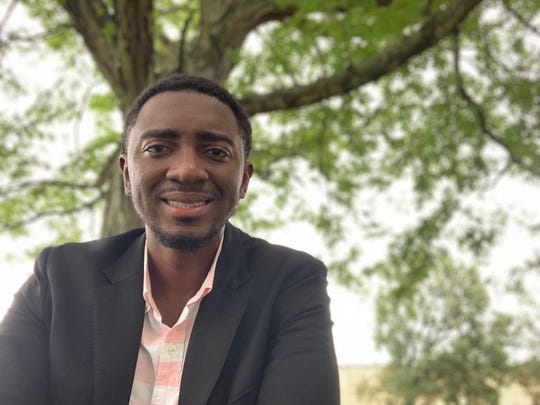 Although he knew some reaction was coming, what shocked Oyeyemi was the degree to which the incident played out and the loss of life "as a result of all the inciting that the President has been doing."

Oyeyemi emigrated from Nigeria in 2002 for medical school, training in Philadelphia and then moving to Cherry Hill with his family.

He said the riot at the Capitol is not what you expect to see in the United States. There is an expectation of orderliness, clean elections and peaceful transitions of power, he said.

"This is just another manifestation of the fact that there are people who would do something like this, who, when the President called [upon them] to behave like that, actually traveled far and wide, left their personal lives and laid it out all on the line," Oyeyemi said. "It's really scary to think that they were willing to do that."

Eajaz Rawoof, from Mount Laurel, New Jersey, said the riot revealed the privilege that exists in the most extreme sense. 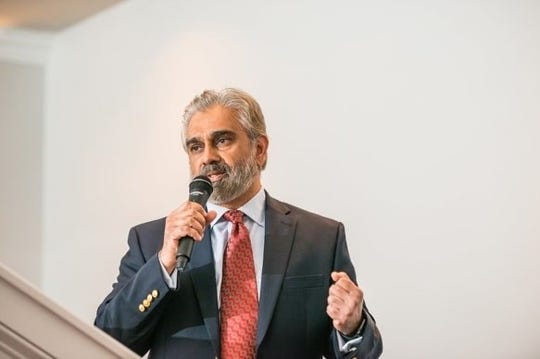 With Trump supporting law enforcement and members of Congress becoming targets of last week's event, Rawoof said "It's interesting even that the people who enabled him and supported him eventually became targets of his hypocrisy, lies."

"It was a terrifying situation but what is different here is that it was not a minority group, it was the majority and doing it against their own people at the highest office and the actual cradle of democracy."

With this privilege, Rawoof feels the rioters have the luxury of individual consequence unlike minority groups who often are stereotyped and grouped together, such as during the Black Lives Matter protests last summer.

Rawoof emigrated from India in 1986 and has been living in South Jersey for 15 years.

As an immigrant, he said there's a sense of estrangement with his home country of India where Muslims like him are being persecuted, and his adopted country where he is being dehumanized in the same way.

But Rawoof said what makes it more terrifying in the United States is the power of a president.

"I think the dangerous thing about the president in the U.S. is the amount of power he has," Rawoof reflected. "He is arguably the most powerful person in the world ... All kinds of injustice are bad but the power that an American president wields is huge."

Rawoof, a business software consultant and on the board of the Muslim Federation of South Jersey, had been tracking the news of the Georgia run-off so he was shocked and outraged, but did not think it was totally  unexpected.

He is a veteran and watching the day's events unfold through the lens of someone who has served his country made it even more upsetting.

"As a person who understands how the military works and how police work, I just couldn't believe that had happened and then on top of that to see the people inside - I guess what really got me was to see the confederate flag inside," Tuero said. "That's when I really got upset."

Tuero lives in North Bergen with his family. His son, Sam, attended Rutgers-Camden, where he was founder of the Rutgers Camden chapter of Define American, an organization for undocumented students. 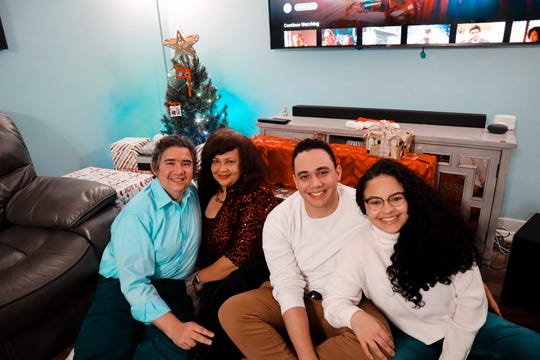 The Tuero family on Christmas eve 2020. Saulio sits on the left and Sam in the middle. (Photo: Courtesy of Saulio Tuero)

As a social studies teacher in a school full of immigrants, Tuero said he teaches how America can be, while balancing a broader view of what America  is.

"The countries that they've left, they have seen how this (the insurrection) happens," Tuero said of his students.

Tuero emigrated  from the Dominican Republic in 1966. His father decided to move the family because of the corruption in their home country.

"[My father] would tell me stories of mobilizing against Trujillo, the dictator who was there for 31 years supported by the United States, and what he would do as a kid to do that," Tuero recalled. "I kind of grew up in that household where there was a lot of people talking about that ... and I got a lot of that today for my kids."

'There is a change happening'

However, immigrants and other minorities have agency to make changes for the better, Rawoof said, by getting involved in local politics and government.

Rawoof said he's seen the resurgence in New Jersey with elected officials such as Mayor Sadaf Jaffer of of Montgomery Township and Fozia Janjua, who serves on the township council in Mount Laurel.

"There is change happening," Rawoof said. "On the positive side, the hope is that even if it was a close election, I think things could have been more bleak if we had four more years of this."

Hira Qureshi covers food and drink for the greater Delaware Valley and Jersey Shore. She can be reached at HQureshi@gannettnj.com or 856-287-8106. Help support local journalism with a Courier-Post subscription.