As A New View bids adieu, what was the $1 million project's impact in Camden?

A New View's Sunset Farewell is from 2 p.m. to sunset Sunday at Cooper Poynt Park on the Camden Waterfront. The event includes food, music and more.

As A New View bids adieu, what was the $1 million project's impact in Camden?

A New View Camden, a multi-site art installation, debuts Thursday. Its purpose: to bring art to Camden and attention to the problem of illegal dumping. Cherry Hill Courier-Post

CAMDEN — How do you measure the impact of art?

That's a question Meishka Mitchell, Kris Kolluri and the rest of Camden Community Partnership (CCP) are trying to answer as they wrap up A New View Camden, a six month-long, multi-site art installation funded by a $1 million Bloomberg Philanthropy grant.

The project, which will wrap up Sunday afternoon with a celebration at Cooper Poynt Park on the city's Waterfront, was conceived as a way to bring attention to the problem of illegal dumping in a city plagued by it.

A large black panther made from car hoods was ready to pounce riders on the PATCO Hi-Speedline. A giant robot made from scrap metals and other materials greeted drivers along State Street in Cramer Hill. Bamboo phoenixes rose on a lot just off the Admiral Wilson Boulevard. A massive turntable captured sunlight along the waterfront. 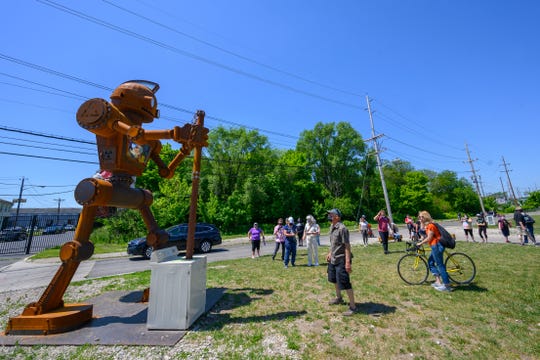 And two South Jersey artists — photographer Erik James Montgomery and craftsman Tom Marchetty — brought their respective talents to sites all over Camden, with portraits showing the best part of the city, its people; and parklets made from reclaimed wood, metal and other materials.

The question is whether the art had the intended effect: Did it draw attention to illegal dumping, and will it mean less trash gets left in Camden's empty lots? 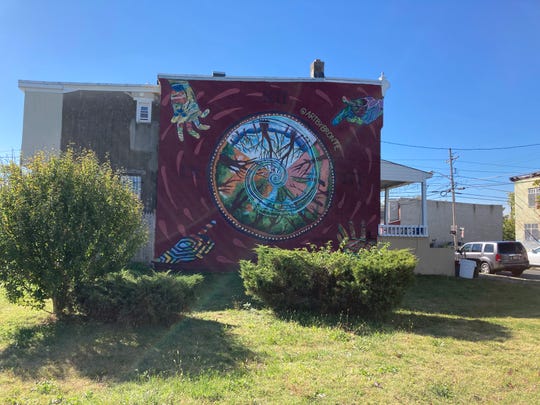 A mural by Adriana Anador-Chacon is on the side of a house in North Camden. She was an apprentice artist for A New View Camden. (Photo: Phaedra Trethan)

The verdicts aren't completely settled yet, but, Mitchell noted, in at least one literal sense, the effort was successful.

"In the entire time we had these (installations), we did not see anything dumped in any of the sites," she said. "When residents are visiting a site, caring for a site, and there's an art intervention there, it's a signal, a deterrent to dumping."

But, admitted the Camden native, "The challenge continues in the city, and the overall impact will take some time to measure." 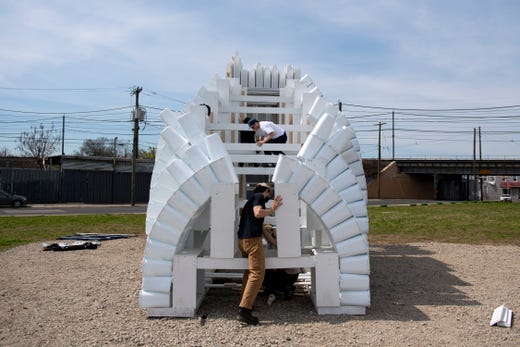 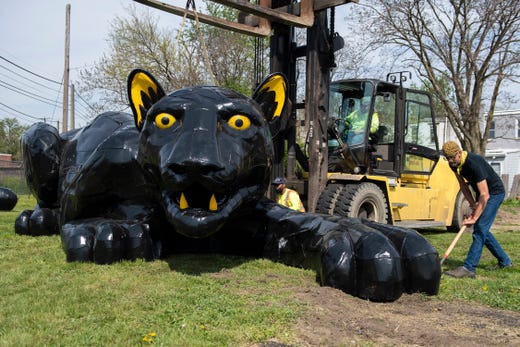 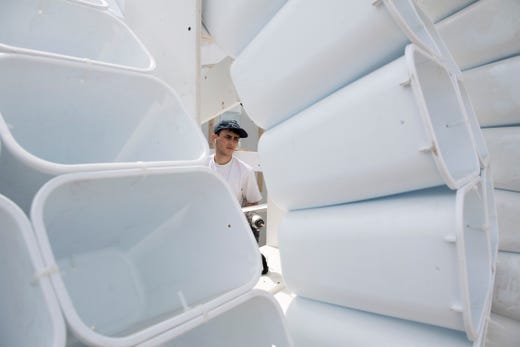 Crew member Zach Greer climbs out of 'Invincible Cat' as it is installed in the Whitman Park neighborhood of Camden, N.J. on Tuesday, April 20, 2021. JOE LAMBERTI/USA TODAY NETWORK NJ
Fullscreen 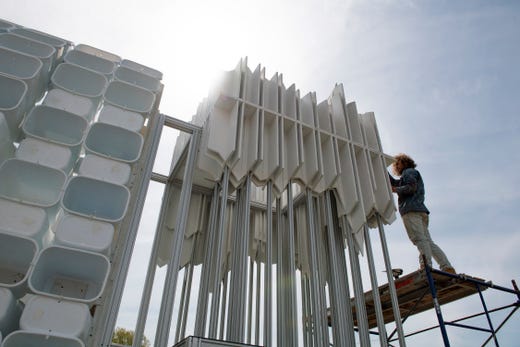 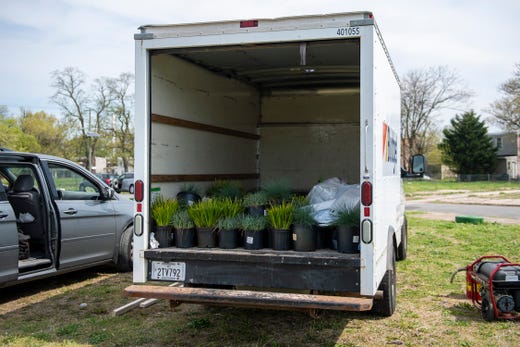 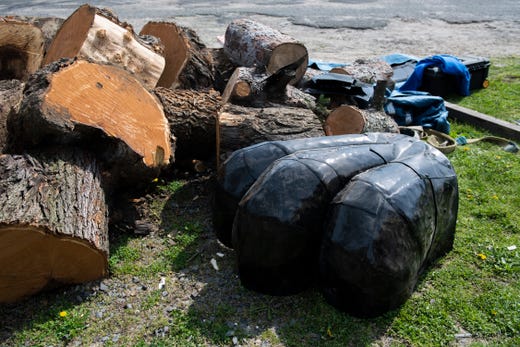 A paw yet to be mounted on 'Invincible Cat' in Whitman Park neighborhood of Camden, N.J. on Tuesday, April 20, 2021. JOE LAMBERTI/USA TODAY NETWORK NJ
Fullscreen 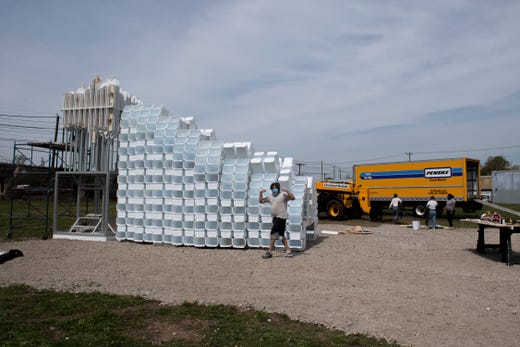 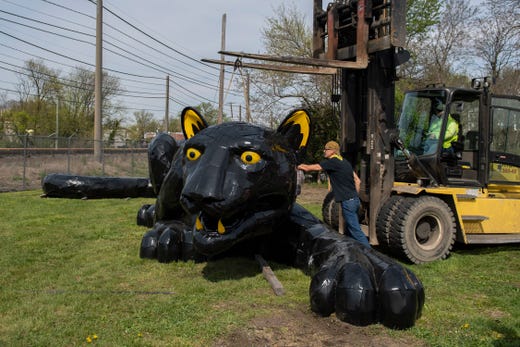 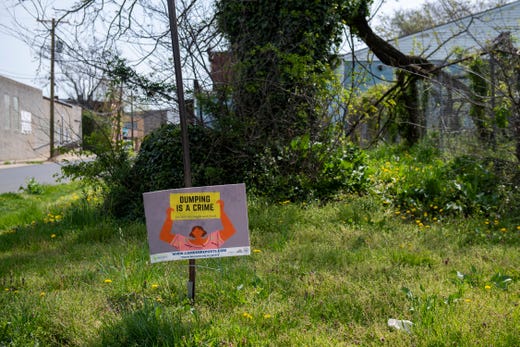 Both Bloomberg Philanthropies and the Walter Rand Institute are working to measure some of the impact of the project.

Nearly 1,000 people attended in-person events, with "I Bike Camden," "I Paddle Camden," a performance by the Trenton Circus Squad and a screening of the Pixar movie "Soul" among the most popular events. Virtual events drew more than 1,500 people, with the opening on Facebook Live watched by more than 1,400 people.

Those people, he said, now realize "this is not a thing harkening to something in the past, the environmental racism that happened in Camden's history. This is happening now, this is people's lived experience in the present. There are still at least 58 active dumping sites in the City of Camden."

More: Haitians, who have a strong presence in New Jersey, want to help their people back home

Two of the installations will remain: Invisible Cat will be moved to Farnham Park just across from Camden High, whose mascot is a panther. And the phoenixes will remain on Federal Street. Marchetty's parklets will also stay in Camden.

At the pop-up pizza oven park at 5th and Erie Streets in North Camden, the oven and earthen benches will go, but two murals created by those apprentices will remain for the foreseeable future: one by Adriana Anador-Chacon and one by Priscilla Rios. 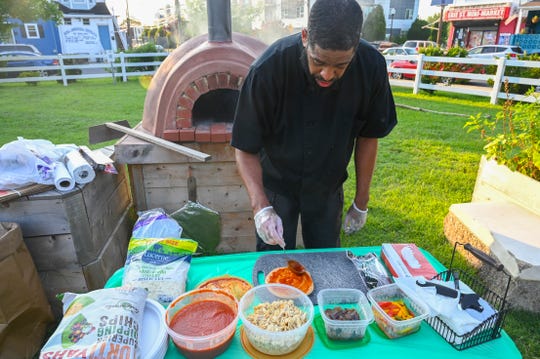 Camden residents could make their own pizza at a pop-up park with an oven at 5th and Erie streets. (Photo: Avi Steinhardt/Camden Community Partnership)

The installations helped raise awareness to residents and outsiders alike that illegal dumping is a real problem, and spurred one South Jersey lawmaker to introduce legislation to stiffen penalties and strengthen enforcement.

"People realize it's not just a nuisance; it impacts the quality of life in the community," Mitchell said. "It impacts how children see their home when they walk by it everyday, the way they can play outside, the way people can enjoy their homes, or have people come over for a barbecue outside."

She alluded to a massive pile of dirt illegally dumped in Bergen Square, and the city's and state's ongoing frustrations in getting it removed: "It really points to the lack of mechanisms to deal with illegal dumping."

"Everyone needs to ask why? (A New View) has been a way to amplify this environmental injustice and the lack of tools to address it."

Providing people with safe, vibrant and artistically inspiring places to gather over the spring, summer and fall also helps change perceptions of Camden.

She met people who hadn't visited Camden in years or decades as they biked, kayaked or took walking tours of the sites. She's hoping those visits helped them realize Camden residents are just like them: They want a clean, safe place to live and raise families.

Mechan 11 is a steel robot carrying a sack of discarded junk along State Street in Camden, part of A New View, a multi-site art installation highlighting the issue of illegal dumping. (Photo: Phaedra Trethan)

"If you think Camden is a dump, you'll think it's OK to dump trash here," she noted.

Camden for too long has been what Kolluri called "a sacrificed community," a place where industry, government and social services are centered without enough thought to the people who live there.

Now, with the Bloomberg Philanthropy grant and will millions in state, corporate and federal investments, including as much as $100 million going toward its parks and green spaces, "Camden is finally getting the investment it deserves."

Kids in Camden were exposed to art, to performances and outdoor activities they might have missed during the worst days of the pandemic — or before it.

"I grew up in Centerville and it wasn't until I was an adult that I grew to appreciate the value of green space in a city," Mitchell said. Visits to family in South Carolina and Woodstown showed her the beauty of nature, but also left her with the impression that trees, yards, green spaces were all for the wealthy, and not for her.

"Having something like this sparks inspiration," she said, and gives residents another reason to take pride in their neighborhood. Simple things like sweeping their walkways, sitting outside, utilizing parks and cleaning empty lots can translate into safer, more vibrant places. 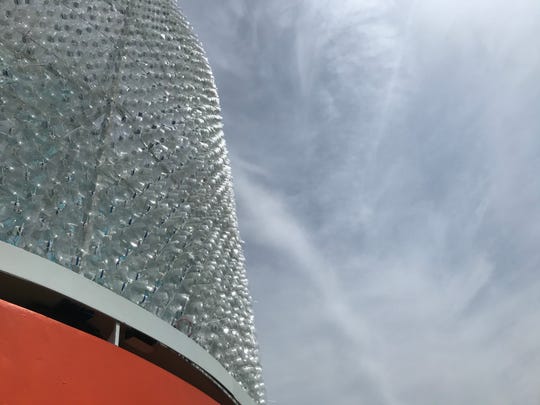 Turntable is an art installation made from plastic water bottles and medical face masks. It's part of A New View, a multi-site project to highlight the problem of illegal dumping in Camden. (Photo: Phaedra Trethan)

"It was always worn like a badge: You were successful when you were able to move out of Camden," she continued. "But we want people to enjoy their neighborhood, to create opportunities for them to stay and make sure their families stay here."

"What makes a community strong and sustainable?" Kolluri asked. "If you ask (Camden County Police Chief) Gabe Rodriguez, if you ask (schools superintendent) Katrina McCombs, if you ask (Mayor) Vic Carstarphen, they'll all say the same thing: that connective tissue, for the community to feel vested itself, to make sure it has strong roots and build on those roots."

A New View's Sunset Farewell will take place Sunday from 2 p.m. until sunset at Cooper Poynt Park on Delaware Avenue on the Camden Waterfront. There will be food trucks, live music, site tours, DIY art and a trunk-or-treat. Admission is free. For more information, visit www.anewviewcamden.com/

Phaedra Trethan has been a reporter and editor in South Jersey since 2007 and has covered Camden and surrounding areas since 2015, concentrating on issues relating to quality of life and social justice for the Courier-Post, Burlington County Times and The Daily Journal. She's called South Jersey home since 1971. Contact her with feedback, news tips or questions at ptrethan@gannettnj.com, on Twitter @By_Phaedra, or by phone at 856.486-2417.