NJ's largest health care union says the lack of PPE has exposed and sickened hundreds of its members during the coronavirus pandemic.

Valley Hospital workers are cheered as members of Ramsey Strong and participants do a drive-by parade at Valley Hospital in Ridgewood on Monday. NorthJersey.com

The massive shortage of personal protective equipment (PPE) remains, even as the state reopens and braces for a possible resurgence in cases, members of the Health Professionals and Allied Employees union said. At least six of the union’s members have died from the virus, and one in five of those who completed a recent survey were diagnosed with it.

“We know if we are not safe, neither are our patients,” said Debbie White, the union president, at a virtual news conference where she called upon New Jersey officials and health care institutions to prepare better for the next expected spike in COVID-19 cases this fall.

Even now, nurses, aides and others are forced to reuse single-use N95 masks — the type that filter out 95 percent of airborne particles — as they treat multiple patients, sometimes for a week or more, the union said. At some facilities, supplies of PPE are kept under lock and key. Replacements are rationed. Many employees resort to buying their own.

The union report, entitled “Exposed and At-Risk,” is based on a survey of 1,085 HPAE members at 26 hospitals, nursing homes and other facilities. More than half said they had been exposed to COVID-19 on the job, but only one in three learned of their exposure from their employer.

Of more than 200 union members who said they became sick with coronavirus complications, two-thirds said they did not have proper PPE when they provided care to a COVID patient. Three-quarters said they had to reuse their N95 masks, and nine-tenths said they never were taught how to decontaminate their PPE for reuse.

“We feel disposable,” White said she was told by the head of a union local during the first wave of the pandemic. Front-line workers “watched so much suffering and death.”

“They didn’t feel protected. There was constant anxiety as they wondered, ‘Am I going to bring this home to my family? Am I exposed? Am I going to come down with these symptoms?’” White said.

Are nurses ready?: Traumatized by the amount of death, some NJ nurses unsure they can face another COVID-19 wave

More: 'Coronavirus 2.0': NJ hospitals prepare for second surge as cases spike in rest of US

More: 'The financial strain … will be long-lasting': NJ hospitals reeling from coronavirus pandemic

Almost a quarter of the union members surveyed said they were forced to return to work, even with symptoms, before they had fully recovered — a demand that put their patients and coworkers at risk, White said. No government agency or employer tracked workplace exposures, illnesses or deaths.

Those workers who spoke out about their concerns feared retaliation. The head of the local at Jersey Shore University Medical Center said he was fired after taking a day off to defend a nurse in a disciplinary hearing who had complained about the lack of protective gear.

"At least six of our HPAE brothers and sisters have died from this disease, five of them people of color," White said. "Those are the ones we know of. We need transparency with the data — that's the bottom line."

Two state bills in the works could help if New Jersey faces a second wave of the pandemic. 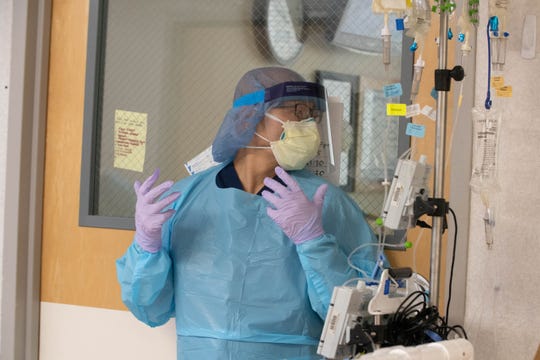 Senate President Stephen Sweeney and Sen. Linda Greenstein in May co-sponsored legislation that would create a presumption that COVID-19 infections contracted by essential employees, including health care workers, are work-related illnesses, making it easier for those employees to get workers' compensation if they become sick.

The bill would also prohibit employers from charging paid leave to employees who miss work because they are ill or were exposed, instead forcing employers to consider those absences as on-duty time.

If passed, the bill would be retroactive to March 9, when Gov. Phil Murphy declared a state of emergency due to the pandemic.

"It's critically important we do everything we can to take care of our nurses," Sweeney, D-Gloucester, said. "If we don't protect you, you can't protect us."

Greenstein, D-Middlesex, also sponsored a bill introduced in May that would require health care facilities to report to the state health department numbers of health care workers who test positive for and die from COVID-19, as well as those who are admitted for treatment.

The legislation would require the reported data to be compiled by health care facility type and by professional license or job title.

"I want to apologize to you that we were not more ready in this state," Greenstein said to union members during the virtual news conference. "We're going to be ready the next time. It's critical that we require reporting of this data." 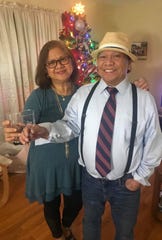 Susana, 68, and Alfredo Pabatao,64, of Palisades Park, are among those in New Jersey who contracted coronavirus and later died. The couple died four days apart. (Photo: Courtesy photo from Sheryl Pabatao)

During the news conference, New Jersey nurses with decades of experience painted pictures of frightening PPE shortages and overwhelmed colleagues.

Alice Barden, president of local HPAE union that represents nurses at Englewood Hospital, said she and her colleagues experienced more trauma during the first wave of the pandemic than most nurses experience in a lifetime.

"We are caregivers, and yet it felt like no one cared about us," Barden said. "Most of us suffer from post-traumatic stress. The conditions we had to work under forced us to experience moral injury daily for months on end."

Banita Herndon, vice president of the HPAE unit at University Hospital in Newark, said nurses relied on one another for emotional support as more and more patients, including some of their co-workers, came in sick.

"Many nurses and other health care members were developing fight or flight syndrome after seeing so many patients die," she said. "As things calm down, we reminisce on a daily basis how scared we were."

The HPAE report is dedicated to the memory of Nagi Abraham, a hematologist at University Hospital in Newark; Susan Cicala, a nurse at Northern State Prison in Newark; Maria Luisa Lopez, a nurse at CarePoint Bayonne Medical Center; Nancy Martell, a patient care technician at Hackensack Meridian Health Palisades Medical Center in North Bergen; Alfredo Pabatao, a transporter, also at Palisades; and George Cisnero, a nurse at University Hospital. Members of HPAE, the report said they contracted and died of COVID-19 while caring for patients stricken with the disease.

Lindy Washburn is a senior healthcare reporter for NorthJersey.com. To keep up-to-date about how changes in the medical world affect the health of you and your family, please subscribe or activate your digital account today.