Sen. Sandra B. Cunningham was arrested and charged after police say she struck two parked cars in Jersey City in March.

A lawyer for state Sen. Sandra B. Cunningham entered a not guilty plea on her behalf during a Thursday Municipal Court hearing on Cunningham's drunken-driving and careless-driving charges.

Police arrested and charged the senator after they said she struck two parked cars in Jersey City on March 4. Body camera footage of the arrest shows that Cunningham, 70, a Hudson County Democrat, said she was "unsteady" and that she was unable to complete a sobriety test.

The case was moved to Bergen County to avoid any conflicts of interest. The prosecutor is Linda Schwager, the Oakland mayor.

Cunningham was not present during Thursday’s hearing, which was brief. Schwager said she does not have any of the discovery materials, including the body camera footage.

“Apparently more people have discovery than I do,” she said, an apparent reference to the fact that NorthJersey.com and The Record obtained and published the footage last week.

Videos from the arrest show that Cunningham twice asked police whether Jersey City’s public safety director, James Shea, would come to the scene. Her attorney, Michael Rubas, did not respond to an email asking why Cunningham wanted Shea present.

Primary 2021: What to know about the candidates battling to succeed Sen. Weinberg

It’s not clear what kind of political repercussions, if any, Cunningham may face. She is up for reelection this year, but she has no Democratic challenger in next week’s primary and her Republican opponent faces an inhospitable climate in the 31st District, which includes Bayonne and parts of Jersey City. Democrats outnumber Republicans there 6-to-1. 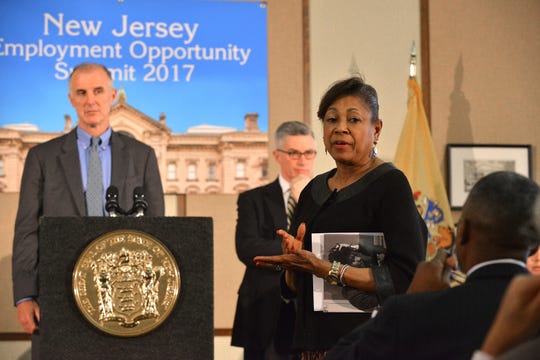 After a voting session on Thursday, Senate President Stephen Sweeney, D-Gloucester, said he believed Cunningham had "a health issue and she had a reaction to medication."

Asked if the arrest could prevent Cunningham from taking a legislative leadership position following the retirement of Sen. Loretta Weinberg next year, Sweeney said only that he hadn't yet picked successors.

"She takes on the issues that aren’t sexy, she takes on the tough ones," Sweeney said of Cunningham. "I’m standing with her and she’ll have her day in court. I believe in her.”

Micah Rasmussen, director of the Rebovich Institute for New Jersey Politics at Rider University, said a key difference between Cunningham’s case and similar episodes is that voters are really in control here.

“We've had gubernatorial appointees who became ensnared in their own ‘do you know who I am’ traffic stops, but in those cases, they served at the pleasure of the governor until they lost the support of their appointers,” he said.

Caren Turner resigned as a Port Authority of New York and New Jersey commissioner in 2018 after video footage showed her tirade against police officers who had stopped her daughter in Tenafly. Then-Attorney General Zulima Farber quit in 2006 after investigators questioned the ethics of her arriving in a state car to the scene of a traffic stop involving her companion.

Terrence T. McDonald is a reporter for NorthJersey.com. For unlimited access to the most important news from your local community, please subscribe or activate your digital account today.