The lawsuit alleges that the guards at women's prison Edna Mahan committed "one of the most barbaric examples of prisoner abuse" in state history.

FLEMINGTON – The first lawsuit has been filed by an Edna Mahan Correctional Facility inmate over injuries received in what the lawsuit calls "a premeditated raid that will go down in history as one of the most barbaric examples of prisoner abuse in the State of New Jersey."

Tatianna Harrison, 22, of Berlin, alleges in the suit filed Friday in Superior Court in Hunterdon County, that she was assaulted and injured by corrections officers in the Jan. 11 sweep of cells in the state's only women's prison.

Six inmates, all Black, were assaulted in the sweep, according to the lawsuit.

Ten corrections officers involved in the sweep – nine of whom are defendants in Harrison’s lawsuit – have been criminally charged by the New Jersey Office of the Attorney General, with charges ranging from assault to tampering with public records and official misconduct.

'These officers beat me up': Videos show alleged abuse inside NJ women's prison

The Jan. 11 charges were the latest in a series of criminal charges, including sexual assault, brought in recent years against guards at the facility plagued by corruption and abuse. The January incident also prompted Gov. Phil Murphy to call for the prison to close.

The attorney general's office  had no comment on the lawsuit. 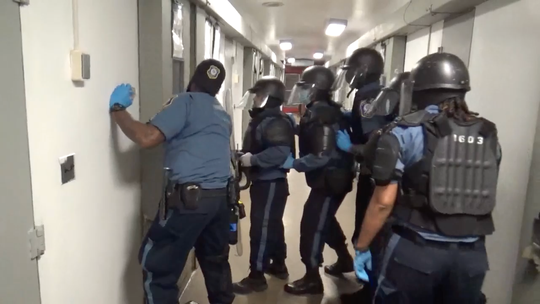 In the suit, Harrison, who is serving a 35-year sentence for a murder she committed at the age of 16 in Camden, alleges “approximately six to 10  officers stormed [her] cell, threw her to the ground and proceeded to repeatedly punch, kick and stomp on her head and body.”

The suit adds that Harrison "had a serious preexisting spinal injury … officers intentionally targeted her back while on officer knelt on her spine” while she was handcuffed.

Stile: We shouldn't forget the Edna Mahan fiasco as the governor's race begins

The officers also ripped her shirt open and pulled down her pants and underwear, exposing her groin and buttocks, the lawsuit charges.

Because she was unable to stand, the lawsuit contends, she was dragged out of her cell and brought to the prison's medical unit. While she was in the triage room, an administrator warned her "that his guards would beat her up every night until the incarcerated women showed them sufficient respect," the lawsuit says.

When Harrison was returned to her cell, according to the lawsuit, her belongings were strewn across the hallway, her hearing aids were missing, and her cell was covered in blood and pepper spray.

Her hearing aids were not returned  until March 8, according to the lawsuit

Because her window did not close and she had no change of clothes or blankets, "she spent the rest of the night freezing and in severe pain, with her asthma flaring from the cold and pepper spray," the lawsuit says.

The lawsuit says Harrison's injuries from the incident are "real and lasting" and that she was denied proper care for her injuries, including a concussion and visual impairment.

“The force used against Ms. Harrison is inexcusable,” said Adam Strychaluk, an attorney at the Manhattan law firm of Kaufman Lieb Lebowitz & Frick who represents Harrison. “She was not engaging in behavior that could justify any use of force, let alone a severe beating by a half-dozen officers. She was resting in her bed at night, preparing to sleep, when officers stormed her cell, handcuffed her and beat her to the point she could no longer stand.”

The lawsuit also argues that the Jan. 11 incident was not "isolated," but "the inevitable culmination of an unchecked system of institutional abuse and violence that has raged at (Edna Mahan) for decades."

Mike Deak is a reporter for mycentraljersey.com. To get unlimited access to his articles on Somerset and Hunterdon counties, please subscribe or activate your digital account today.