Michigan extremists plotted to kidnap Gov. Whitmer, start civil war. Here's why the state is a 'hotbed' for similar groups

Michigan has had a long history of armed groups similar to the Wolverine Watchmen. The group is accused of plotting to kidnap Gov. Gretchen Whitmer.

Michigan extremists plotted to kidnap Gov. Whitmer, start civil war. Here's why the state is a 'hotbed' for similar groups

DETROIT — The Wolverine Watchmen, the Michigan group accused of plotting to kidnap Michigan Gov. Gretchen Whitmer and others, is one of an estimated two to three dozen armed Michigan groups that some fear could pose a growing threat.

Michigan has had a long history of groups of armed men and women, which are active in every state, according to Amy Cooter, a senior lecturer at Vanderbilt University, who has studied them for more than a dozen years. Modern armed groups, she said, date to the early 1990s as a response to perceived fears of tyrannical government.

The state "has always been a hotbed for militia activity," with a strong presence ever since the early 1990s, Cooter said. "The militias in Michigan have always been the kind to which other states' militias look up to."

Thursday, law enforcement arrested 13 people, including seven members of the Wolverine Watchmen, which sparked a national conversation about domestic terrorism and the purpose of these private, loosely organized and armed organizations.

The extensive investigation, court documents showed, relied on confidential informants, undercover agents, recorded conversations, text messages and social media. Federal agents detailed a plan to violently overthrow the government, which included a conspiracy to kidnap the Democratic governor, take her to Wisconsin and put her on trial for "treason."

Authorities said the men's alleged plot was part of a broader mission to instigate a civil war, and the FBI and Michigan's attorney general outlined felony domestic terrorism charges against the group's organizers.

The conspirators, the documents said, were frustrated and upset about many things, including the fact that during the pandemic, the state was controlling the opening of gyms. They called Whitmer a "tyrant" and sought to train and recruit others into their ranks.

Michigan Attorney General Dana Nessel took aim at the Wolverine Watchmen, saying there has been a "disturbing increase in anti-government rhetoric" and she condemned the reemergence of groups that embrace "extremist ideologies" and seek to seize on civil unrest to promote armed resistance.

More than a dozen people, investigators said, met in Dublin, Ohio, and sought to form "a society that followed the U.S. Bill of Rights and where they could be self-sufficient." They discussed peaceful — and violent — ways to do this.

Who is facing charges? These 13 men were charged with conspiring to kidnap Whitmer

State governments, they believed, were violating the U.S. Constitution. They singled out Michigan and Whitmer. They talked about "murdering 'tyrants' or 'taking' a sitting governor." They planned to recruit others and spread their message.

Then, they met up with members of an armed group, which took the conversations to another level.

The Wolverine Watchmen was founded by Pete Musico, 42, and Joseph Morrison, 26, who lived together in Munith, Michigan, and are now each charged — among others — with a threat of terrorism, gang membership, providing material support for terrorist acts, and possession of a firearm in the commission of a felony.

Throughout the summer, law enforcement said, the combined group decided they needed firearms and tactical training and homemade bombs to blow up police vehicles and 200 men to storm the Capitol and take hostages. They also discussed a shooting at the governor’s vacation home.

Some news reports Thursday referred to the group as the "Michigan Militia," which, according to Cooter, attempted to unite several separate groups in the state under one name in the 1990s. That group was founded by Norman Olson of Alanson to resist perceived encroachment of constitutional rights.

But in recent years, Cooter said, Michigan Militia has become a term for all similar groups in the state.

For the most part, she said, the groups are united in their ideology, and that, in part, is why Michigan has been a place where they have thrived: a rural population, combined with beliefs attributed to individual freedom and self-reliance.

The armed groups, she said, tend to support Second Amendment rights, limited government and a strict — or literal — interpretation of the Constitution. They tend to be somewhat secretive, inwardly focused, and not much of a threat.

Modern armed groups, Cooter said, came into being in the early 1990s after sieges and standoffs that included a shootout at Ruby Ridge, in Boundary County, Idaho, in 1992, and in Waco, Texas, where the religious sect, the Branch Davidians, was based.

Most of the groups, Cooter added, are law-abiding.

But with the convergence of several trends — the rise of social media, increased collaboration with white supremacy and conspiracy groups, and fears that the presidential election may not be legitimate — Cooter said she fears some armed groups are becoming more violent and dangerous.

In court documents, one of the men who were charged, Adam Fox, talked about sending a bomb to the governor, saying "I just wanna make the world glow, dude," "we’re just gonna conquer" everything, and it will all "have to be annihilated."

Cooter said she also worries that President Donald Trump may be stoking fears about the election and the more violent groups are feeding off that. Armed groups, which mostly have been focused on constitutional rights, also may be opening their doors to groups with racial agendas.

Cooter also cited the rise of QAnon, a cult-like far-right conspiracy theory that holds a cabal of Satan-worshiping pedophiles are running a global child sex-trafficking ring and plotting against Trump.

The spread of QAnon: How QAnon and other dark forces are radicalizing Americans as the COVID-19 pandemic rages and election looms

Thursday's case was the second major case tied to an armed group brought by the federal government in Michigan in a decade.

The last one ended as a major embarrassment for the government when all the defendants, some who had been jailed for years, were vindicated. Seven Hutaree members were charged in 2009 with plotting a revolt that included killing police officers with guns and bombs.

All faced up to life in prison, but their trial ended abruptly in 2012 when U.S. District Judge Victoria Roberts concluded that the government failed to prove its case. In the end, the judge said, there was no proof of a real plot to overthrow the government or kill police, only people engaging in unsavory talk. 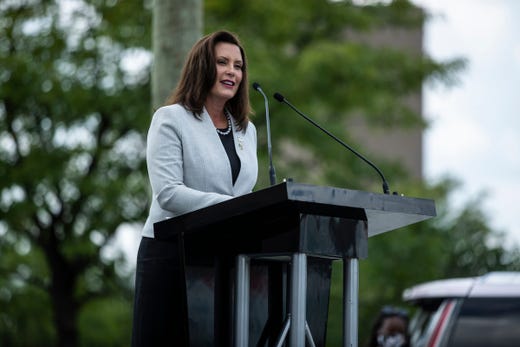 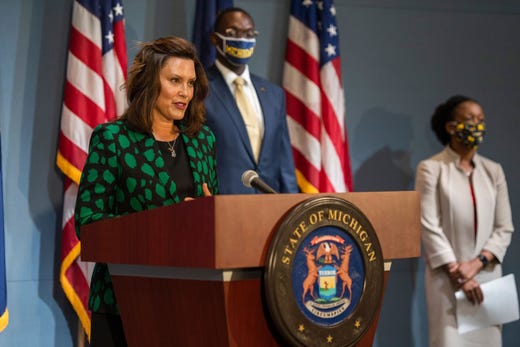 Governor Gretchen Whitmer during a news conference in Lansing on Wednesday, July 15, 2020. State of Michigan
Fullscreen 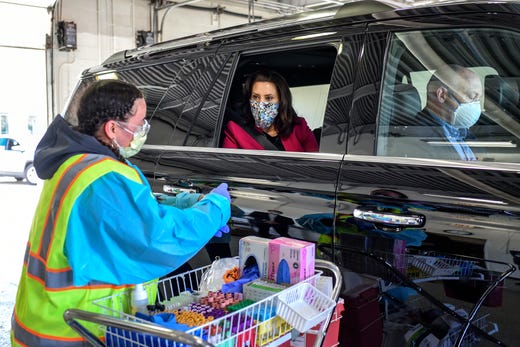 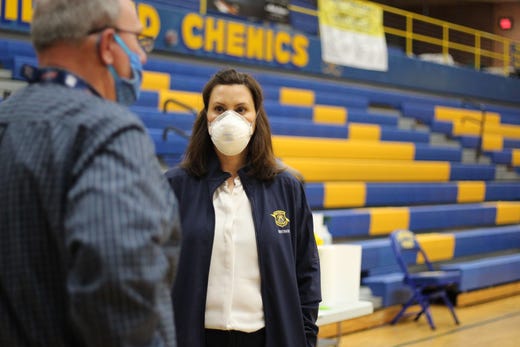 Governor Gretchen Whitmer surveys the shelter area set up at Midland High School after flooding and a dam breach in Midland County on Wednesday, May 20, 2020. State of Michigan
Fullscreen 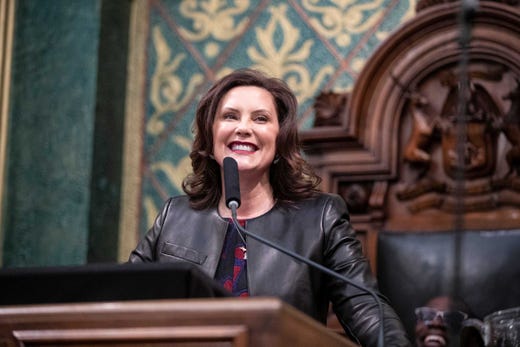 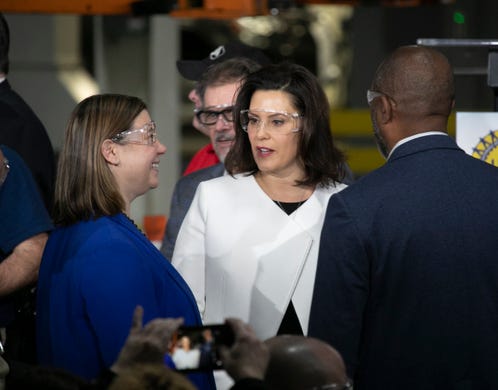 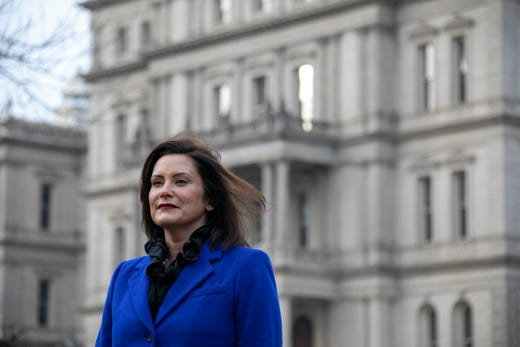 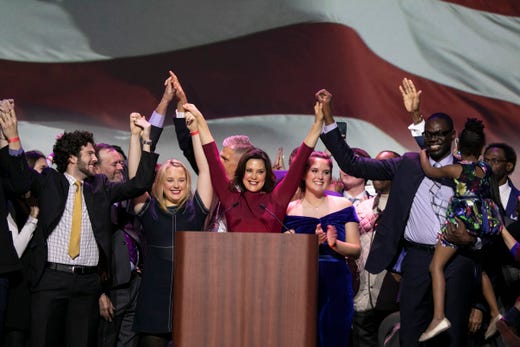 Gretchen Whitmer and her running mate Garlin Gilchrist celebrate their victory during the watch party held at the Sound Board in the MotorCity Casino in Detroit Tuesday, Nov. 6, 2018. Mandi Wright, Detroit Free Press
Fullscreen 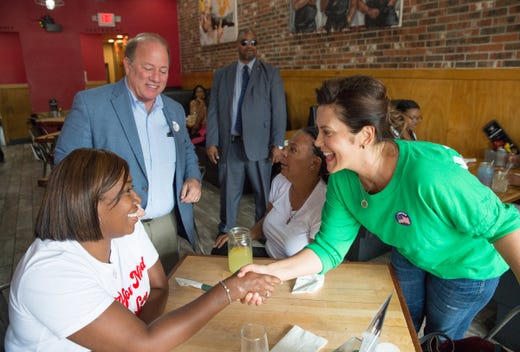 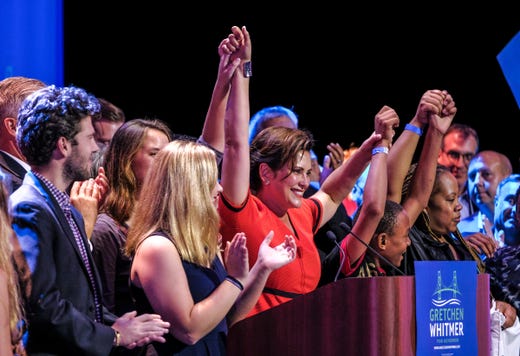 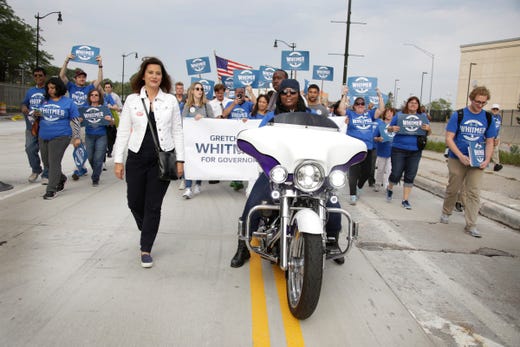