While bankers expressed skepticism, other gubernatorial candidates pounced on a unique plan by a former Wall Street exec 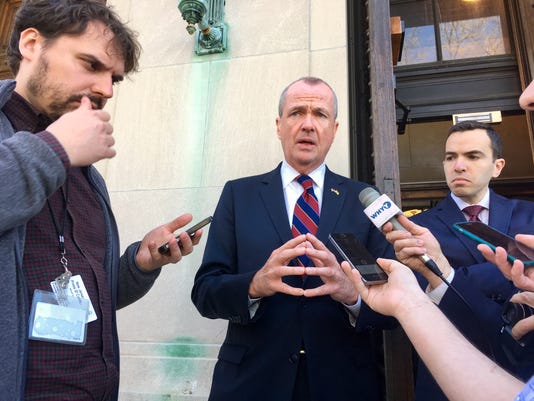 Phil Murphy, the leading Democratic candidate for governor who spent two decades on Wall Street, opened a Tuesday forum hosted by the state's banking industry outlining a plan that has yet to be duplicated in the United States: a state-run bank focused on investing tax dollars in small businesses, student loans and infrastructure projects.

But the plan had little currency in the room full of bankers, and Murphy's opponents to become the next governor spent the next several hours in front of the New Jersey Bankers Association tearing down the idea as "wacky" and a risk to taxpayers without having any effect on ingrained financial challenges like school funding and property taxes.

For Murphy, the 20-minute appearance was more of a sell of his public bank plan than it was of his candidacy. He spent more than half the time rattling off data on small business loans, state holdings and dwindling community banks while trying to calm concerns that a state-run bank would compete with other financial institutions and cut into their profits.

Murphy insisted that a state bank is not just the type of economic driver New Jersey needs right now, but represents the sort of "big thinking" that harks back to a time when New Jersey thrived on the cutting edge of technology and innovation.

"I can look back at periods in this state under the leadership of both or either party, when we were both fiscally responsible, proudly progressive and we dreamt and took chances and took risks and embraced big ideas," Murphy said.  "If we believe in our future, let's put our money where our mouth is. Let's again think deeply and do more," he added.

Murphy is embracing a one-of-a-kind idea. Just one state, North Dakota, has a public bank, though many others have studied and considered it.

To Murphy, who retired as an executive at Goldman Sachs, the "elegance" of a state bank is its simplicity. The bank would be owned by taxpayers and invest revenue in the state. There would be no ATMs, no branch offices, no drive-throughs. The state bank would give greater financial access to qualified residents and businesses who are currently shut out while also helping rejuvenate a fading community banking sector. And it would all be done without disrupting banks' current business, Murphy said.

"It is to be a partner with you, to move the capital through you to fulfill the demands of your small-business customers and your communities," he said.

The state holds nearly $12 billion in a cash management fund, Murphy said, but at least several billion of that is invested in financial institutions with no obligations or incentives to invest in New Jersey. The state bank would offer low-interest loans and the returns would come back to the state, he said.

"This is money that belongs to the taxpayers of New Jersey, so it should be invested in them," he said.

But that simple idea comes with complex details and challenges that have kept other states from opening their own public banks. More than a dozen states in recent years have studied public banks to increase revenues, according to the National Conference of State Legislatures, but none has followed North Dakota, which opened its bank in 1919.

Although Murphy pitched the state bank as a partner, he didn't convince the association, which is made up by a broad range of members from the Bogota Savings Bank to Wells Fargo. Michael Affuso, the association's director of government relations, said that while Murphy "put a little bit of meat on the bones" of his plan, the industry remains skeptical. He said the association would keep an open mind.

"We'll see, but right now we're terrifically concerned that a state bank will remove liquidity from community banks where they're actually lending money in communities," he said. "The days of 'this is a solution and this is going to be the panacea to all who ills us,' I think people are a little jaundiced about that."

Murphy's opponents were less diplomatic in front of an audience already down on the idea.

"Let's talk for a second about that wacky bank," said Republican Lt. Gov. Kim Guadagno, drawing chuckles. She said that a state bank would not be federally insured, either. "Take out your pocketbooks, because the taxpayers of New Jersey would be insuring the bank," Guadagno said.

Assemblyman John Wisniewski, D-Middlesex, questioned where the state would get startup capital for a public bank. New Jersey's resources, he said, "are clearly already occupied." North Dakota also underwrites its bank with oil and gas revenue, he said - scarce resources in New Jersey.

And Wisniewski pointed to the state's history of under-funding education, transportation and the public employee pension system - not to mention its notoriety for public corruption - as cautionary examples that should give the public pause about a state-run bank.

"The notion that we will break from tradition, suddenly have no political input into this and run a bank better than we've run anything else defies reason and it defies logic," Wisniewski said.

Assemblyman Jack Ciattarelli, R-Somerset, said that he doesn't want to "poo-poo ideas out of the box" but doesn't favor Murphy's plan based on his own studies of the idea. He said North Dakota's returns are "not great," and there is a reason why other states haven't duplicated its public bank model in the century since it opened.

"A bank of New Jersey is not going to solve our school-funding crisis, our property tax crises or our tax code crisis," he said.