The Senate appeared unable to muster the votes Monday evening, as protesters chanted and stamped their feet outside the hearing room.

Opponents of a bill that would eliminate religious exemptions for childhood vaccines gather outside the New Jersey statehouse on Dec. 16, 2019. NorthJersey.com

Lawmakers pulled back from a vote Monday night that would have allowed New Jersey children to avoid vaccines only when it was medically necessary, as hundreds of opponents, who had pounded the windows and chanted their disapproval for hours, cheered in victory.

"Power to the people," the protesters yelled as the Senate adjourned at 8:15 p.m. without taking a vote on the measure to end religious exemptions for childhood vaccines.

Democratic leaders said they were not giving up. The bill will be considered in January, said state Senate President Steve Sweeney. “They can cheer all they want, but we’re not walking away from it," he said.

"We were short a little bit, but we’ll get there," said Sen. Joseph Vitale, D-Woodbridge, one of the bill's sponsors.

“We have a responsibility to protect the public’s health, especially children who could be exposed to infections," said a statement from the bill's co-sponsors, Vitale and Sen. Loretta Weinberg, D-Teaneck. "This is about keeping our future generations safe and healthy. Our personal health choices are not made in a vacuum. The decision to refuse vaccinations can have a real and immediate impact on the safety of others."

The measure had passed the Assembly earlier in the day by a vote of 45 to 25 with six abstentions. For procedural reasons, the bill must pass the Senate and go back to the Assembly in order to send the bill to Gov. Phil Murphy.

If it ultimately becomes law, New Jersey would become the sixth state to allow only medical exemptions to required immunizations.

Protesters in the gallery against the vaccine bill shouted "We will not comply" and "Shame" as the lawmakers moved on to a debate on a measure to allow undocumented immigrants to apply for driver's licenses.

Hundreds who had gathered outside the Senate chamber, meanwhile, drowned out senators as they debated a marijuana ballot measure. The crowd thundered "In God we trust" over and over again as some stamped their feet.

Nearly 14,000 schoolchildren in New Jersey currently are exempted for religious reasons from the required immunizations for measles, mumps, rubella, chickenpox, diphtheria, tetanus, whooping cough and polio, among other diseases.

Another 1,137 children have medical exemptions from vaccination, due to conditions that compromise their immune systems.

Under current law, parents who don't want their children to be vaccinated can write a letter declaring that they oppose immunization on religious grounds. As the number of exempted children has multiplied — and communicable disease cases have increased — public health advocates say the exemption is overused and have urged lawmakers to tighten the rules.

Opponents say they trust God — and not vaccine manufacturers or lawmakers — to protect them from disease. Elimination of the religious exemption will compel them to take their children out of school or leave the state, they said.

Story continues below the gallery 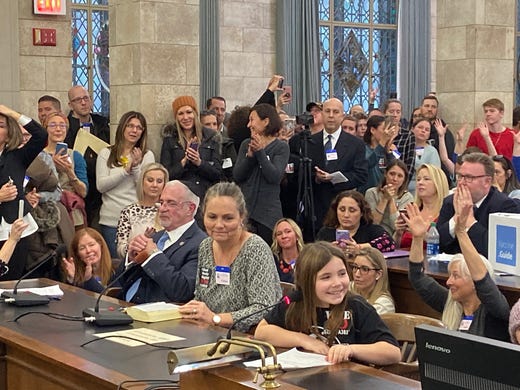 Second grader Emelia Walls, 7 (front row, right), testified at a hearing before the Senate Health committee about a measure that would make it harder to get an exemption from mandated vaccines. She opposed the bill. Ashley Balcerzak
Fullscreen 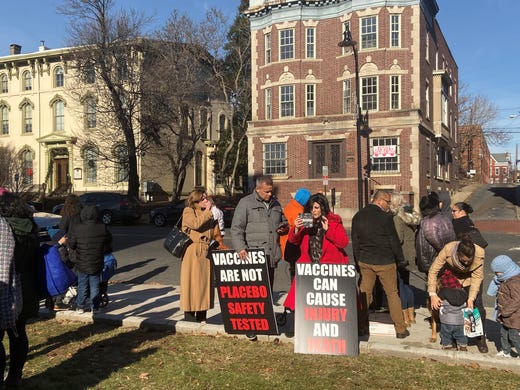 Hundreds of people wind around the Trenton Statehouse more than an hour early for a hearing that considers tightening New Jersey’s immunization rules. Ashley Balcerzak
Fullscreen 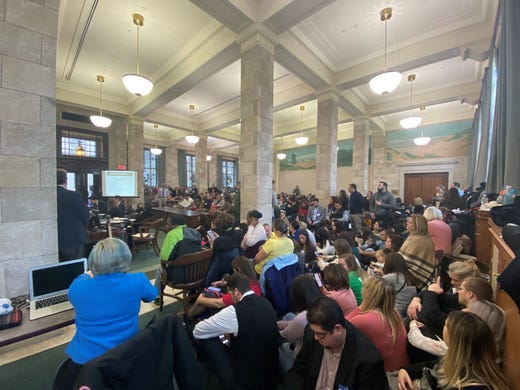 Hundreds pack a Trenton Statehouse committee room hours before a hearing about eliminating religious exemptions for immunizations. All seats are taken so hundreds of people sit on the floor, shoulder to shoulder, unable to move without touching the person next to them. Ashley Balcerzak
Fullscreen 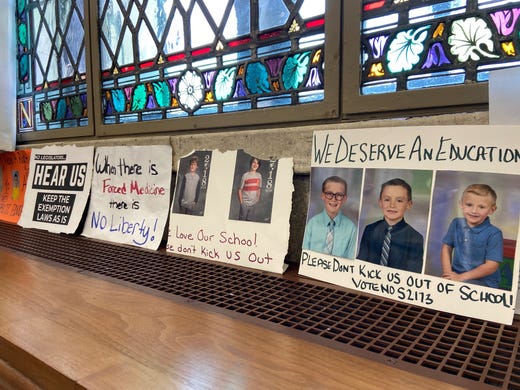 Hundreds gathered at the Trenton Statehouse on Dec. 12, 2019 to oppose a measure that would eliminate religious exemptions from mandated vaccines. These are some of their signs. Under the bill, children who are unvaccinated could be excluded from school. Ashley Balcerzak
Fullscreen

A packed committee room at the Trenton statehouse waits for the Senate Health Human Services and Senior Citizens committee to hear a bill to end religious exemptions for immunizations. Ashley Balcerzak
Fullscreen 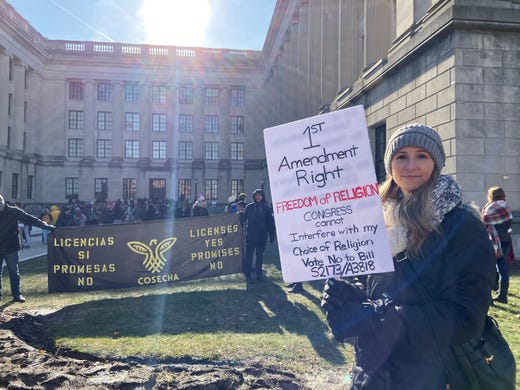 Christine Beaudry, 39, is one of hundreds waiting outside the statehouse to protest the immunization bill, as others gather to speak on allowing undocumented people to apply for drivers licenses. The mother of three said she is a Presbyterian who does not want to vaccinate her children because “the vaccines carry aborted fetus cells and we stand for human rights.” Ashley Balcerzak
Fullscreen 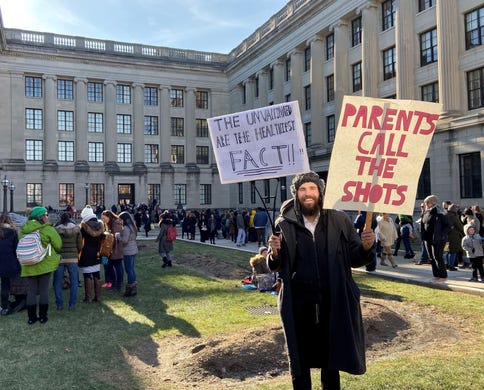 Crowds gather at the Trenton Statehouse on Dec. 12, 2019 to oppose a measure that would get rid of religious exemptions from required childhood vaccines. “I shouldn’t have to cut off my hand to keep you safe," said Alter Eliezer Richter. Ashley Balcerzak
Fullscreen

Measles cases in the United States soared to a record this year, with 1,276 cases in 31 states since Jan. 1, the most since 1992. The outbreak was driven in large part by cases in Brooklyn and Rockland County, New York, where 312 were diagnosed. New Jersey recorded 19 cases.

The Assembly vote Monday followed a rancorous hearing last week, when hundreds of advocates opposed to ending the religious exemption waited for hours and then packed a committee room to express their opposition to the bill. 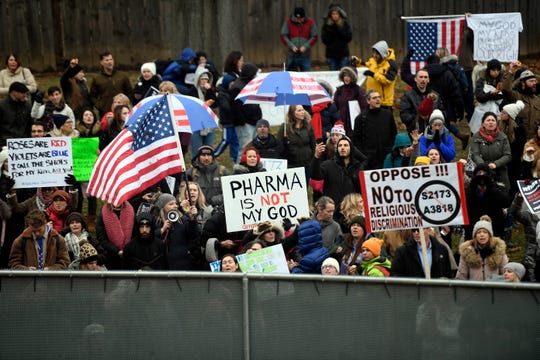 Anti-vaccination protesters stand outside of the New Jersey State House as the Assembly passes a bill to limit vaccine religious exemptions on Monday, Dec. 16, 2019, in Trenton. (Photo: Danielle Parhizkaran/NorthJersey.com)

Hundreds of protesters returned Monday, gathering outside the Statehouse and in the gallery. Outside, they shouted and held up signs that said “Pharma is not my God” and “Vaccine makers are exempt from liabilities.” They clutched American flag umbrellas, and one held up the American flag upside down. One woman held up a binder that read "My Body, My Choice."

On the Assembly floor, Assemblyman Herb Conaway, a Delran Democrat, introduced the measure, noting that vaccine-preventable diseases have returned to sicken children “because of junk science propagated across the internet and paranoia about the validity of vaccines.” 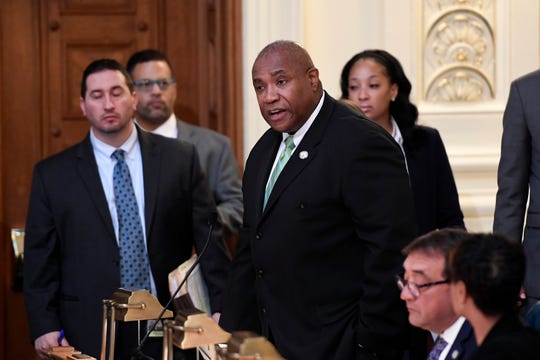 Assemblyman Herb Conaway speaks before the Assembly votes to pass the bill that will limit religious vaccine restrictions at the New Jersey State House on Monday, Dec. 16, 2019, in Trenton. (Photo: Danielle Parhizkaran/NorthJersey.com)

"States have a compelling interest in preventing disease and death," said Conaway, who is a practicing physician and chairman of the Assembly Health Committee. That interest outweighs nearly every other government interest, including education and religious liberty, he said. “I encourage you to join me to make sure no family or individual suffers the loss that might have been prevented,” he added.

In 2017, an unvaccinated 6-year-old child in Oregon developed tetanus after a fall and was hospitalized for eight weeks, spending many days on a ventilator and being fed intravenously. He then spent 17 days in rehabilitation before resuming normal activities. The cost of his hospital in-patient care exceeded $800,000, the CDC reported earlier this year. A single dose of tetanus vaccine costs about $30, with the full series requiring five doses.

Assemblywoman Mila Jasey, D-Maplewood, who described herself as a mother, grandmother and former public health nurse, said the state has the right and responsibility "to take all actions necessary to protect the health, welfare and safety of its students.”

Cemeteries have many headstones from the 1930s through 1950s for children who died of diseases that today can be prevented with vaccines, including polio, whooping cough and smallpox, she said.

Other lawmakers spoke against the bill, including Assemblyman Jon Bramnick, R-Westfield, who criticized the way the measure tightens medical exemptions.

Under the bill, a physician or advanced practice nurse who gives a medical exemption must use a form from the state Department of Health, and a physician employed by or contracted with the county health department must approve the exemption.

This will have a "chilling effect on the doctor that wants to make a decision but surely does not want to deal with a bureaucratic system that has to review his decision," Bramnick said.

Assemblywoman Holly Schepisi, a Westwood Republican who is a vice president of development at a hospital, voted against the measure. Two Democrats, Assemblymen Gary S. Schaer of Passaic and Jamel C. Holley of Union, also voted against it. Six Democrats abstained, including C. Christopher Tully of Paramus.

This story has been updated to reflect that the amended bill does not require parents to give a reason for not vaccinating their child when sending them to a private school.

Ashley Balcerzak is a reporter in the New Jersey Statehouse. Lindy Washburn is a senior healthcare reporter for NorthJersey.com. To keep up-to-date with New Jersey's legislature and how changes in the medical world affect the health of you and your family, please subscribe or activate your digital account today.

Follow our state house team on Facebook for the latest news from Trenton, Gov. Phil Murphy and New Jersey legislation.
CONNECTTWEETLINKEDINCOMMENTEMAILMORE
Read or Share this story: https://www.northjersey.com/story/news/new-jersey/2019/12/16/assembly-passes-bill-limit-vaccine-religious-exemptions/2663862001/
Share your feedback to help improve our site experience!