Since he was a candidate for governor, Phil Murphy promised to raise taxes on millionaires. The coronavirus pandemic helped him finally get it.

Gov. Murphy briefs press on a deal to tax New Jersey millionaires at a higher rate while giving tax rebates to the middle class. NorthJersey.com

Millionaires in New Jersey will most likely pay more in taxes next year after Gov. Phil Murphy and Democratic leaders reached an agreement to raise rates amid declining revenues in the COVID-19 pandemic.

As part of the deal, announced Thursday morning in Trenton, the state will give $500 rebates to low- and middle-income families in an effort to help households struggling in the economic crisis — at a time when Murphy and lawmakers are expected to be running for reelection. He said the rebates aren't expected until next summer, before the November 2021 election.

"At this unprecedented time, when so many middle class families and others have sacrificed so much, now is the time to ensure that the wealthiest among us are also called to sacrifice," Murphy said at a news conference. He added that "it will allow us to undo years of tax inequities."

The agreement will put pressure on Gov. Andrew Cuomo in New York to also consider raising taxes to close a $13 billion budget hole this year. But so far, Cuomo has resisted calls from fellow Democrats to raise taxes on the wealthy, saying it could hurt the state's economy and wouldn't come close to enough new revenue to address the state's weakened finances. 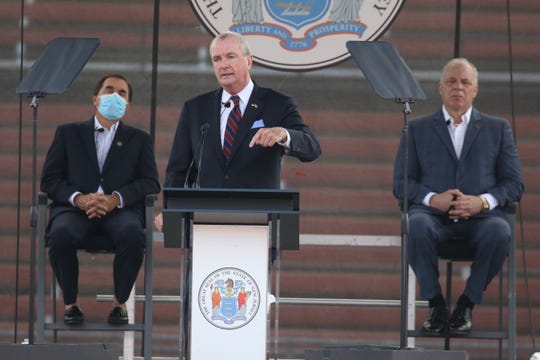 Gov. Phil Murphy addresses members of the New Jersey Legislature in SHI Stadium at Rutgers University in Piscataway on Aug. 25, when he announced his budget. (Photo: Chris Pedota/NorthJersey.com)

Beyond raising more revenue for the state, the agreement in New Jersey represents a major, long-awaited victory for Murphy, who made the so-called millionaires tax a central campaign pledge in his self-described quest to make the state "stronger and fairer." And that seemed assured when he won election in 2017. But Senate President Stephen Sweeney, D-Gloucester, and Assembly Speaker Craig Couglin, D-Middlesex, abruptly dropped their support of the tax once Murphy took office.

Murphy tried in each of his budgets to pass the millionaires tax for the first time since Jon Corzine was governor a decade ago, but each time he was blocked by the legislative leaders. They did, however, compromise to raise the top rate on incomes over $5 million in 2018.

For subscribers: American Dream mall to reopen in October. What we know, including the tenant it just lost

NJ budget: Gov. Murphy reveals $32.4B NJ budget. Here's what's in it and which taxes are going up

The pandemic changed Sweeney's thinking on the tax and when Coughlin approached him with the idea to use the revenue for rebates, he was sold.

"We have to face the reality that a lot of families are hurting here," Sweeney said. "Healthy middle-class families, to me, makes all the sense in the world at this time."

The rebates are expected to cost $335 million, said Melinda Caliendo, a Treasury spokeswoman. They will benefit about 800,000 families and have to be renegotiated each year, Murphy said. Single parents earning up to $75,000 a year and married couples earning up to $150,000 will be eligible for the rebate up to a maximum of $500, Murphy said, but he did not say how the rebates will be structured and what factors could go into a household receiving less than the maximum.

Republicans and business groups panned the deal as they have each time the proposal has come up. The New Jersey Business and Industry Association called it a "gimmick" that doesn't address the state's "affordability crisis or remove us from the edge of our fiscal cliff."

Lawmakers are still combing through Murphy's proposed budget for next year, but they have already agreed with his plan to borrow about $4 billion to make up for losses in the pandemic. They are also considering other tax increases on corporations, cigarettes and opioids.

"Let's be clear, these newest tax schemes will land in the same place every other Democratic tax scheme lands: in the pockets of New Jersey’s middle class," Republican Party Chairman Doug Steinhardt said in a statement. "At a time when Trenton should practice restraint and find creative ways to spend less so you can save more, they don’t, can’t and won’t. NJGOP will continue the fight for leadership that will have the government give back to the people when times are tough, not ask even more of our overburdened citizens.”

Assemblyman Jon Bramnick, the chamber's minority leader, said: “Governor Murphy’s plan to raise taxes is a gift for the Florida economy and a nightmare for New Jersey. Passing another ill-conceived tax will make out-migration worse and shift the tax burden onto the middle class when others leave.”

The story continues below the video.

Critics have said the raised tax rate would prompt high-income residents to flee the state, though there has not been evidence of that in Treasury Department records. Since 2004, when then-Gov. Jim McGreevey raised the top rate from 6.37% to 8.97%, the number of tax returns with income over $1 million has more than doubled, the department said last year.

Republicans also criticized the politics of the agreement and gave Cuomo credit for resisting a similar increase in New York.

"Governor Murphy is looking to play Santa Claus with taxpayer money as he heads into his reelection next year. It’s an election year stunt, plain and simple," Sen. Michael Testa, R-Cumberland, said in a statement. "That’s why hundreds of millions of dollars in higher taxes will be collected over the next fiscal year, but none of the benefits the governor is promising will be paid out until he’s in campaign mode next summer. He’s looking to buy his reelection with your money.”

If passed as expected, more non-residents would pay the tax, Murphy has said.

New Jersey Policy Perspective, a progressive think-tank that has advocated for years for the millionaires tax, celebrated the agreement as "both smart and just policy, especially now during an economic downturn that has disproportionately harmed low-paid workers and communities of color."

“While many states across the country are balancing their budgets with steep spending cuts, New Jersey’s legislative leaders made the right choice in rejecting austerity measures like those made in response to the Great Recession," its president, Brandon McKoy, said in a statement. "This deal recognizes the importance of maintaining state investments that grow our economy and protect families harmed during the pandemic."

Dustin Racioppi is a reporter in the New Jersey Statehouse. For unlimited access to his work covering New Jersey’s governor and political power structure, please subscribe or activate your digital account today.