Governor Murphy offered a mostly retrospective look in his annual speech, but asked for gun reforms and pledged to address prescription drug prices.

Gov. Phil Murphy pledged Tuesday to tackle health care costs and prescription drug prices in the next year and urged lawmakers — again — to send him gun safety reforms as he enters his second term.

In his annual State of the State address, Murphy offered a mostly retrospective look at achievements over his first four years, such as raising the minimum wage to $15 an hour, investing heavily in public education and overseeing slow growth in property tax rates.

But he also touched on New Jersey's economic future. He recommitted to not raising more taxes and said "we will continue our work taking on" property taxes, routinely ranked as the top issue for residents. 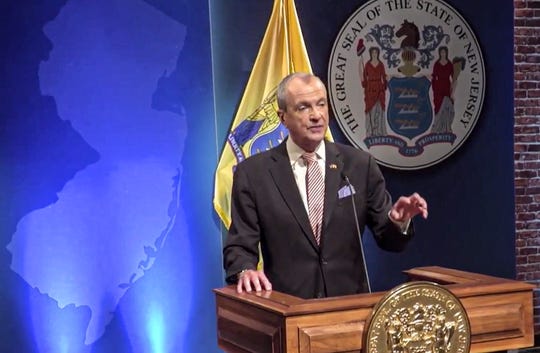 "Our task now is to take the next giant leap forward — to turn the positive changes we’ve made in our laws into long-lasting and tangible progress for our working families and seniors," he said in a pre-recorded, roughly 40-minute speech.

Murphy delivered his speech shortly after re-declaring a public health emergency in the COVID-19 crisis, primarily to extend his mask mandate in schools and day care centers.

"Just as we thought we had finally gotten ahead of COVID, the omicron variant came along," he said, noting that new cases "dwarf anything we’d seen to this point." The number of hospitalized people with COVID-19 in New Jersey has increased by 28% since Jan. 2, but patients have been improving faster during this wave, which is largely driven by the omicron variant.

Here are some other highlights from Murphy's speech:

Murphy said he will send the Legislature a plan to address prescription-drug price affordability, something that's stalled in Washington, D.C. The effort will focus on transparency in the supply chain "so we can see what drives drug prices higher, and so we can lower them," Murphy said.

He also said his administration "will continue to directly take on increasing costs" of health care, but did not say how he would do that. That effort has already started, he said, through a "Health Care Cost Growth Benchmark Program" launched last month that's designed to "provide everyone in the state with a shared understanding of how much health care costs are growing and factors contributing to high costs and cost growth."

More than a dozen health insurers, providers and advocacy groups are part of that compact.

Having failed to see his third round of gun safety legislation pass, Murphy asked again for lawmakers to send him the "common sense and comprehensive" bills he proposed last April.

Some of those measures advanced in the Assembly but were blocked by Senate President Stephen Sweeney, whose final day in office was Tuesday. He had opposed the measures because, he said last month, "not one of these bills is going to do anything" about violent crime.

But Murphy said "we cannot go another year" without the legislation. It wasn't immediately clear how the new Senate president, Nick Scutari, views the gun package.

“Recommitting ourselves to lifting up our working middle-class families, making New Jersey more affordable, and ensuring access to opportunity, we stand ready to advance an agenda that puts emphasis on the daily challenges people in our state are facing," he said.

Murphy recommitted to not raising new taxes, as he did during last year's gubernatorial campaign. And affordability, particularly on property taxes, will be a priority, he said.

His increased funding for schools has helped slow the growth of property tax rates in recent years, but Murphy acknowledged it would take much more to flatten increases or even see declines.

He offered an olive branch to Republicans to achieve his goals, saying people are tired of hyper-partisanship, inaction and "the endless finger-pointing we see in Washington."

"From today forward, for all of us, the politicking ends and the governing begins. That’s true patriotism," Murphy said.

Murphy's pursuit of affordability aligns with Republicans' plans for the next two-year legislative session, which began Tuesday. But the party sounded more defiant than cooperative in announcing its priorities.

"After four years of inaction, we’re going to hold Governor Murphy’s feet to the fire now that he says he’s finally ready to listen to New Jerseyans and work on cost-of-living concerns," Republican leaders said in a statement.

On taxes and affordability, the New Jersey Business and Industry Association said that while Murphy has made some efforts to help businesses, it would like to see a comprehensive plan on that and structural reforms that will lead to property tax relief.

“We have the highest corporate tax rate and highest property taxes in the nation. Our income tax rates are among the highest, as well," Michele Siekerka, the lobbying group's president and chief executive officer, said in a statement.

"This is a unique opportunity for our state to provide tax relief across the board so residents have more money in their pockets, so startups can launch here and so corporations can grow here," she said.

Dustin Racioppi is a reporter in the New Jersey Statehouse. For unlimited access to his work covering New Jersey’s governor and political power structure, please subscribe or activate your digital account today.