Plans are back on to beam twin columns of light into the Manhattan sky to represent the World Trade Center during next month's anniversary of the 9/11 terror attacks.

A view from Hudson County at New York City's 9/11 Tribute in Light on Tuesday night. NorthJersey.com

NEW YORK — Plans are back on to beam twin columns of light into the Manhattan sky to represent the World Trade Center during next month's anniversary of the 9/11 terror attacks.

The Tunnel to Towers Foundation announced Friday that it is working on plans to shine the twin beams during its alternative 9/11 ceremony. The move comes a day after the National September 11 Memorial & Museum, which organizes the main annual tribute at the trade center site, canceled the light display over concerns about work crews during the coronavirus pandemic.

"The twin beams of light that shine over lower Manhattan in silent tribute to those lost on 9/11 are an iconic symbol of hope visibly showing that light will always triumph over darkness," said Frank Siller, chairman and chief executive of the foundation. 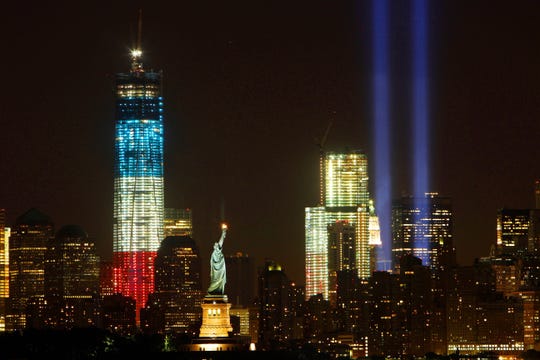 Last week, the foundation decided to hold an alternative 9/11 Never Forget ceremony after the National September 11 Memorial & Museum announced that family members won't read the names of the nearly 3,000 victims this year because of the pandemic.

The foundation's tribute will be held just south of the memorial plaza and relatives will read the victims' names, with mask-wearing enforced and podiums being sanitized after each speaker.

COVID what's next: What went wrong during first spike and how Northeast is preparing for another

The exact location of the twin beams display has yet to be determined, said officials with the foundation, a charity founded to honor the memory of New York City firefighter Stephen Siller, who died in the attacks and was Frank Siller's brother.

It's not clear yet where exactly the light display will be located, foundation officials said.