Across the nation, queer people are debating fast-tracking major life changes, expecting that rights they now have could be stripped away.

This story was published in partnership with The 19th, a nonprofit, nonpartisan newsroom reporting on gender, politics and policy.

Carl Charles never liked guns. The product of a conservative military family in Colorado, Charles resisted learning to shoot at a young age. When he was in high school, the Columbine High School massacre — which his friends survived — cemented his fears.

“I think with the dangers inherent in what a really virulent conservative majority on the Supreme Court could mean for many people, not just LGBT people, but in particular, I’m thinking about LGBT people of color… I started to think about that need to protect myself and my family,” he said. 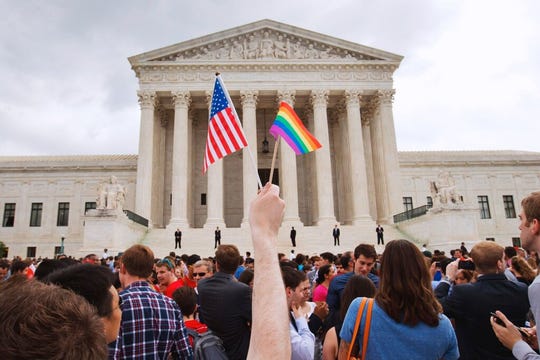 Charles is transgender, and his husband is a Black man. The couple is very visibly queer, he says. They’re planning a move from New York to Atlanta, a city that Charles describes as a blue dot “in the middle of a very big red sea.”

And so, all things considered, Charles has concluded he might need guns. He’s learning how to use them.

In uncertain moments like these, LGBTQ+ advocates typically reassure their communities that, even in a worst case scenario, the law will protect them. But Charles isn’t just another queer person trying to read the tea leaves. He’s a staff attorney at Lambda Legal, the nation’s largest LGBTQ+ legal organization. He’s among the legal team battling Trump’s military ban. With a 6-3 conservative court, he thinks some of the hardest-won gains for equality could be on the chopping block.

“I think what’s plausible, and will probably be first and foremost, is marriage equality,” Charles said. “But I don’t think that will be a one track attack for them. I think they’ll be doing all of this simultaneously,” adding that a number of trans rights cases are currently making their ways through the courts.

Amy Coney Barrett was our professor. She'll serve America as well as she served her students.

Transgender student Gavin Grimm’s five-year battle with his Virginia school board to use a boy’s bathroom at his high school is likely to hit the Supreme Court after an appeals court twice ruled in his favor. And a case involving Drew Adams, another transgender student who won his federal case in Florida to use a bathroom at his high school, might also be headed to the Supreme Court.

Trump announced federal judge Amy Coney Barrett as his nominee for the Supreme Court vacancy left by Ginsburg's death. Lambda lawyers said all the top contenders for Trump's nomination fall far short of Ginsburg’s legacy when it comes to applying the law fairly for LGBTQ+ Americans. 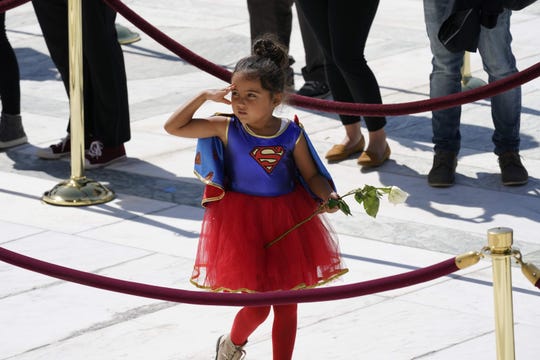 A child in a Supergirl costume pays respects as Justice Ruth Bader Ginsburg lies in repose in front of the U.S. Supreme Court in Washington, D.C., on Sept. 23, 2020. (Photo: Alex Brandon/Pool)

Lambda Legal and 26 other LGBTQ+ advocacy organizations vociferously opposed nominee Amy Coney Barrett during her 2017 confirmation to the 7th Circuit, referencing her affiliation with Alliance Defending Freedom, an anti-LGBTQ+ legal organization that the Southern Poverty Law Center has designated as a hate group. Barrett also signed onto a letter that praised the Catholic church’s teachings “on marriage and family founded on the indissoluble commitment of a man and a woman.”

Charles isn’t the only one worrying that LGBTQ+ gains at stake. Across the nation, queer people are debating fast-tracking major life changes, expecting that rights they now have could be stripped away. Trans and nonbinary people report trying to quickly access gender-confirming medical care out of fear that the Affordable Care Act will be struck down, and their insurance companies will stop covering transgender surgeries and hormones. There is a rush to put through legal name changes.

Erin Taylor, 24, and her girlfriend never talked about getting married before. The couple has been together for a year.

“I don’t want to super speed up the process,” said Taylor. “I want to be able to do it on my own time.”

For Taylor, she thought that looked like getting married in five years and maybe adopting kids after that. Ginsburg’s death, however, forced her to rethink the timeline.

“Five years from now, is this going to be possible in the same way?” she asked. “You can’t really know the answer.”

Four of Charles’ Lambda colleagues laid out their concerns in a Facebook live event about what a 6-3 conservative Supreme Court could mean.

“There are many threats in the legal realm to the rights of LGBTQ people,” said Lambda Litigation Director Diana Flynn. “But perhaps the most eminent one is the assertion of religious objections to compliance with the civil rights laws.”

Most immediately, queer legal experts are eyeing Fulton v. City of Philadelphia, a case over whether Philadelphia rightfully terminated a foster care contract with Catholic Social Services after the agency refused to place kids in same-sex households. 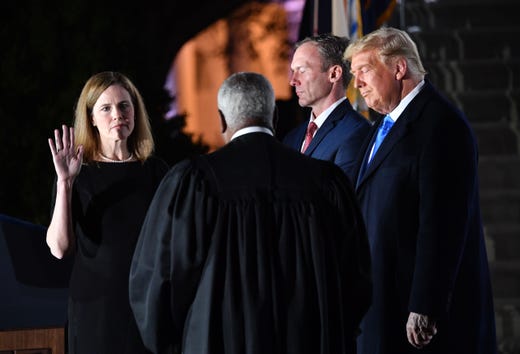 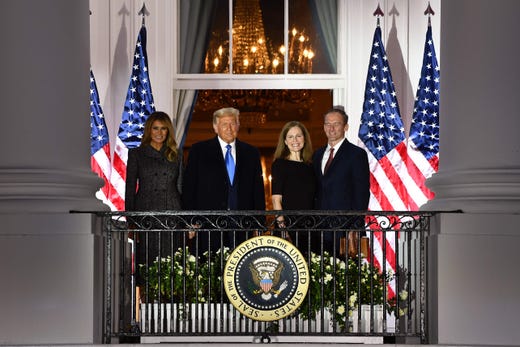 US President Donald Trump and US First Lady Melania Trump stand with Judge Amy Coney Barrett and her husband Jesse M. Barrett on the Truman Balcony after she was sworn in as a US Supreme Court Associate Justice during a ceremony on the South Lawn of the White House October 26, 2020, in Washington, DC. Brendan Smialowski, AFP via Getty Images
Fullscreen 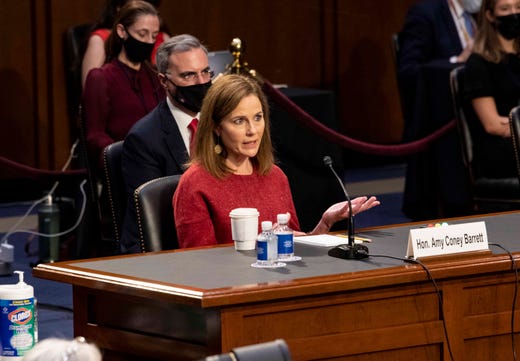 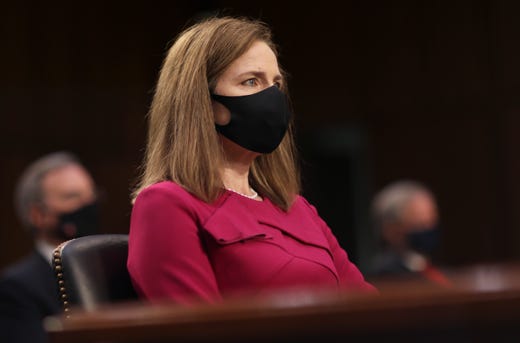 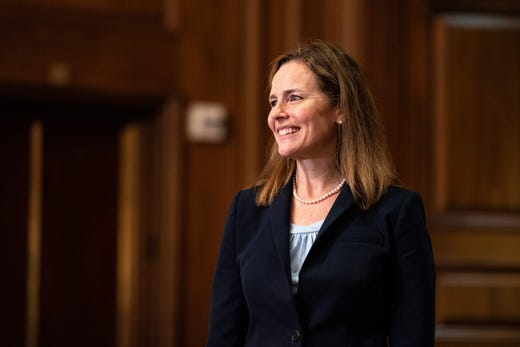 Judge Amy Coney Barrett is nominated to the US Supreme Court by President Donald Trump in the Rose Garden of the White House in Washington, DC on Sept. 26, 2020. Barrett, if confirmed by the US Senate, will replace Justice Ruth Bader Ginsburg, who died on September 18. OLIVIER DOULIERY, AFP via Getty Images
Fullscreen

President Donald Trump, first lady Melania Trump, 7th U.S. Circuit Court Judge Amy Coney Barrett, and her family walk along the Rose Garden Colonnade after Trump announced Barrett as his nominee for the Supreme Court at the White House Sept. 26, 2020 in Washington, DC. With 38 days until the election, Trump tapped Barrett to be his third Supreme Court nominee in just four years and to replace the late Associate Justice Ruth Bader Ginsburg, who will be buried at Arlington National Cemetery on Tuesday. Chip Somodevilla, Getty Images
Fullscreen 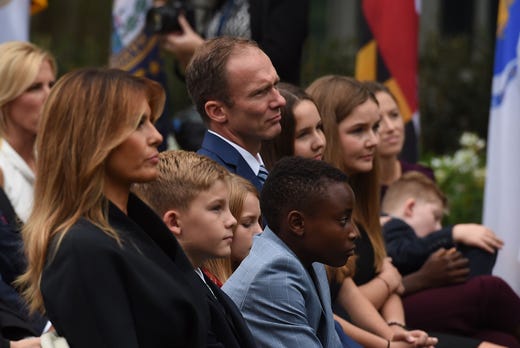 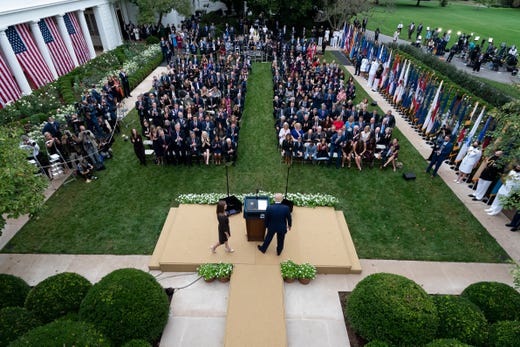 President Donald Trump announces Judge Amy Coney Barrett as his nominee to the Supreme Court in the Rose Garden at the White House on Sept. 26. Alex Brandon, AP
Fullscreen 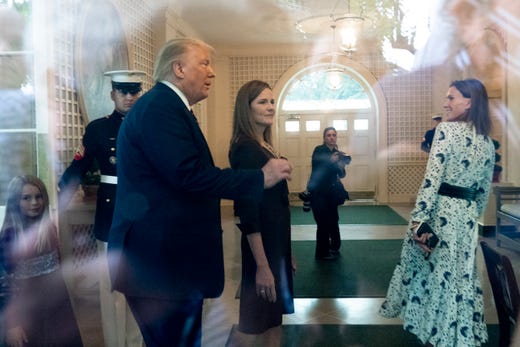 In an image taken through a window, President Donald Trump, left, and Judge Amy Coney Barrett, walk through the Palm Room after announcing Barrett as his nominee to the Supreme Court, in the Rose Garden at the White House, Saturday, Sept. 26, 2020, in Washington. Alex Brandon, AP
Fullscreen 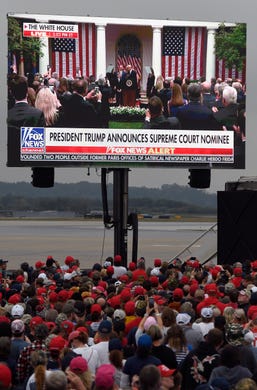 Supporters of President Donald Trump watch on television as he announces Judge Amy Coney Barrett as his nominee to the Supreme Court during a Trump campaign rally at Harrisburg International Airport, Saturday, Sept. 26, 2020, in Middletown, Pa. Steve Ruark, AP
Fullscreen 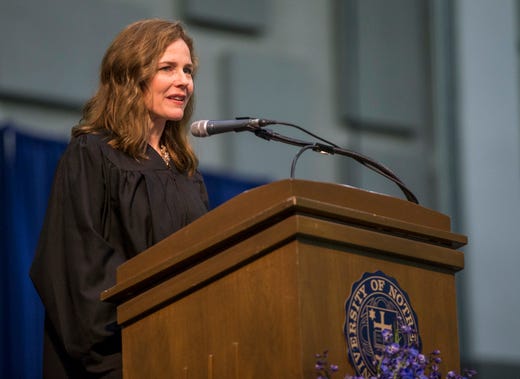 In this May 19, 2018, file photo, Amy Coney Barrett, United States Court of Appeals for the Seventh Circuit judge, speaks during the University of Notre Dame's Law School commencement ceremony at the university, in South Bend, Ind. Barrett, a front-runner to fill the Supreme Court seat vacated by the death of Justice Ruth Bader Ginsburg, has established herself as a reliable conservative on hot-button legal issues from abortion to gun control. Robert Franklin, South Bend Tribune via AP
Fullscreen 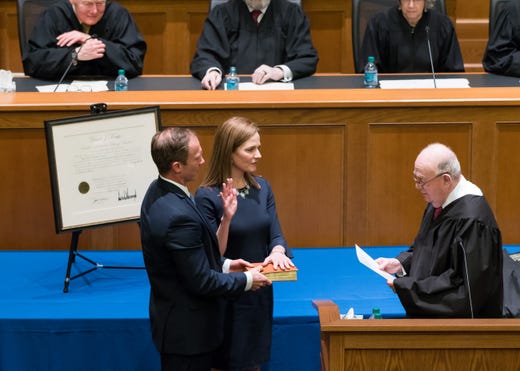 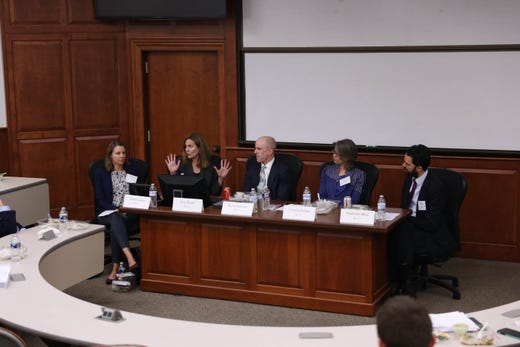 Karen Loewy, senior counsel for Lambda Legal, stressed that the case has far-reaching implications. Exemptions for government contractors could mean that LGBTQ+ seniors lose access to safe housing and meal programs, she said.

Kenneth Upton, senior litigation counsel for Americans United for Separation of Church and State, said it’s cases like Fulton, where plaintiffs are seeking exemptions from discrimination law, that worry him.

Texas, he points out, has no statewide LGBTQ+ anti-discrimination protections. From repealing anti-sodomy laws to granting marriage equality laws, the state legislature has never passed a pro-LGBTQ+ measure. Queer people in the Lone Star State have gained the rights they have entirely through the courts.

“Even if the Supreme Court were to undo everything, it doesn’t automatically fall back to where it was. It’s up to the states,” Upton said. “Would they reinstate sodomy laws in Texas? I don’t know that they would. Maybe enough things have changed. I’m not convinced that they would continue to let gay people get married.”

Alphonso David, president of the Human Rights Campaign, the county’s largest LGBTQ+ organization, believes that marriage equality is settled law. But he also echoes the concerns from other advocates about protections against discrimination.

“What I do see is the risk that the court could allow individuals on the guise of religious liberty to discriminate against gay couples, as they exercise their fundamental rights in marriage,” he said.

He believes religious exemptions to pro-equality laws could render them largely meaningless. Hospitals could have a right to deny queer spouses hospital visitation. Queer married couples could lose parenthood rights to non-biological children if they don’t adopt them. Essentially, he fears that marriage for LGBTQ+ people would be largely symbolic.

Brad Polumbo, a gay conservative writer and journalist, thinks those fears are overblown. He points to the court’s historic LGBTQ+ ruling in June, in which a conservative-majority court voted 6-3 in favor of nondiscrimination workplace protections.

“I think the extent to which conservative judges are hostile to LGBT rights is exaggerated and catastrophized,” he said. “If we want to talk about other issues outside of gay marriage, maybe there’s some more substantive action that could happen, and some of it could be bad or wrong,” he said, adding that he thinks a conservative court would uphold trans rights passed into law by Congress but fall short of doing so on their own.

David Brown, legal director at the Transgender Legal Defense and Education Fund, is also optimistic, not just because they don’t see the court reversing itself.

“Most people’s access to health care, by and large, is not because of ACA,” they said, adding that most major companies’ health plans cover trans surgeries, and several states also mandate that coverage. “The impact would probably be the biggest on folks who lose coverage entirely.”

A full repeal, they think, is unlikely in a pandemic.

While LGBTQ+ legal experts caution against panicking, they are telling their clients now might be the time to tie up those legal loose ends.

“Am I saying people need to rush to the courthouse and get married after they’ve gone on three dates over Zoom with someone? No, that’s not what I’m encouraging folks to do,” Charles said. “What I am saying is if you’re in a position to do those things, and you’ve been thinking it’s not necessary or you wouldn’t need those protections, I think there’s a good argument to be made that you might.”