The justices' order establishes the ground rules for mail-in voting in one of the nation's key battleground states, with 20 electoral votes.

Many states are planning on drastically different elections this year and mail-in ballots could be a big game changer. USA TODAY

WASHINGTON – The Supreme Court ruled Monday that absentee ballots in Pennsylvania can be received up to three days beyond Election Day, setting a precedent that could apply to some other states as well.

Because of the 4-4 tie, the lower court ruling by the Pennsylvania state Supreme Court stands and that court had ruled in favor of a three-day extension.

The justices' order establishes the ground rules for mail-in voting in one of the nation's key battleground states, where President Donald Trump and former vice president Joe Biden are fighting hard for its 20 electoral votes.

The ruling could have an impact in other states where the deadline for mail-in ballots has been the subject of court battles. Those include Michigan, North Carolina, Wisconsin, Minnesota, Georgia, Indiana and Montana.

More: Supreme Court is shorthanded but could play role in election

The state's Democratic Party initiated the legal action in Pennsylvania, urging state courts to extend the Nov. 3 ballot return deadline in light of the COVID-19 pandemic that presents risks for in-person voting. State Attorney General Josh Shapiro, a Democrat, also said the date should be extended, and the state Supreme Court agreed. 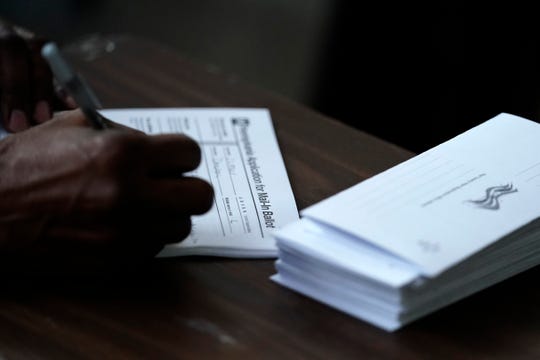 That left the state Republican Party and state Senate leaders to defend the original Election Day deadline. They asked the U.S. Supreme Court to block the state court's ruling as a violation of federal law, which sets Election Day as the first Tuesday in November. They also said the extension violates the Constitution.

"This is an open invitation to voters to cast their ballots after Election Day, thereby injecting chaos and the potential for gamesmanship into what was an orderly and secure schedule of clear, bright-line deadlines," Jason Torchinsky, the lawyer for state Senate leaders, said in court papers.

"In a year where there is a very real possibility that the final presidential election result hinges on Pennsylvania, the new rules imposed by the decision of the Supreme Court of Pennsylvania (a body elected in partisan elections) could destroy the American public’s confidence in the electoral system as a whole," he wrote.

Democrats countered that because of the state court ruling, officials already have advised voters that ballots can be received until Friday, Nov. 6. As a result, they said, a reversal would add to confusion and invite additional litigation in other states.

Nationwide, more than 300 election-related lawsuits have been filed, largely as a result of problems associated with COVID-19 and the expansion of voting by mail. Republicans, including Trump's reelection campaign, generally seek to limit such voting, while Democrats want to expand it.

The Supreme Court has been involved since April, when it ruled 5-4 along ideological lines that absentee voting in Wisconsin could not be extended past the primary election date. Most recently, it ruled that South Carolina can keep its requirement that absentee ballots include witness signatures.

More cases are headed to the court over the way mail-in ballots are distributed, delivered and counted in an election that Trump claims, without proof, has been rigged against him. 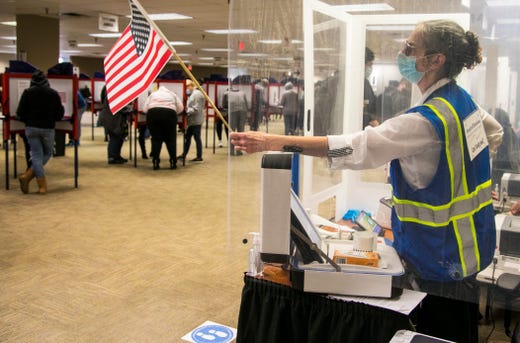 Lois VonHandorf, a Hamilton County Board of Elections worker, waves her flag to let the next voter know she's available for check-in, Sunday, Nov. 1, 2020. There were long lines, but the line moved steadily. Nov. 3, is Election Day. Liz Dufour/The Enquirer
Fullscreen 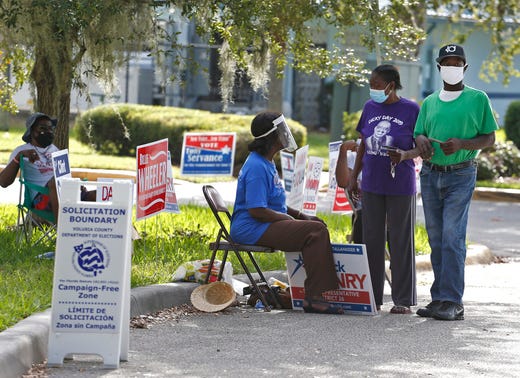 Voters prepare to cast their ballot at the Midtown Cultural Center in Daytona Beach on the last day of early voting, Sunday, Nov. 1, 2020. Nigel Cook/News-Journal
Fullscreen
Women gathered for Stroll to the Polls event, dancing on the streets towards a polling booth in downtown Patagonia on Friday, Oct. 30, 2020, is a town in Santa Cruz County, Ariz. 2020 marks the 100th anniversary of the 19th Amendment for women's constitutional right to vote. Nick Oza, The Arizona Republic/ USA TODAY Network
Fullscreen
Lines stretched for several blocks as New Yorkers lined up to vote at Madison Square Garden in Manhattan during the third day of early voting Oct. 27, 2020. Seth Harrison, The Journal News / USA TODAY Network
Fullscreen 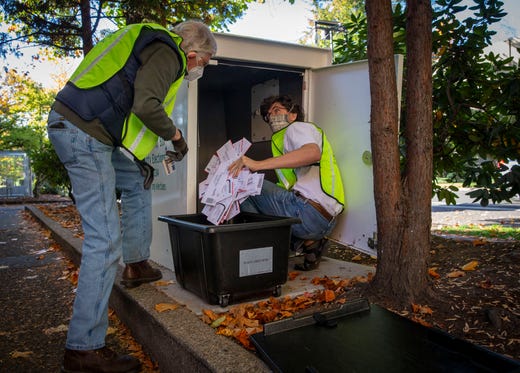 Lane County Elections workers David Campbell, left, and Matt Eva remove ballots from the dropbox at the election offices on Charnelton Street on Oct. 26, 2020, in Eugene, Oregon. More than 40 percent of ballots have been returned by voters in Lane County. Andy Nelson, The Register-Guard - USA TODAY NETWORK
Fullscreen 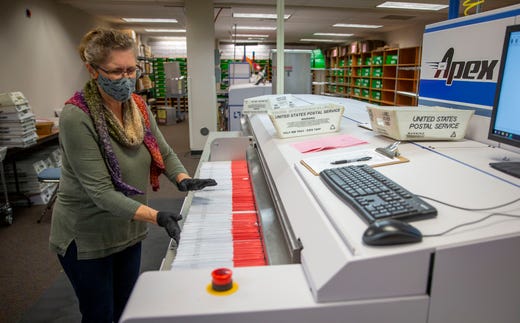 Lane County Elections worker Elaine Erwin prepares ballot envelopes before they are scanned for signatures on Oct. 26, 2020, in Eugene, Oregon. More than 40 percent of ballots have been returned by voters in Lane County. Andy Nelson, The Register-Guard - USA TODAY NETWORK
Fullscreen
The Friends of Mt. Hope have placed plastic covers over Susan B. Anthony's headstone in Mt. Hope Cemetery in Rochester, NY as well as her sister's Mary Anthony's headstone. "I Voted Today" stickers on their headstones, Oct. 26, 2020 have been placed on them since early voting started Saturday. The covers are to protect the old headstones. Tina MacIntyre-Yee, RochesterDemocrat and Chronicle / USA TODAY Network
Fullscreen

A voter walks toward election officials who are wearing face shields, mask and gloves at a Vote Center located at the Staples Center on the first weekend of early in-person voting on October 25, 2020 in Los Angeles, California. Voters in Los Angeles County are now able to vote in person at any Vote Center located within the county. Mario Tama, Getty Images
Fullscreen 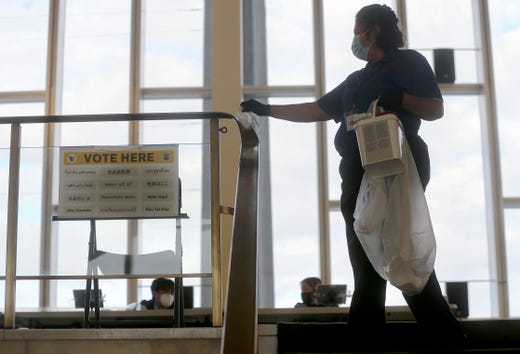 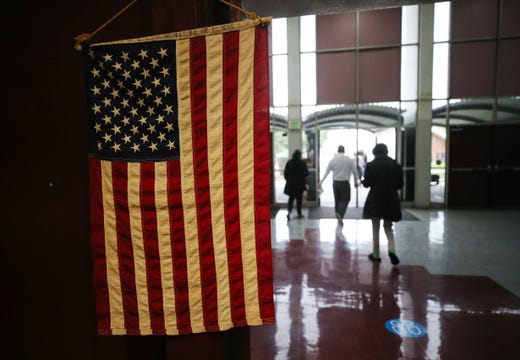 People walk out of a Vote Center located at Compton College on the first weekend of early in-person voting on October 25, 2020, in Compton, California. Voters in Los Angeles County are now able to vote in person at any Vote Center located within the county. Mario Tama, Getty Images
Fullscreen 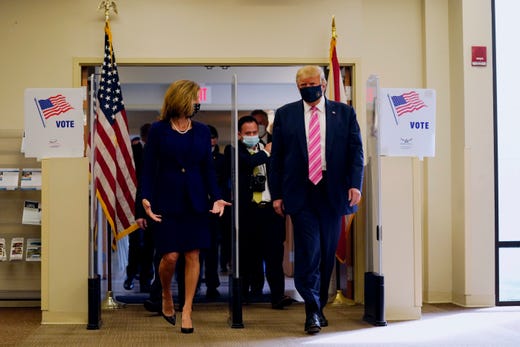 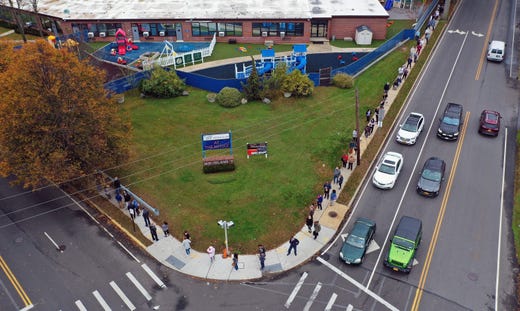 In an aerial view from a drone, residents wait in line for the opening of an early voting location at the Mid-Island Y Jewish Community Center on October 24, 2020 in Plainview, New York. Bruce Bennett, Getty Images
Fullscreen 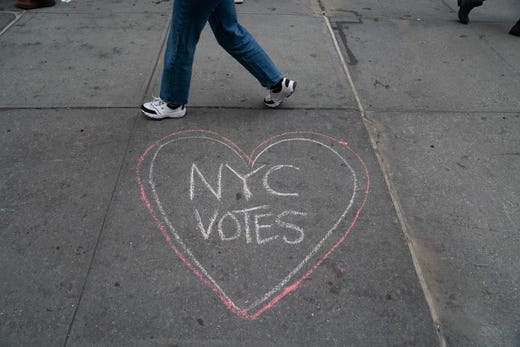 People walk past chalk messages on the sidewalk outside Madison Square Garden on the first day of early voting, in New York City on October 24, 2020. Bryan R. Smith, AFP via Getty Images
Fullscreen 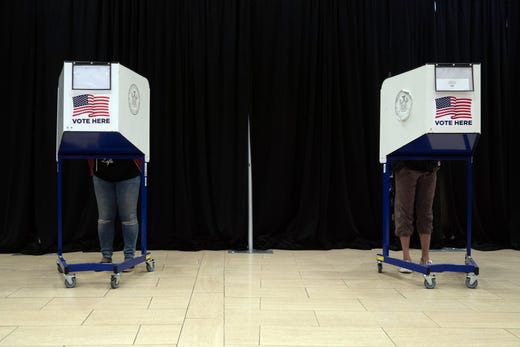 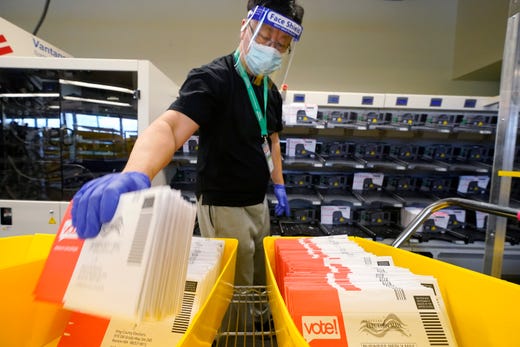 An election worker moves returned ballots from a sorting machine behind at the King County Elections office Tuesday, Oct. 20, 2020, in Renton, Wash. Election officials there said that 280,000 county ballots had already been returned, nearly 20% of the total sent to voters. Washington state is one of five states, along with Colorado, Hawaii, Oregon, and Utah, that conduct elections entirely by mail-in voting. Elaine Thompson, AP
Fullscreen 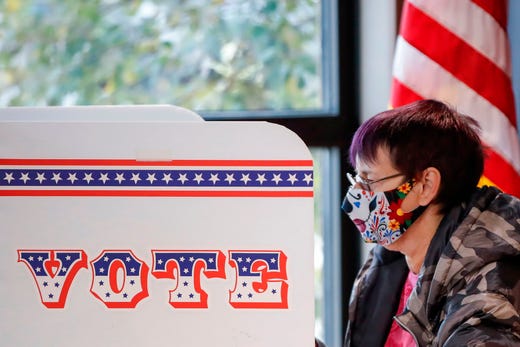 A woman casts her ballot at Tippecanoe Library on the first day of in-person early voting for the November 3rd elections in Milwaukee, Wisconsin, on October 20, 2020. Kamil KrzaczynskiI, AFP via Getty Images
Fullscreen

People wait in line to vote outside of an early voting site, Tuesday, Oct. 20, 2020, in Miami Beach, Fla. Florida begins in-person early voting in much of the state Monday. With its 29 electoral votes, Florida is crucial to both candidates in order to win the White House. Lynne Sladky, AP
Fullscreen

Genie Georgen, left, and Luann Zimmerman wait to receive their ballots for in-person absentee voting at the Neenah City Hall Tuesday, October 20, 2020, in Neenah, Wis. Dan Powers, USA TODAY NETWORK-Wisconsin
Fullscreen
Poll workers receive Vote-by-Mail ballots in a drive thru system setup at the Election Headquarters polling station on Oct.19, 2020 in Doral, Florida. The poll workers placed the ballots into an official ballot drop box after receiving them. The early voting ends on Nov. 1. Voters are casting their ballots for presidential candidates President Donald Trump and Democratic presidential nominee Joe Biden. Joe Raedle, Getty Images
Fullscreen
Cook County jail detainees check in before casting their votes after a polling place was opened in the facility for early voting on Oct. 17, 2020 in Chicago, Ill. It is the first time pretrial detainees in the jail will get the opportunity for early voting in a general election. Nuccio DiNuzzo, Getty Images
Fullscreen 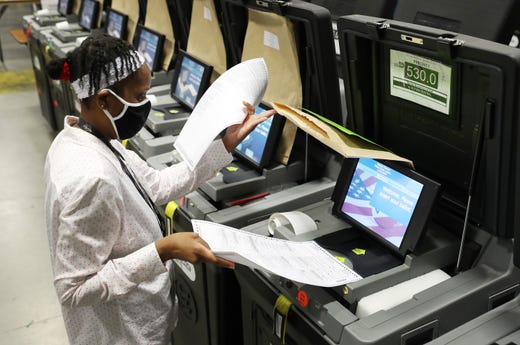 A Miami-Dade election worker feeds ballots into a voting machines during an accuracy test at the Miami-Dade Election Department headquarters on Oct. 14, 2020 in Doral, Florida. The test was done as the county prepares for the November 3rd election where President Donald Trump and Democratic presidential candidate Joe Biden are facing off against each other. Joe Raedle, Getty Images
Fullscreen
Harris County election worker Romanique Tillman prepares mail-in ballots to be sent out to voters Sept. 29 in Houston. David J. Phillip, AP
Fullscreen 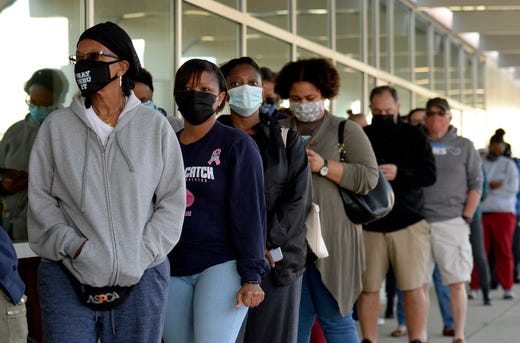 People wait in line to fill out a ballot at the Southeast Library on Hickory Hollow Parkway on the first day of early voting on Wednesday, October 14, 2020, in Antioch, Tenn. Other states have reported big turnouts in early voting for the November presidential race. Mark Zaleski for The Tennessean
Fullscreen

People vote at the Southeast Library on Hickory Hollow Parkway on the first day of early voting on Wednesday, October 14, 2020, in Antioch, Tenn. Mark Zaleski for The Tennessean
Fullscreen 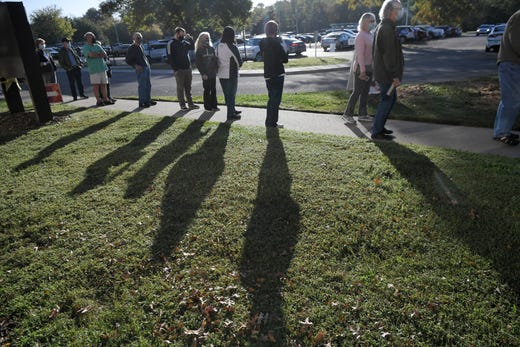 Several hundred voters line up before the polls open at the Williamson County Administrative Complex during the first day of early voting Wednesday, Oct. 14, 2020 in Franklin, Tenn. Shelley Mays, The Tennessean
Fullscreen 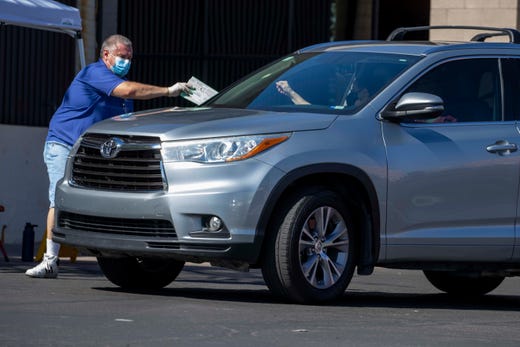