Trump’s widely discredited claim — and Carson’s initial support of Trump’s remarks — has resulted in even more false claims, as both candidates try to explain their statements. 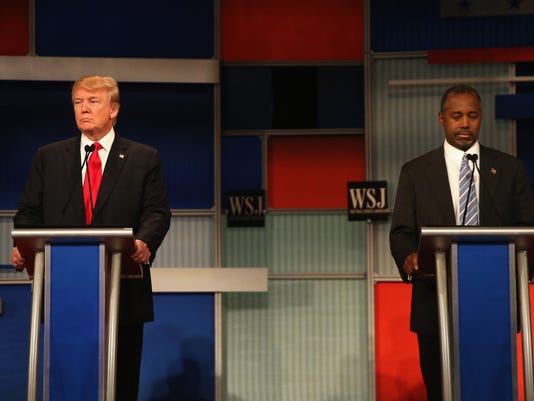 Donald Trump and Ben Carson take the stage at the start of the Republican presidential debate on Nov. 10, 2015, in Milwaukee.(Photo: Scott Olson, Getty Images)

Donald Trump’s widely discredited claim that Muslims in New Jersey were seen on TV cheering the 9/11 terrorist attacks — and Ben Carson’s initial support of Trump’s remarks — has resulted in even more false claims, as both candidates try to explain their statements:

• Trump doubled down on his false claim that he saw on TV “thousands and thousands” of Muslims cheering in New Jersey. He demanded an apology and cited as his support one news story about an alleged incident that was unattributed, unverified and not televised.

• Carson later clarified his remarks about 9/11, saying he was talking about news footage of Muslims celebrating overseas, not in New Jersey, and blaming the media for having an “agenda.” He’s revising history. He was asked twice if what he saw was in New Jersey, and he said “yes” both times.

It was in a Nov. 21 speech in Alabama that Trump first made his claim about Muslims in New Jersey celebrating the fall of the World Trade Center on Sept. 11, 2001.

A day later, on ABC’s This Week, Trump insisted: “It did happen. I saw it. It was on television. I saw it. There were people that were cheering on the other side of New Jersey, where you have large Arab populations. They were cheering as the World Trade Center came down.”

There is no evidence, as others have pointed out, that thousands of people in New Jersey cheered the attacks on 9/11. PolitiFact and the Washington Post gave Trump’s claim their worst ratings.

The fact is that New Jersey and New York news organizations tried to track down rumors and unverified reports of celebrations in New Jersey cities and turned up little or nothing.

The Star-Ledger, New Jersey’s largest newspaper, wrote on Sept. 13, 2001, about “persistent rumors — repeated all day on talk radio and on the Internet” — that Muslims were celebrating in the streets of Paterson, New Jersey. That story did not contain any mention of Jersey City nor did it provide any evidence that the rumors in Paterson were true.

The New York Daily News dispatched a reporter to Paterson shortly after the attacks to investigate the same rumors and came up empty. In a Sept. 14, 2001, story, the Daily News quoted an unidentified police officer saying there were no public celebrations in Paterson. “I patrol these streets every day and I haven’t seen one person with a smile on their face at the mention of this tragedy,” the officer told the Daily News. “The people here are suffering and mourning like everyone else.”

On Sept. 18, 2001, the Associated Press wrote that federal investigators had returned to Jersey City — specifically to the neighborhood that had been “home to a mosque where blind sheik Omar Abdel-Rahman preached before he was convicted of plotting the 1993 bombing of the World Trade Center and other New York City landmarks.” But there was no mention of any 9/11 celebrations in Jersey City. Instead, the paper wrote of “Arab-Americans [who] decried the terrorist attacks, and told of harassment they had suffered in the past week.”

The Star-Ledger revisited the rumors again in a Sept. 23, 2001, story about the rise of bias incidents against Muslims and Arabs. John Farmer Jr., who was the state’s attorney general at the time, told the Star-Ledger that reports of rooftop celebrations in Paterson were an “insidious rumor” that was helping to fuel the rise in bias incidents. The Star-Ledger said of the rumor of celebrations: “[I]n the end it was nothing more than a rapid-fire urban myth.”

That story did say, however, that the paper interviewed two people who said they knew of one incident in Paterson regarding “a small handful of teenagers who shouted ‘revenge’ the night of the bombing.” There was no mention of Jersey City.

Update, Nov. 25: Farmer told The New York Times in a story published Nov. 25 that the New Jersey State Police received reports on the day of the attacks that “Muslims were dancing on the rooftops and in the streets of Jersey City and Paterson.” Those reports were investigated and found to be false, Farmer said. “We followed up on that report instantly because of its implications,” Farmer told the Times. “The word came back quickly from Jersey City, later from Paterson. False report. Never happened.”

On Nov. 23, two days after he first made his 9/11 remarks, Trump claimed to have evidence that supported him. He tweeted out a link to a Sept. 18, 2001, Washington Post story and demanded an apology.

Via @washingtonpost 9/18/01. I want an apology! Many people have tweeted that I am right! https://t.co/CpsMxs54qvpic.twitter.com/wrDEhXJlvR

The Post story said that Jersey City police detained “a number of people” who were “allegedly seen celebrating the attacks and holding a tailgate-style party” in Jersey City. That allegation was unattributed and unverified. Even if it did happen, and there is no evidence of it, the celebrating was not on TV and did not involve “thousands and thousands of people.”

The Washington Post Fact Checker talked to both reporters on the Post story cited by Trump, and neither could recall if the allegations about the tailgate-style celebration were verified. “I specifically visited the Jersey City building and neighborhood where the celebrations were purported to have happened,” said Fredrick Kunkle, one of the Post reporters on that story. “But I could never verify that report.”

What’s clear to us — and should be to Trump — is that there were no widespread televised celebrations in New Jersey on 9/11. In fact, what Trump described would have been big news, and the reporters at the Daily News, Star-Ledger and elsewhere who tried and failed to track down rumors of 9/11 celebrations could have just turned on the TV to get their story.

In an interview on Nov. 23, Carson told reporters in Nevada that he had seen “newsreels” of Muslims in New Jersey cheering the attacks.

“Well, you know, there are going to be people who respond inappropriately to virtually everything. I think that was an inappropriate response. I don’t know if on the basis of that you can say all Muslims are bad people. I really think that would be a stretch,” Carson said.

The next day, he denied that he was talking about New Jersey and blamed the media for a “misunderstanding.”

“I thought we were just talking about the fact that Muslims were inappropriately celebrating,” he said. “I didn’t know that they had an agenda behind the question.”

We don’t know what Carson was thinking about when he was answering the questions, but the exchange between two reporters and Carson could not have been more clear. In fact, he was asked to verify that the video he saw was of Muslims in New Jersey, and he answered, “yes.”

Here is the relevant portion of the exchange:

Reporter 1, Nov. 23: Dr. Carson, were American Muslims in New Jersey cheering on 9/11 when the towers fell — did you hear about that or see that?

Reporter 1: Yes. Can you expand on that?

Carson: Well, you know, there are going to be people who respond inappropriately to virtually everything. I think that was an inappropriate response. I don’t know if on the basis of that you can say all Muslims are bad people. I really think that would be a stretch.

Reporter 1: But did you see that happening though on 9/11?

Carson: I saw the film of it, yes.

Unlike Trump, Carson at least now acknowledges that it’s not true that thousands of Muslims were captured on TV celebrating in New Jersey on 9/11. But in doing so he rewrites the record.