What history has shown us about contested elections and peaceful transitions of power. USA TODAY

Monessen, Pennsylvania, doesn't get a lot of presidential visits.

But on June 28, 2016, Republican presidential nominee Donald J. Trump arrived in the old steel mill town and promised he would bring back steel, coal and the working-class jobs of a bygone era.

It was what some voters had waited decades to hear, especially blue-collar voters in Monessen who still talked about how the Wheeling-Pittsburgh steel mill helped to build the Golden Gate Bridge in San Francisco.

Like many old Rust Belt towns in southwestern Pennsylvania, there's more nostalgia in Monessen than jobs. Closed businesses still line many streets, serving as a reminder of the bustling community Monessen used to be.

Wheeling-Pittsburgh once employed more than 2,000 workers, and Monessen was once home to more than 20,000 people. Now, the population is about a third of that. The median household income is about $27,000.

On that June day four years ago, Trump traded in his usual campaign slogan of "Make America Great Again" for an amended one.

"We're going to make America wealthy again," Trump said at Alumisource, a recycling plant that used to be Wheeling-Pittsburgh steel and employs about 35 people. “It will be American steel that sends our skyscrapers soaring, soaring into the sky.” 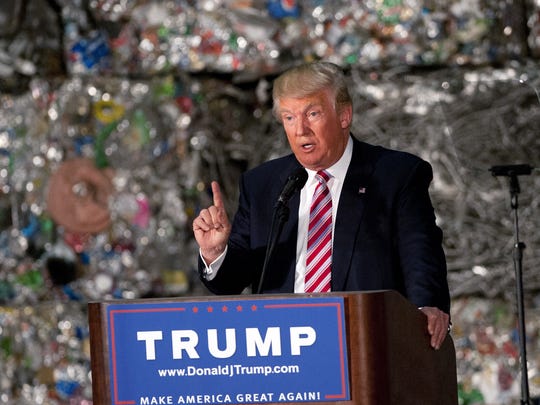 A crowd of about 200 watched at Alumisource and thousands more watched at home, as all of Trump's stops were covered by cable news networks then.

"It sounded pretty good to me," said Carl Domito, a 78-year-old Trump supporter and retired laborer in Westmoreland County who watched from home. "I think he said what a lot of people had been waiting to hear. He won my vote that day."

Monessen is still a Democratic city in Westmoreland County, but the rest of the county has turned red since Trump was elected.

A big part of Trump's appeal among men is his promise to bring back jobs, according to Peter Navarro, the White House director of trade and manufacturing policy.

"The legacy of Pennsylvania steelworkers lives in the bridges, railways and skyscrapers that make up our great American landscape," Trump said. "But our workers' loyalty was repaid with betrayal."

Trump is repeating that message this year when he visits old mill towns in Pennsylvania, but now he's assigning blame to his 2020 Democratic challenger Joe Biden.

This time around, Trump is focusing less on coal and steel industries, which continue to lose jobs. Instead, he is making the Pennsylvania energy fight about fracking, which he claims Biden wants to ban. Biden during a Pittsburgh campaign stop this month said he does not want to ban fracking.

Biden in Pa.: 'Do I look like a radical socialist with a soft spot for rioters?' 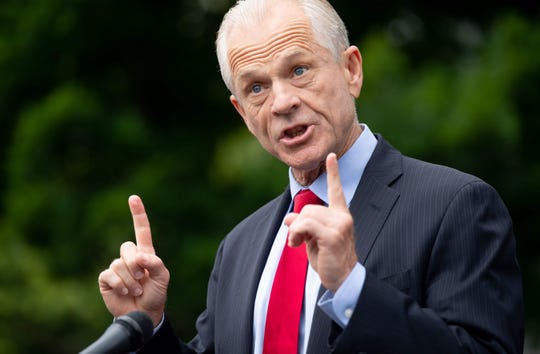 Peter Navarro, an assistant to President Trump, is the director of the Office of Trade and Manufacturing Policy. (Photo: Saul Loeb/AFP via Getty Images)

Navarro, in an interview with the USA TODAY Network's Pennsylvania Capitol Bureau, said Trump kept his promises that he made four years ago when he revealed his jobs plan in Monessen.

"Biden voted for NAFTA. He voted for including China in the World Trade Organization," Navarro said. "Those two decisions led to hemorrhaging of thousands of factories and millions of manufacturing jobs."

The Trump economy was creating jobs before the pandemic hit. But since then, 4.7 million jobs have been lost, according to the U.S. Department of Labor.

Trump now owns the biggest employment decline of any president in modern history, but Navarro is pointing to the economy before the coronavirus.

He's remembering the tax cuts, deregulation, bigger defense budget and trade deals that he said led to a time of prosperity.

"There were historic low rates of unemployment, including for Blacks, Hispanics, veterans, women," Navarro said. "That was our plan."

The spread of COVID-19 thwarted that plan.

"We had to lock down the economy, but we are fighting our way back," he said.

That includes manufacturing personal protective equipment, vaccines and testing swabs in the U.S.

And the choice is clear in the election, Navarro said.

More: 'I don't really remember the Obama presidency': Why Trump and Biden debate matters in Pa.

More: Ginsburg's death is raising the stakes in the Pa. presidential election: 'It's enormous'

All the president's Pennsylvania men

Trump is losing ground in every Pennsylvania poll, but he's still getting his highest marks on the economy, and his most reliable support is among white, working-class men 50 and older in southwest and northeast Pennsylvania.

Bill Woodward, an 82-year-old retired telephone worker in Bucks County, is one of those voters.

He voted for Democrats in his younger years but has voted for Republicans for decades.

Woodward said he will be voting for Trump "without a doubt."

"Just look at what he's done for the stock market," Woodward said. "Democrats just want more government and more taxes. That would be a disaster for the country."

Another disaster has been the Democratic viewpoint on the pandemic, he said.

"Shutting down America is totally wrong," Woodward said. "Trump has not wanted to shut America down, and I commend him for that. The president has done a good job during the pandemic against all the bickering."

If Trump wins Pennsylvania again, it will be because of strong support among older men, analysts say.

“They felt left behind by the Democratic Party, economically and culturally,” said Terry Madonna, pollster and political scientist at Franklin & Marshall College. 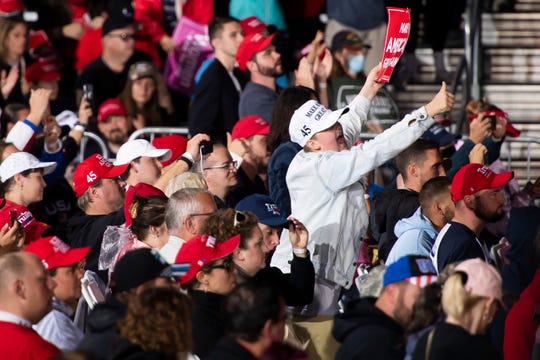 Supporters of President Donald Trump cheer as the president speaks about his support for law enforcement during a campaign rally at Avflight Harrisburg at the Harrisburg International Airport on Saturday, September 26, 2020, in Middletown, Pa. (Photo: Dan Rainville, USA Today Network - Pennsylvania )

The largest demographic of these voters helped Trump win the Steeler Country corner of the state, including Beaver, Fayette, Washington, Westmoreland and Greene counties.

Allegheny County, where Pittsburgh is, reliably voted for a Democrat, as did Philadelphia.

But Trump won Erie, which had voted for Obama four years earlier, and he lost Scranton only by a few thousand votes.

“Trump’s probably going to live or die politically on the economy," Madonna said. "He will have to make the argument to blue collar workers that he’s made things better.”

Biden gets big boost from women 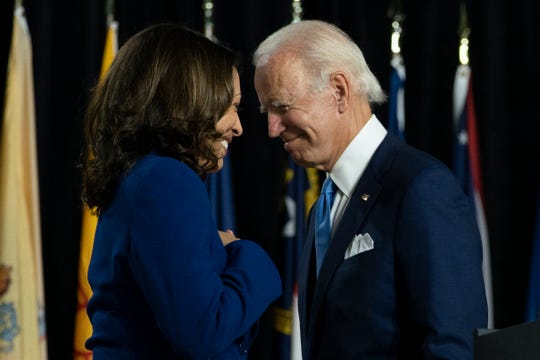 Biden supporters aren't as concerned about which promises Trump might have kept before the coronavirus created a new normal.

They are focused on the biggest promise he didn't keep.

"He did not make America great again," said Cheryl Gregorio, a 63-year-old retiree in Luzerne County. "Not even close."

She points to the biggest public health crisis in 100 years that shut down Pennsylvania for months. The racial injustice and protests that filled city streets. The steady flow of news that yields more questions than answers about the president's character and judgment, including recently revealed information about his tax records.

Gregorio will be voting for Biden this year because she's looking for a candidate who is civil and decent to "bring peace to the country." 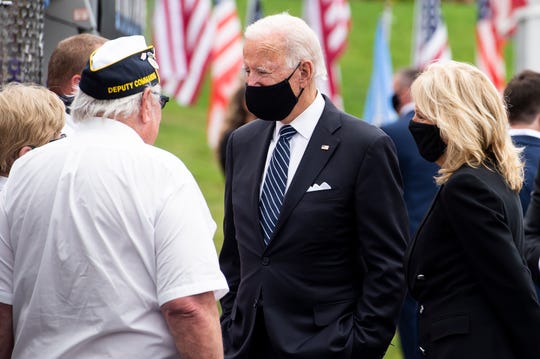 Sarah Eagan, a 23-year-old Montgomery County resident and Pennsylvania press secretary for NextGen America, said Biden is a better choice for her and other young voters.

The issues that matter most to them include affordable health care, affordable college, and racial equity and justice.

Biden CNN town hall in Pa.: 3 takeaways from a battle between Scranton and Park Avenue

Biden is also the best choice for seniors, according to Addie Hickson, a Philadelphia resident and Black voter in her 80s.

"Trump has been a mess," she said. "Hopefully, Biden can get us out of that mess."

Hickson voted by mail in the Pennsylvania primary, but she plans to go to her polling place in Philadelphia and cast a ballot in person on Election Day.

"Too much is at stake," she said. "I want to know my vote counts immediately."

Hickson is telling everyone she sees that they "better vote this time," she said. "With the coronavirus and racism, our lives really depend on it."

Joe Biden’s newly-announced running mate, Kamala Harris, has the approval of 87 percent of Democrats as the potential VP. Buzz60

"If Biden wins the election, it will be on the backs of Pennsylvania women," said Jesse White, a Democratic strategist at Perpetual Fortitude, a Harrisburg consulting firm.

Two new polls released Tuesday show Biden with a 9-point lead in Pennsylvania, thanks in large part to suburban women in the counties that surround Philadelphia.

Biden is appealing to these voters in large margins because of Trump's handling of the coronavirus and swiftly nominating federal Judge Amy Coney Barrett to fill the Supreme Court vacancy left by the recent death of Justice Ruth Bader Ginsburg.

Clinton had a smaller lead at this point in the race four years ago and she easily won the Philadelphia suburbs in 2016, including support from Republican women. But it wasn't enough to offset Trump's gains in the Rust Belt counties.

That trend of women voters continued in 2018 during a so-called pink wave that sent 110 women to the U.S. House and Senate, including four congresswomen from Pennsylvania.

More: 126 women are on the ballot in Pa., and you might be surprised why they're running

“College-educated women voted in strong numbers in 2016 and 2018, and in 2018 they were a big reason Democrats were able to flip seats,” Madonna said.

These women make up one of the biggest voting blocs in Pennsylvania, and they’re electing women and Democrats, he said.

Madonna expects this trend to continue in November.

Chris Borick, a political science professor and director of the Muhlenberg College Institute of Public Opinion, agrees that college-educated women are an important voting bloc to watch.

In Pennsylvania, where 44,000 votes separated the candidates in 2016, every vote matters, he said.

But analysts agree women might be the most consequential voting group in Pennsylvania, which FiveThirtyEight predicts will be the tipping point in the 2020 election and won by Biden.

"Pennsylvania women will definitely have a big role in deciding which of these men will win the presidency," Borick said.