With about a week to go until Election Day, Joe Biden's loudest campaign message is the uncontrolled pandemic that has changed American life.

Larry Orr grew up with Joe Biden in Scranton, Pa. The pair went to the same elementary school and played baseball for the Green Ridge Little League. York Daily Record

During an unexpected afternoon stop in Chester, Biden said he will visit battleground states all week, as Trump made three campaign stops in Pennsylvania Monday.

"I just want to make sure we can earn every vote possible," Biden said. 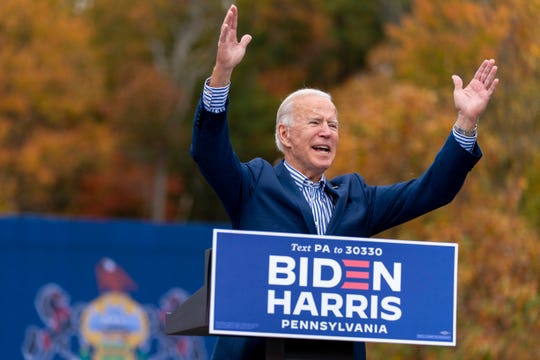 The Democratic challenger is ahead by 5 points in Pennsylvania, according to the RealClearPolitics average of polls. He also holds similar leads in Wisconsin, Michigan and Minnesota, and he has smaller leads in Florida, Iowa, Arizona and North Carolina.

But the sting felt by Democrats four years ago, when party nominee Hillary Clinton had a lead in battleground states and lost, is not a distant memory.

"You know me, I am not overconfident about anything,” Biden said Monday.

In a short speech outside of a Delaware County voting center, Biden focused on what Trump didn't during his Pennsylvania campaign stops: the coronavirus.

"Trump said we're learning to live with it. No, he's asking us to learn to die with it," Biden said, repeating a campaign refrain.

As of Monday afternoon, there were more than 187,000 positive cases of COVID-19 in Pennsylvania and more than 8,600 deaths. Across the country, cases are surging in multiple states and many areas are reporting record hospitalizations.

With about a week to go until Election Day, Biden's loudest campaign message is the uncontrolled pandemic that continues to sicken and kill Americans, hurt the economy and disrupt American life.

Trump's top message is focused on energy and the economy, which worked for him in 2016.

Biden said he hoped to carry Pennsylvania “by the grace of God” and winning here, in the state where he grew up, is personal to him.

'I am home': Biden’s Pa. roots could run from a Scranton kitchen table to the presidency

Always a battleground: Is Pennsylvania the most important swing state in the 2020 election?

He said he's confident about his chances in Michigan, Wisconsin and other battleground states.

“The blue wall has to be reestablished,” Biden said.

Biden also said he has a “fighting chance” to win Ohio, North Carolina and Georgia, where Trump has typically led in the polls.

Earlier in the day, Biden took criticism for not having a busier public schedule, or at least one that seemed to mirror Trump's.

Biden pushed back on that Monday, saying every day has been "a 12-hour day" for him. He also said his work isn't as visible because he has a different campaign style than Trump, who defies state and federal public health guidelines by hosting rallies with thousands of supporters.

The Democratic challenger has said, as president, he would "shut down the virus and safely open up the economy."

“We can in fact end this crisis,” Biden said of the coronavirus. Trump “is not doing what needs to be done.”

Biden also reiterated that he would not shutdown or end the oil and gas industry in Pennsylvania or elsewhere, a claim Trump disputed during his campaign stops in Pennsylvania Monday.

After his brief remarks, Biden took a few questions, including one on how he would handle the Supreme Court.

Biden said he is not in favor of judicial term limits for the nation's highest court.

"There is a question about whether or not it’s a lifetime appointment," Biden said. "I’m not going to try to change that at all."

He reiterated his plan to create a bipartisan commission if he's elected that would study whether to add justices to the nine-member bench.

That group of Republicans and Democrats would have 180 days from the time he would be elected to the time he's sworn in to make their recommendation, Biden said.

The Democratic nominee said he will travel to Iowa, Wisconsin, Georgia, Florida "and maybe other places" as he campaigns during the last week before the election in which he is predicted by polls and analysts to defeat Trump.